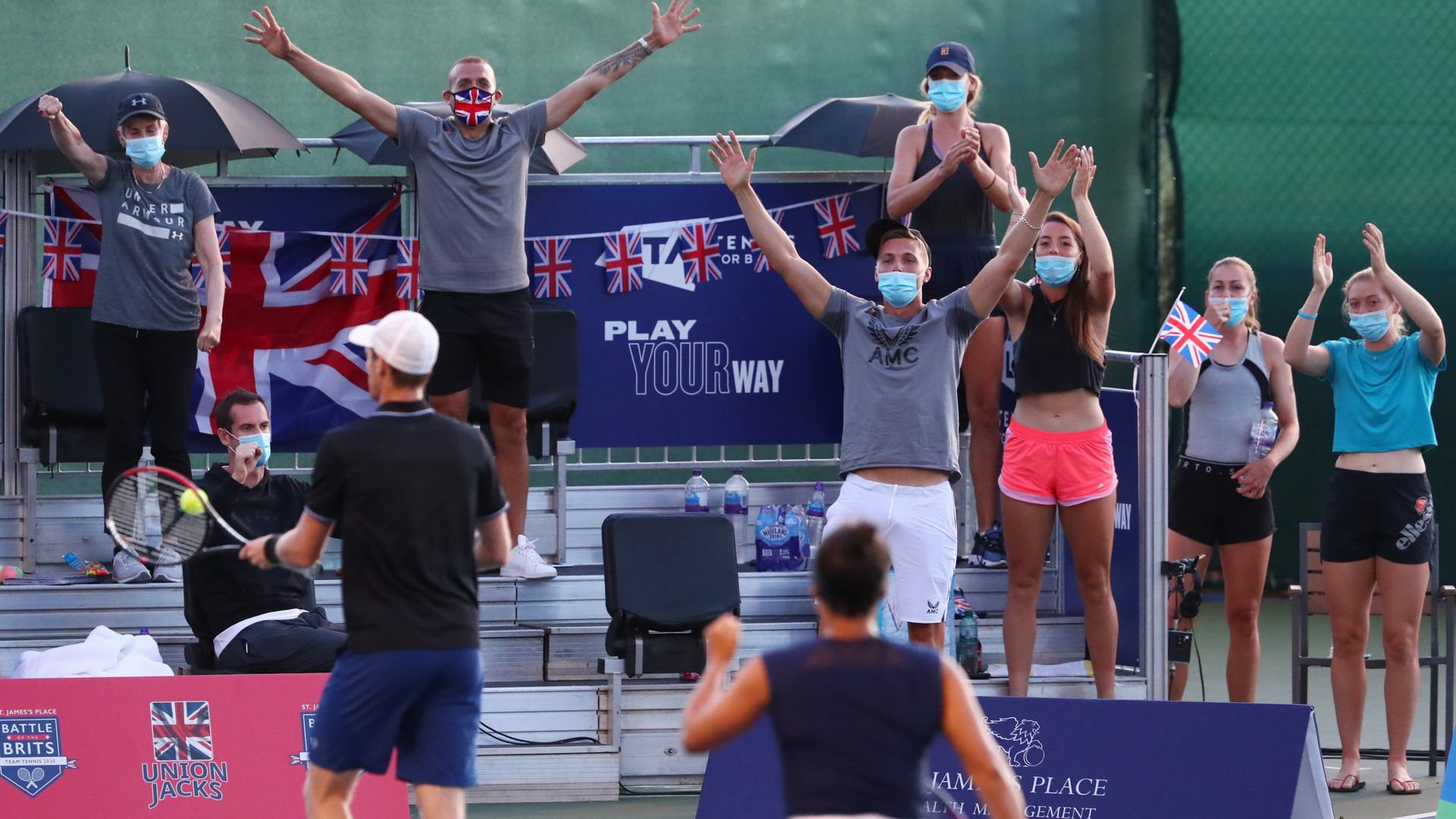 Gary Stewart, head of operations at the LTA: “One thing I’ve been really proud of is how the organisation has adapted so quickly to the changes which needed to be made”

On May 15, two brothers took to a tennis court in south west London for the first time since the lockdown period had been imposed. One was celebrating his 33rd birthday and the other was eager to remind his ‘lil bro’ that he could still run him around a bit on court…

Those two brothers were Andy and Jamie Murray and the court was at the LTA’s National Tennis Centre in Roehampton, it was the first day that it had re-opened its doors to elite athletes as it embarked on ‘Stage One – Return to Training’.

On that opening day, the Murray brothers took the opportunity to blow away a few lockdown cobwebs as did the British women’s No 1 Johanna Konta and Fed Cup players Harriet Dart and Katie Boulter.

For all, it marked the start of the ‘new normal’ for elite tennis players in Britian and represented the first steps on the road to returning to elite domestic competition, which is now taking place at the National Tennis Centre.

‘Project Restart’ or iterations of that project name have been in place across all sports since their postponements and Gary Stewart, head of operations at the LTA, has told Sky Sports exactly what was required to get the National Tennis Centre up and running again.

Stewart also highlights what continues to happen as they progress through the stages of fully returning to elite sport and how the National Tennis Centre has evolved in order to provide the best-possible facility for elite athletes and the wider tennis community.

“When lockdown came, we had a COVID-19 steering group which was interpreting the guidelines from the government and making recommendations to the executive team about what we should be doing as an organisation,” Stewart said to Sky Sports.

“We were having two phone calls a day because things were ever-moving and doing so at quite a pace. We might have thought that X was going to happen and then a section changed to mean we had to look at Y.

“One thing I’ve been really proud of is how the organisation has adapted so quickly to the changes which needed to be made and how we’ve been able to communicate to the wider tennis team.

“Whether that’s communication to the elite athletes who returned first to the National Tennis Centre, or to tennis clubs and players throughout the country, through infographics and details on the ‘new normal’.

“It’s been a privilege that as a sport we were one of the first [to return].”

As a nation we’re all getting used to certain elements becoming part of our daily lives – one-way systems, hand sanitiser stations at entrances of exits, temperature checks… the list continues as we continue to live with the presence of COVID-19 around us.

When it comes to a facility like the National Tennis Centre, the objective is to make it a seamless and safe environment for players. Individual measures may appear to be ‘simple’, it’s just a case of buying a lot of sanitiser units and putting them out some may say, however there’s so much more that is part of creating a safe environment.

The LTA’s chief medical officer Jo Larkin has also been at the heart of their response and was part of a wider CMO steering group which worked with the government. From the very start, Larkin was involved in every type of meeting; from those about operations and events, to establishing return to work policies and managing players’ individual needs and anxieties.

The writing of Standard Operation Procedures has been a big part of her role and Stewart’s too. SOPs are needed across all areas, for example Larkin created an external medical manual to provide guidance on levels of PPE, what to do in a cardiac arrest situation and to plan the medical environment.

“What sits behind everything, which has been keeping us all up, are risk assessments and SOP manuals,” Stewart said. “Everything needs to have a defined and correct process, and be communicated to everyone who comes to the National Tennis Centre.

“We are relentless in the pursuit of excellence with regard to all of the processes. Everyone is engaging with them; it doesn’t matter whether you’re the Chief Executive or someone at a different level, the process is the same.”

The level of detail is second to none. For example, once a player has had their temperature taken, which is done every single time they enter or leave the LTA’s premises, they sign a declaration form. This is scanned by one person and one person only; it’s encrypted to share with the medical team and then paper copy is destroyed for confidentiality reasons.

“In the early days, like when Andy and Jamie came on Andy’s birthday, the players marked their own balls as they weren’t allowed to use anyone else’s. We provided all of the balls, brand new ones every time, and a different marker pens for every individual. We also have personal hand sanitiser units for every player and coach to take with them.

“When they finished, they put the ball can into one bin and the balls in another. We then marked up those bins and after 72 hours the balls become able to use again. All of these protocols, and so many more, have had to be explained to the players.”

It is widely known that not all tennis events have acted with such a wealth of parameters in place, and the Adria Tour in June became recognised for all of the wrong reasons because of that.

“One thing that came out of the event held by Novak Djokovic was that the players all realised just how serious this is, which I’m sure they realised already,” Stewart said.

“We had no incidents in the week of the first competition back, just after that. And, we haven’t had any since as the British Tour, Progress Women’s Tour and Battle of the Brits Team Tennis continues.

“The players absolutely respect what we were trying to do. They understand if we pulled them up for social distancing or certain behaviours. They realise that it wasn’t us being pernickety – peoples’ behaviours have to change as a result of COVID-19.

“I’m really pleased that we’ve got the confidence of the players. We’ve had Andy, Dan [Evans], Kyle [Edmund], Heather [Watson], Jo [Konta], all of the top players feeling really comfortable and building really strong relationships with the staff because it’s a bit more of an intimate group, numbers wise, right now.

“One element I’m very conscious of, as other areas start to open at the NTC, is how we ensure that the environment still feels safe for the players.

“LTA members of staff are usually based here, so what needs to be in place when they start to return? We’re having conversations with Leon Smith and Iain Bates, the head of men’s and women’s tennis, about that. We’ve been very careful not to run before we can walk, all because safety is paramount.”

The role of the National Tennis Centre

COVID-19 meant that the National Tennis Centre has had periods with a limited number of athletes and LTA colleagues in it, and that has enabled the acceleration of a development project which was ongoing prior to the pandemic.

“There are four stakeholder groups that we’ve clearly defined for the NTC – I think that it’s fair to say that before, no-one really knew what the National Tennis Centre stood for,” Stewart said.

“Now, it’s about elite players, first and foremost. It’s a high-performance training venue and the No 1 goal is to make sure that they feel this is their home.

“We then have coaching, whether that’s high-performance or community coaching, so people will come here to take their coaching qualifications. We also have competition; at the moment, it’s just at the elite level but eventually it will filter down to regional, county and local levels.

“We took the decision that we want to be the tennis lab, we test things and if they work then we take them into the ‘marketplace’.”

From an elite players’ perspective so much work is being done to drive the high-performance side of the National Tennis Centre.

A state-of-the-art gym facility is in place, one of just two of its kind. There are bespoke areas which are exclusively for Davis Cup, Fed Cup and performance athletes.

ATP and WTA World Tour nets have been procured for courts, their four Italian clay courts sit inside a high-class temperature-controlled bubble and throughout, the look and feel befits the stature of the country’s top athletes.

The next steps for the Stewart, Larkin and all at the LTA will be continuing to keep their players at the National Tennis Centre safe, as well as maintain ongoing communication with tennis clubs, amateur players and coaches.

All are acutely aware that everything that they do now will define tennis for the next period of time and that their roles and decisions impact upon people’s health.

“Agile is the best word to describe how we as an organisation have been,” Stewart concluded. “Quick, well-thought through and safe decisions are being made and then shared with clear communication out to support tennis in this country.

“Out in the community tennis clubs are thriving; courts are full, membership numbers are growing and it’s our job as a governing body to make sure that people continue to play and engage with tennis, but do it safely.”