Fabio Wardley produced the best performance of his career to date to pick up his first title.

The heavyweight, from Ipswich, is managed by Dillian Whyte and entered the pro ranks on the back of just four white collar outings.

Wardley was taking on Simon Vallily, at Matchroom Boxing’s Brentwood headquarters, as part of the first instalment of the Fight Camp series. 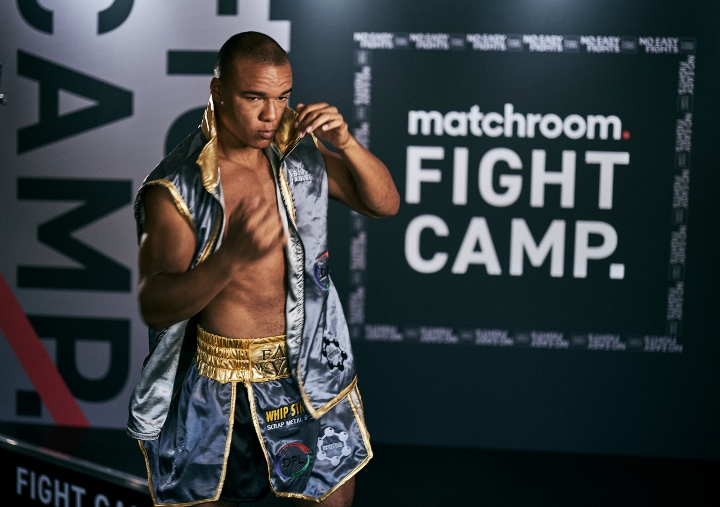 The aforementioned Whyte finishes the series on August 22 at the same venue when he defends his WBC interim heavyweight title against Alexander Povetkin on the same card as Katie Taylor’s rematch against Delfine Persoon for the WBA Super, WBO, IBF, WBC and Ring Magazine world female lightweight titles.

But it was Wardley, 25, who stole the show and provided the fireworks in week one as he competently dismantled Middlesbrough’s Vallily, a former Commonwealth Games gold medallist, in just three rounds on Saturday night.

The fight was over as quickly as it had started, really, with Wardley sizing up the task at hand before pouncing on Vallily in the third round.

The man who is managed by MTK Global was staggered by a big left hook and failed to recover, leaving the referee Howard Foster with very little option but to step in and halt the contest after a flurry of blistering shots on the ropes.

An end was called to the fight after just 61 seconds of the third round and the English title –– which was vacant –– was strapped around the shoulder of Wardley, who moved to 9-0 with eight quick.

“I started boxing just for a bit of a fun,” Wardley said in the aftermath. “I’m massive humbled and grateful.

“I think I did pretty well and I would say that it was near-on punch-perfect.”

Eddie Hearn, Wardley’s promoter, stated afterwards that the power-punching prospect could well feature on the same bill as his mentor Whyte in less than three weeks’ time.

Martin Bakole, Whyte’s fellow heavyweight, will box on the card, while there is also a rescheduled clash between Luther Klay and Chris Kongo on the bill for the former’s WBO Global welterweight title and Alen Babic, another fighter managed by Whyte, is set to see action.

Chan 2021: Rwanda have what it takes to beat Uganda – Sugira

Bairstow: Wins like this reward for ‘tough’ bubble life