As Bernard Hopkins tells it, he and trainer Naazim Richardson were a team for so long that they barely needed words to express their thoughts to each other.

“We had a connection without even talking. Me and Naazim been around each other so much that when he would nod his head at me I knew what he meant,” Hopkins told BoxingScene.com as he reflected on the untimely recent death of his cornerman. “When he’s talking it sounded like he was mumbling but to me it’s clear English.”

Richardson, who had multiple strokes in recent years, died on July 24 at age 54, leaving behind a wife, three sons and rich legacy as one of the most respected trainers in boxing over the past 25 years.

In fact, as Hopkins noted, in a business such as boxing where it is commonplace for there to be backstabbing and talk behind a person’s back, finding anyone to speak ill of Richardson is virtually impossible.

“There’s nothing anyone could say bad about him but I’m pretty sure he cursed a few times,” the 55-year-old Hopkins said. “What made him so respected was Naazim’s approach. He was like the cool uncle. He didn’t try to be your friend or tell you what you wanted to hear. He was the cool uncle in the gym. He always had his sound bytes and he spoke in a whisper but he told it to you straight about what you had to do. He said, ‘Swim without getting’ wet.’” 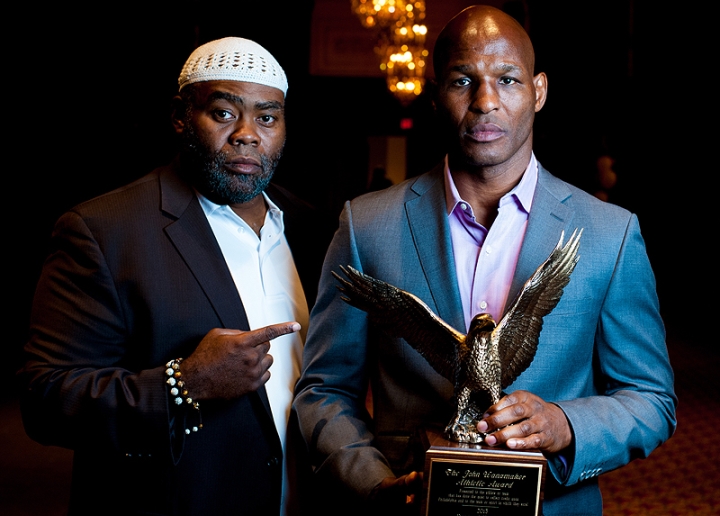 Hopkins was trained for much of his career by the late Bouie Fisher, who died in 2011, but he knew Richardson from the gyms around Philadelphia and the neighborhood where they both lived. Richardson was also well known for his work coaching amateur boxers, which would later include two of his sons, Rock, who represented the United States in the 2004 Olympics, and Tiger.

“We were very close in age, knew all the amateur coaches in Philadelphia,” Hopkins said. “We knew all the same people.”

Hopkins liked Richardson’s no nonsense style and knew his excellent reputation and said he asked Fisher to bring Richardson aboard as an assistant in late 1990s, when Hopkins was middleweight world champion. Richardson would remain an integral part of his Hopkins’ corner as either the top assistant or the head trainer for the rest of his career except for Hopkins’ career finale against Joe Smith Jr. in 2016, when Richardson was unable to work with him because of the effects of a stroke.

“When Bouie Fisher became more of the professor Naazim became the strategist and the eyes and ears I relied on,” said Hopkins, adding that because Richardson was 30-plus years younger than Fisher it was Richardson who was the one who was hands on with him in the gym when it came to holding the mitts and other physical activity.

“Naazim was the motor to the car, the engine, whatever word you want to use and Bouie became the reminder of me and Naazim,” Hopkins said. “Naazim was the energy, the strength and it was his way of how a fight should be approached.”

In early 2002, when Fisher and Hopkins went through a nasty breakup and the trainer sued Hopkins, claiming he had been underpaid for three bouts, Hopkins turned to Richardson to become his head trainer. Hopkins and Fisher reunited in late 2003 with Richardson staying as the top assistant. But when Hopkins and Fisher split again, this time for good after Hopkins lost his first fight (and the undisputed middleweight title) to Jermain Taylor in 2005, Richardson was promoted again to head trainer.

“I didn’t have to make any crazy adjustments. Naazim knew me, I knew him and he understood he wasn’t on any side other than the side of let’s keep winning and keep going,” said Hopkins, who added that he last saw Richardson in February. “We moved forward and we made history. We made a lot of history. He gave me the information I needed for a lot of years, kept my mind fresh and motivated me to continue to outdo myself.”

Richardson was the head trainer when Hopkins easily outpointed Antonio Tarver to win the light heavyweight title in 2006 and when he dominated Kelly Pavlik in 2008, both fights for which Hopkins was the underdog.

“I think Naazim is a Hall of Fame trainer. Hall of Famer, man,” said Hopkins, who will be inducted into the International Boxing Hall of Fame in 2021. “I tell you he’s definitely a strong candidate for the Hall of Fame.”

Richardson also trained Shane Mosley and former cruiserweight world titlist Steve Cunningham, among others, and was part of the 2018 reboot of “The Contender” reality series. He also famously protested Antonio Margarito’s hand wraps before the Mosley fight in 2009, convincing the California State Athletic Commission to force him to be re-wrapped, which was when illegal pads were discovered in his hand wraps. Richardson also protested the way Trinidad’s hands had been wrapped for the fight 2001 with Hopkins, leading to them being re-wrapped as well.

“What if he wasn’t on his game? What if he didn’t request this or that? Naazim always been a thorn in my opponents’ team or my opponents’ ass because he was always going to pick out the little and big things,” said Hopkins, who attended Richardson’s memorial service in Philadelphia on July 28.

“He was more on point than wrong when it came to strategizing, when it came to the officials, when it came to making a stink in the dressing room about certain things if the rules weren’t being carried out. Naazim Richardson was that guy. I don’t know what would have happened if he hadn’t of seen those gloves but Margarito damaged a lot of people before Shane exposed him.”

Hopkins and Richardson shared their Philly neighborhood, their Muslim faith and a bond that lasted for some 20 years.

“Naazim to me has been a mentor even though I was a year older than him,” Hopkins said. “Naazim has been a motivational man to me that actually made something out of nothing from where we come from. When I brought him in I told Bouie I needed to get better. It was my call. I loved Bouie to death but he was (slowing down). I said Bouie, ‘This is a team effort,’ and Bouie was fine with it. He knew Naazim and he knew Naazim had the knowledge and that he can agitate the other corner.

“He’s going to be a thorn in that ass because he would always pick and pick and pick. You need to get in your opponent’s head and you start with the trainer. And then you execute. He was a trainer that took stuff from Bouie, Freddie (Roach), Georgie Benton, Slim Jim Robinson. He took a page out of every Philadelphia legend and put it in his own arsenal and became a great trainer.”