The final hours prior to Xander Zayas’ 18th birthday will be spent in a boxing ring.

Plans are in place for the recent high school graduate and aspiring welterweight prospect to appear on the September 4 edition of Boxeo Telemundo, airing live from Osceola Heritage Park in Kissimmee, Florida. Zayas—who is promoted by Top Rank—will appear in supporting capacity against an opponent to be named on a show which will serve as the series’ summer season finale and still in the process of being assembled.

“We are thrilled to have Xander Zayas included on the show,” Felix ‘Tutico’ Zabala Jr. told BoxingScene.com. “We are still working on everything else, including the main event but look forward to working with Zayas and his team for this show and hopefully in the future.” 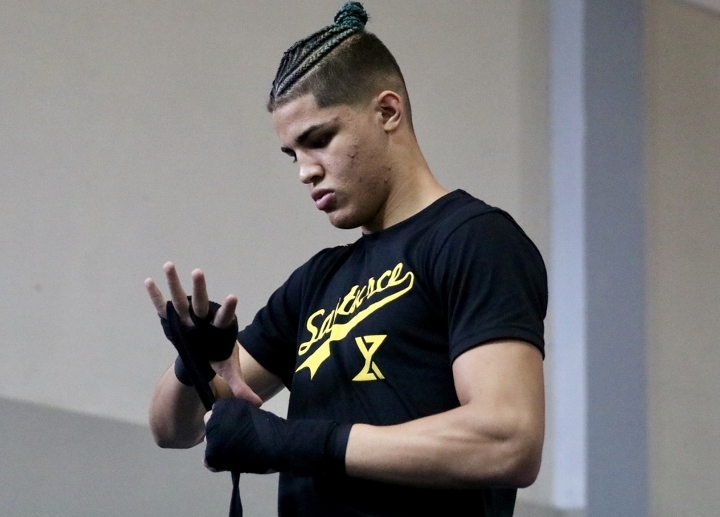 The bout will mark the first piece of ring action for Zayas (4-0, 3KOs) since a 3rd round knockout of Marklin Bailey this past February in Trujillo Alto, Puerto Rico, less than 30 minutes from San Juan where he was born and lived until he was 11 years old until relocating to South Florida.

Zayas will fight in his home state for the first time as a pro, with the event taking place on the eve of his 18th birthday. Due to age restrictions, his young career has remained limited to commissions which allow boxers 17 years of age or younger—Nevada, New Jersey and Puerto Rico all of which fall under those guidelines.

An approval process is in place to get Zayas licensed in Florida, since his birthday is the day after the fight and the Telemundo summer season ends on that date.

Following his aforementioned win in Puerto Rico, efforts to get Zayas back in the ring were stalled by the ongoing coronavirus pandemic. The blue-chip prospect instead turned all of his attention to his studies, having graduated from Plantation (Florida) High School this past May.

Remaining in his place was his commitment to the sport, being faithfully driven to and from the gym by his manager Peter Kahn. A playful discussion remains in play as to whether the 2019 BWAA Manager of the Year nominee will chauffer the young man three hours to Central Florida or brave air travel during the current global health crisis and make the hour-plus long flight.

More germane to Zayas’ future is whether or not he can establish himself as a future draw during the developmental stage of his career in his home state. The bulk of Telemundo cards take place in Central Florida and Mexico City, with the network’s home base of Miami reentering the fold earlier this year after a near decade-long absence.

Of course, those questions will be more relevant when venues are given clearance to once again sell tickets. All of the Boxeo Telemundo summer shows—which begin August 14 and run every Friday through Zayas’ appearance on the September 4 card—will take place behind closed doors, with all participants and assigned essential personnel required to submit to commission health and safety protocols.