That’s the word the unbeaten light heavyweight used upon learning he was losing on the scorecards entering the ninth round of his rematch against Marcos Escudero on Saturday night. George’s vicious left uppercut knocked out Escudero early in the ninth round and rendered the judges’ opinions meaningless.

Nevertheless, Houston’s George expressed dismay at how two judges had him behind in a fight he believes he clearly was winning at Mohegan Sun Arena in Uncasville, Connecticut.

“Wow! I didn’t know this,” George stated during a virtual post-fight press conference. “I would’ve said if I [hadn’t] knocked him out, [I was winning] unanimously. I didn’t see me losing not one round. Even when I was on the ropes, I was catching most of his shots. That’s crazy. … I’m very happy. That’s shocking to know I was losing the fight. Wow!” 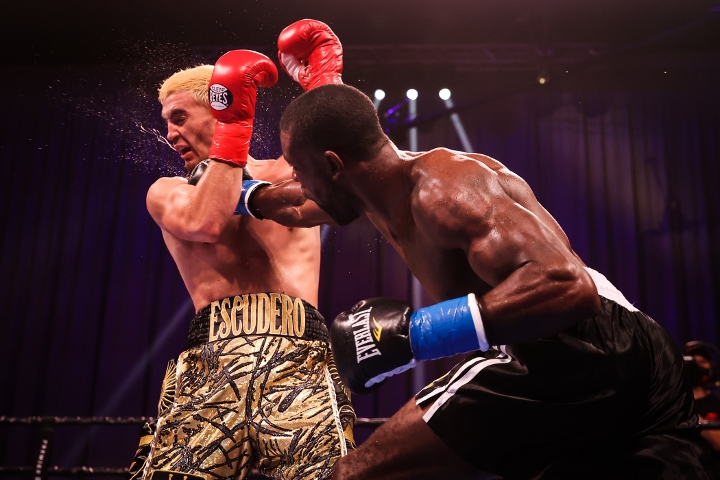 Judges Don Trella (79-73) and Steve Weisfeld (77-75) had Escudero in front following eight rounds. Judge Tom Carusone scored seven of the initial eight rounds for George (79-73), even though CompuBox credited Escudero for landing 39 more punches overall through those first eight rounds (124-of-587 to 85-of-290).

Steve Farhood, Showtime’s unofficial announcer, had Escudero ahead 78-74 at the time of the knockout as well.

“That’s surprising,” said George, who won a controversial split decision in their first fight, a 10-rounder Showtime televised November 15 from Sloan, Iowa. “I was boxing him the whole fight. Counter hooks, jabs, my right hands, body shots. My defense was making him miss. Even when I was on the ropes and letting him punch me, he probably caught me a couple times. But that was nothing. I can’t believe I was down. That’s surprising. But hey, I got the knockout, I got the [win].”

George (11-0, 7 KOs) drilled an exposed Escudero with the left uppercut that ended their fight as Escudero popped up after bending down to avoid George’s right hand. That devastating shot sent Escudero (10-2, 9 KOs) flat on his back 20 seconds into the ninth round.

Argentina’s Escudero couldn’t even attempt to get up before referee Danny Schiavone stopped counting at nine and waved an end to their scheduled 10-round rematch.

“I had him hurt a few times in the fight, early on with the left hook,” said George, who will move down to super middleweight for his next fight. “But the right hand that dropped him [late in the eighth round], I couldn’t believe they didn’t rule it a knockdown. But just like my coach, James Cooper, said, don’t worry about it, keep fighting, do it again. They couldn’t rule that one a slip because he didn’t get back up.”