David Benavidez was well aware of the extreme reactions he would receive over a poster where he is portrayed as the king of the super middleweight division.

Observers were either going to love it or—especially his divisional peers—take offense to the suggestion.

Needless to say, the public didn’t disappoint in voicing strong opinions on his manning a throne while his fellow super middleweight titlists literally bowed down at his feet.

“That’s the point I want to make. I’m the best super middleweight in the world,” Benavidez noted during a virtual press conference to otherwise discuss his August 15 title defense versus Roamer Angulo. “I understand that people will get mad. My mentality is that I’m the best, that nobody can beat me.

“I don’t care if people get mad. That’s the name of the game, beating the best to be the best.” 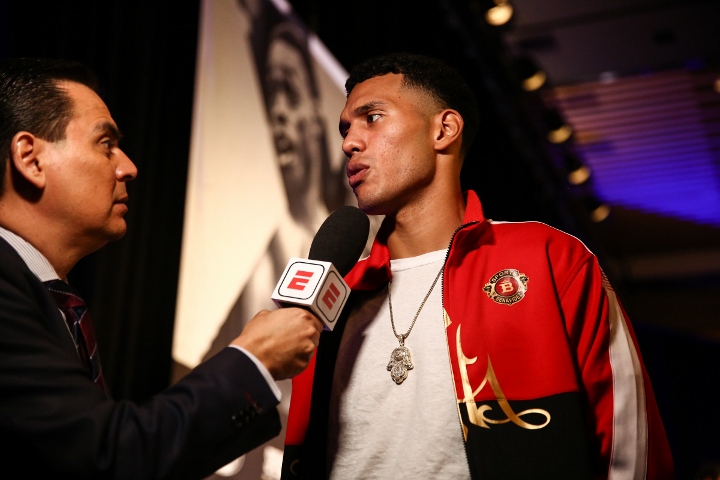 As it relates to the 168-pound division, there hasn’t been much of beating the best by those at the top level. All four unbeaten titlists—Benavidez (22-0, 19KOs), Las Vegas-based Tennessee product Caleb Plant (20-0, 12KOs), Callum Smith (27-0, 19KOs) of Liverpool, England and his countryman, Hatfield’s Billy Joe Saunders (29-0, 14KOs)—have their fair say in the conversation, primarily because they’ve yet to mix and match versus one another.

Such fights won’t threaten to happen anytime soon, and only with Benavidez currently scheduled to return in the near future. The 23-year old from Phoenix, Arizona was part of a block announcement for Showtime’s schedule through the rest of the year, as his bout with Miami’s Angulo (26-1, 22KOs) will headline an August 15 tripleheader on the network live from Mohegan Sun Casino in Uncasville, Connecticut.

Plans for the other three have yet to be announced, nor is there yet an opponent for a massive star hovering around the division.

Mexico’s Saul ‘Canelo’ Alvarez (53-1-2, 36KOs) is still on the hunt for someone to share the ring with for his next fight, whether it lands on September 12 or later in the year. Saunders has already removed himself from the mix, while Smith’s team is reportedly in talks with Alvarez. Plant remains rumored to land among those to appear yet-to-be-announced second half schedule for Fox Sports, though having previously stated he would be ready to face Alvarez in September if presented an offer and sufficient time to prepare.

Instead for the rising star will come the first defense of his second reign as a super middleweight titlist with his clash versus Angulo. The hope is that a win will lead to a steady stream of mixing and matching at the top level. After all, it’s the only way to bring his suggested art to life.