Ted Cheeseman believes his battles with a gambling addiction outside the ring will make him a better fighter inside it.

Cheeseman, the former British super-welterweight champion, faces Sam Eggington in the opening night of Fight Camp in the garden of Matchroom’s headquarters in Brentwood, Essex, on Saturday, but he has had his own share of problems on both sides of the ropes.

He looked on the verge of big things in 2018 when he won the British title to extend his unbeaten record to 15 fights. But he has not won since, losing a brutally one-sided fight against Sergio Garcia for the European title, before drawing with Kieron Conway and then losing his British title via a disputed decision to Scott Fitzgerald.

But Cheeseman was going through a lot of anguish outside the ring, as he blew all his money on gambling. When he took a 12-round beating from Garcia, he knew he had already spent all of his purse, so was effectively fighting for free.

He is now on a better path after seeking help from Gamblers Anonymous but there were times when he considered giving up boxing and giving up on life.

“The last year I had a lot of mad thoughts,” Cheeseman, 24, said. “I thought about retiring. I’m a fighter whether inside or outside of the ring. I will always just keep pushing.

“My goal was to become world champion when I started at 12 and to give myself the best chance to fulfil that target. But I’ve never done it. The troubles are my regrets but it ain’t about where the story started or in the middle, it is about where it ends.

“It is my chance to overcome those regrets and push on with my career and make sure I finish where I want to finish. I think that is going to make me the fighter I want and give me the story to push on it.” 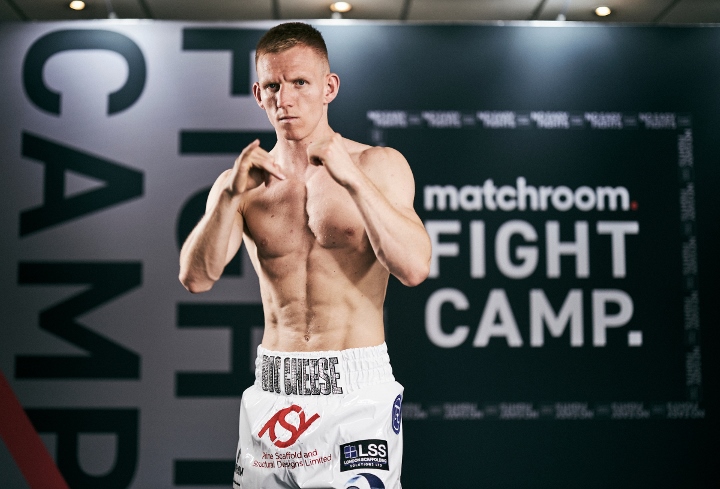 The coronavirus lockdown proved a good time for Cheeseman, as he was able to focus on training with none of the usual distractions.

“It has been the best period for me,” he said. “I live a very active lifestyle. I’m usually darting about after training, chasing a pound note but now the goalposts have changed and I’m fully focussed on boxing.

Cheeseman believes a good victory over Eggington, the former European welterweight champion, would show that his dark days are behind him.

“I’m confident I will win this fight and everyone will see I’ve overcome it all and how mentally strong I was to push through it and turn everything around,” he said. “This win will open so many doors.

“The Garcia fight was a blessing in disguise, the best thing that’s happened to me. I’d have loved to have gone from that and been 17-1. It shows how strong I am mentally to push a year or so on, to be confident and excited. I will still have the same determination. I’m not doing it for the money, I’m doing it to push on.”

Cheeseman is a partner in a building company, so that at least takes the pressure off when he steps through the ropes.

“I make phone calls and send emails, it’s not too hard, the stress is on my business partner,” he said. “If I did retire, I would put more hours in that. The focus now is not what I can earn out of boxing but it is about fulfilling the potential I feel I can reach. I don’t want to have regrets in 20 years that all I did was rush for a pound note.

“I think I’m too good for Sam. It is who is the better man on the night but I believe I’m better overall.”