Workpoint Studio, Bang Phun, Thailand – In a battle of former world champions, Srisaket Sor Rungvisai (48-5-1, 41 KOs) started very slow in the first half, but picked things up in the second half to win a ten round unanimous decision over countryman Amnat Ruenroeng (20-4, 6 KOs). The scores were 97-94, 96-93 and 99-91.

The contracted weight was close to the super bantamweight division, with 120-pounds being the limit.

Their fight had been previously postponed on more than one occasion due to the coronavirus pandemic. 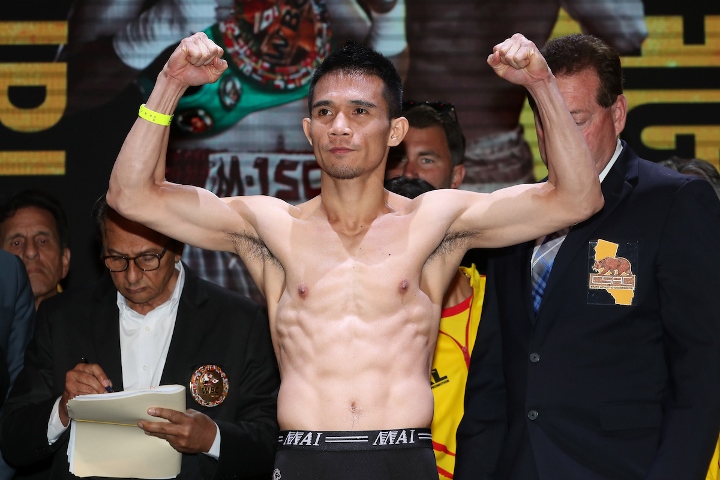 For Sor Rungvisai, this was his first bout since April of 2019 – when he lost a twelve round decision, and his WBC super flyweight title, in the rematch with Juan Francisco Estrada.

Ruenroeng, a former IBF flyweight champion, had been out of the ring since March of 2019, winning his last two after losing two in a row.

In the first two rounds, Ruenroeng did well with quick punches and was keeping his distance to avoid the power punch counters.

During the third round, Sor Rungvisai began to connect with good shots. As the action was heating up, there was a clash of heads that opened up a bad cut on left eyelid of Sor Rungvisai. The ringside doctor allowed the fight to continue, with the boxers trading a lot punches as Ruenroeng stood his ground.

Sor Rungvisai was stepping things up in the fourth, pressing forward and throwing big punches. Ruenroeng was doing well to avoid shots and frustrate the big puncher. Sor Rungvisai would eventually start digging to the body to slow his opponent down. Ring rust was certainly on display for Sor Rungvisai, who was unable to land flush and was getting caught with counters too often.

Ruenroeng continued to have success in the fifth, with Sor Rungsvisai continuing to step things and go toe the body. At the higher weight, Sor Rungvisai did not have the pop as he did at super flyweight.

In the sixth, Sor Rungvisai was finding his groove and putting together a lot of punches. The seventh round saw Sor Rungvisai come out pressing hard, firing a lot of hard punches, as Ruenroeng was not doing as much in return.

Sor Rungvisai went right back to work in the eight. Ruenroeng, at 40-years-old, seemed tired and wasn’t doing as much work for the first two minutes – but then stood his ground to fight in close in the final minute of the round. In the ninth, there were a lot of punches raining down from Sor Rungvisai. He was coming forward and letting the punches fly on a tired Ruenroeng.

In the tenth and final round, Sor Rungvisai was walking down his man and throwing a lot of combinations. Ruenroeng did well to block or avoid many of the punches, but wasn’t throwing a lot in return.