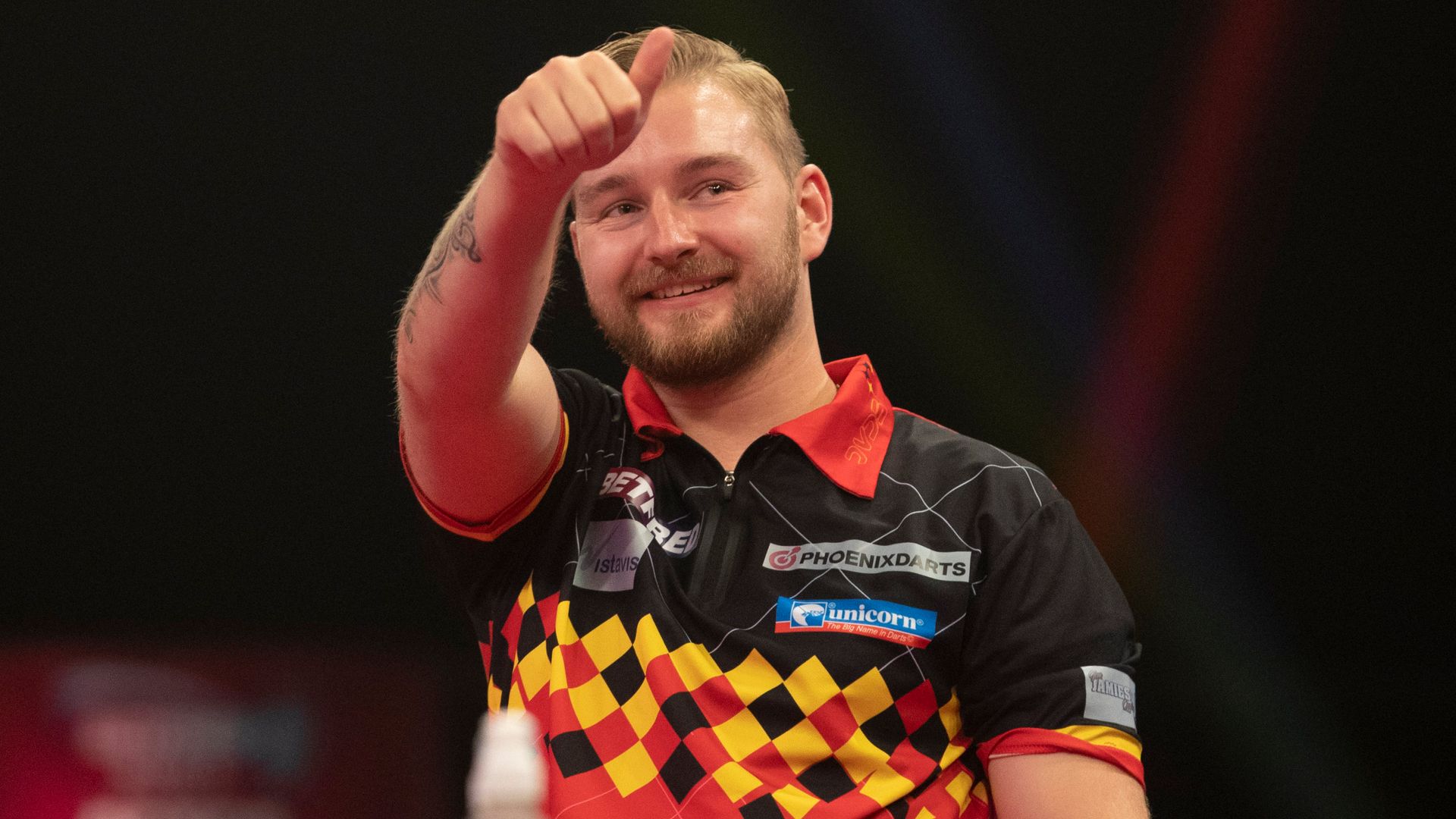 Darts is back on Sky Sports next month, as the Premier League returns with six consecutive nights of action getting underway on Tuesday, August 25

It’s 1.30am in the morning and Dimitri Van den Bergh has tweeted a picture from his hotel room in Milton Keynes, a slice of pizza in hand and the Belgian sitting on the edge of his bed to make room for the Phil Taylor Trophy glistening beside him.

The supper of the 2020 World Matchplay champion, who only hours earlier had beaten Gary Anderson by eight clear legs in the final to cap a staggering debut in the competition.

“The pizza was called the garlic sizzler,” he reliably informs The Darts Show podcast. “I just went into that pizza store and said ‘mate, I want a pizza with a lot of garlic on it so which one do you recommend?’

“He just went ‘garlic sizzler’ and I said ‘yep, I’ll take it!’ I didn’t even know what was on it, but I tell you what, that was delicious.”

It was a purposely subdued celebration as Van den Bergh pressed pause on the party until he could be around close friends and family, with a glass of wine and a meal out with his girlfriend high on the agenda.

The 26-year-old admitted the win, which made him the first debutant champion since Larry Butler in 1994, is still yet to sink in. Although if that doesn’t change, it means he was “just ready to be a winner”.

A winner he is, having been the undisputed standout player throughout the week in focus, performance and composure.

“The belief in winning the event came along the way,” he said. “I have been busy with myself because I had to play against Nathan [Aspinall] and I’ve never managed to win against Nathan before so after losing four times in a row to win like that against him on a stage like that on a tournament like that which was my debut, that was already a confidence boost for myself.

“Then the next round I had to play against Joe Cullen which was the same situation. We’d played a few times, I got smashed by him a lot and then I played on the stage and managed to win that game even though I was shaking a lot, that was incredible.

“From that moment on I had to play against players I believed I could beat because I’ve done it before.”

Van den Bergh went on to beat Adrian Lewis and Glen Durrant before seeing off Anderson in the final to add a maiden senior televised major to his resume alongside two World Youth Championship crowns.

Anderson had been visibly frustrated with his own efforts in the final, something Van den Bergh refused to let sway his own concentration.

“I was just busy with myself in thinking that ‘he’s going to step up soon’, I was expecting every throw to be a 180 because I know how good he is, I know what kind of quality he possesses,” he added.

“Besides that I just kept believing in my focus, I said to myself so many times ‘if he hits a 180, the only thing I need to do is answer it with a straight ton’ and that just kept me going, that kept my pressure on a low level because if you play your own basic game, 15 in the holding throw and 12 to break, you can beat everybody.

“I don’t know what I did to play and perform the way I did, but I reckon that it’s got to be all the time off in reflecting about how my life was going, what I’ve been achieving, how far I’ve come, what my goals are, what I want to achieve.

“My first goal to be honest was just qualifying for the World Matchplay. Who knew that I would be winning it as a debutante? Like wow.”

Van den Bergh, who sits at a career-high of 12 on the Order of Merit, is now looking to use his Matchplay success as a catalyst for improved form on the Pro Tour.

Despite his performances in Milton Keynes, he also believes there is still room for improvement to his game.

“I actually already said that to myself,” he said. “I’ve shown now I can win a prestigious tournament like this just with all the other top 31 players that are the best of the best.

“I said to myself ‘now it’s time to step up and start getting yourself a few wins on the pro tour’.

“I know I’ve played very strong and more consistent but I still believe I have a stronger level than I performed at. I still see a lot of chances that I gave away in my games, a lot of things I need to work on to get closer to perfection maybe.

“I do see myself as a stronger player, I can average over 100 easily and especially long and I haven’t done that in either of the games I’ve played.”

Travel restrictions as a result of the coronavirus pandemic meant Van den Bergh had been living on Peter Wright’s farm throughout the lockdown period.

That experience entailed some welcome practice against the world champion, collecting eggs from the chickens, archery in the garden and evidently some pranks at his own expense.

“He is a lot of fun to be around, he is funny,” said Van den Bergh. “The man even scared me at some points, he was cleaning out his garage and he found a big fluffy spider from Halloween and where I was staying in his house, that was behind like a secret book shelf that you need to walk through and then you’re in the room.

“What he did is, he put that spider right there on the floor, that’s the first thing you will see as you go through the door. I don’t know if I’m able to say, but I s*** myself. I was like ‘what are you doing?!’

“Even though that thing wasn’t real I couldn’t touch it. I am scared of spiders. Don’t ask me why, I just am.

“Afterwards, I found out from his missus that actually he is scared of spiders too so I got him back. As soon as they walk up and open the door, I thought if you walk in and open the door you turn that way so I put the spider right there behind the door, so at the moment he closed the door he would be scared as well and it worked.”

While circumstances were not ideal, the experience came as a timely taste of an extensive period in the UK as Van den Bergh plans to move over to the country.

Given the hectic nature of the darting calendar, he is hopeful of it helping him in the long run.

“It’s all about being more professional,” he explained. “It’s all about trying things to improve my game which means if I have to fly a whole lot less than might even have a positive effect on myself as well.

“Every year we have like 50-70 tournaments to play and every time I was flying, maybe the World Championship was the one I was driving to and a few European tours.

“That gets into your system so it’s probably going to be a whole lot easier for me and I’m so happy that my girlfriend wants to follow me in that.”

The celebrations may still be ongoing, but Van den Bergh is already turning his attention back towards life at the oche in view of building on his Matchplay landmark. For him, this is just the start.

“My mind right now is already on the World Championship, and tomorrow, no joke, I will starting practicing again,” he admitted.

“Obviously I will be building it up slowly. I don’t want to jump straight into it, I want to enjoy this win, but I’m going to give myself a little week to loosen up and then the full focus will be back on again. I’m excited.”

Darts is back on Sky Sports this month, as the Premier League returns with six consecutive nights of action getting underway on Tuesday, August 25.