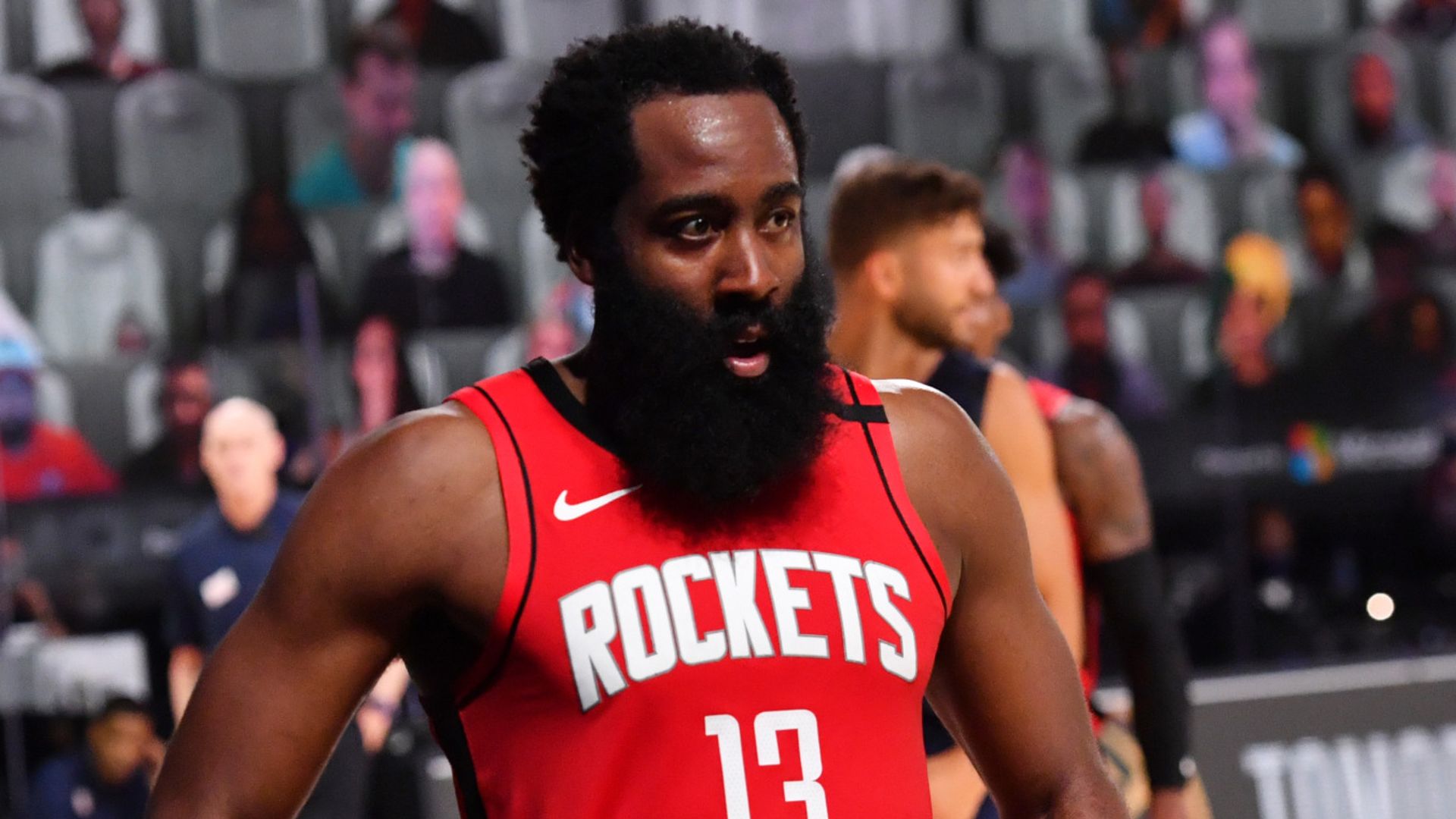 The Houston Rockets and the Portland Trail Blazers earned thrilling overtime wins in their respective restart openers on Friday night.

James Harden scored 49 points and Russell Westbrook added 31 points and 11 rebounds as the Houston Rockets erased a 14-point deficit and rallied for a 153-149 overtime win over the Dallas Mavericks on Friday.

The Rockets (41-24) claimed the season series with Dallas (40-28) two games to one by finally mustering some defensive might down the stretch of the fourth quarter.

Trailing 139-137, Houston got a tip-in of a Harden missed free throw from Robert Covington with 3.3 seconds left to force overtime.

Covington, following an 0-for-8 start from behind the arc, added a three-pointer with 1:22 left in overtime to extend the Houston lead to 150-146.

By then, the Mavericks, who led 131-120 with 7:09 left in regulation, were out of gas, and when Luka Doncic fouled out via an offensive foul with 28.3 seconds left, the Rockets were headed for a win.

Doncic recorded his league-leading 15th triple-double with 28 points, 13 rebounds and 10 assists while Kristaps Porzingis paced the Mavericks with 39 points and 16 rebounds. Trey Burke added 31 points on 8-of-10 three-point shooting off the bench while Tim Hardaway Jr scored 24 points for Dallas.

CJ McCollum scored 33 points and Damian Lillard added 29 as the Portland Trail Blazers overwhelmed the Memphis Grizzlies in overtime to win 140-135 in the first seeding game for both teams.

Portland (30-37) built a first-half lead then surged ahead 75-62 in the third quarter before a 22-6 Memphis (32-34) run pushed the Grizzlies ahead. The Trail Blazers played from behind for much of the fourth quarter, but remained within striking distance.

Two three-pointers from Carmelo Anthony in the final 1:23 gave Portland the lead, including a 124-122 advantage with 37.5 remaining. Brandon Clarke, who scored 21 points for Memphis off the bench, responded with a game-tying basket.

Ja Morant led a breakaway off of a defensive rebound in the closing seconds, but got tangled with a defender and was unable to get off a shot.

Morant, the Grizzlies’ leading scorer on the season at just under 18 points per game, finished with 22 points. He had only two points on 1-of-2 shooting at half-time, but came to life to lead the third-quarter run.

Morant scored seven consecutive points over one stretch, capped with a spectacular dunk off a lob from Clarke. Morant returned the favour to Clarke in the fourth quarter with one of his 11 assists, but Clarke was hit with a technical foul on the ensuing celebration.

The technical marked a critical turning point. Memphis went ahead by seven points, but Portland began a 12-4 run over the next 2:21. Neither team led by more than two points for the remainder of regulation.

That changed in overtime. McCollum knocked down a three-pointer, followed immediately by another from Gary Trent Jr for three of his 17 points off the bench.

Giannis Antetokounmpo had 36 points and 15 rebounds to lift the Milwaukee Bucks to a 119-112 victory over the Boston Celtics.

Khris Middleton had 18 points and Brook Lopez added 14 points and six blocks for the Bucks (54-12), who bolted out to a 17-2 lead before requiring a late push to seal the win.

Marcus Smart scored 23 points off the bench and Jaylen Brown added 22 for the Celtics (43-22), who saw their lead over fourth-place Miami (41-24) shrink to two games in the Eastern Conference.

Boston’s Jayson Tatum, who entered the contest averaging a team-leading 23.6 points per game, finished with five points on 2-of-18 shooting from the floor.

Antetokounmpo sank a short jumper to give Milwaukee a 107-105 lead before the officials rescinded what appeared to be his sixth foul of the evening while attempting to work through a screen.

After Daniel Theis tied the game up for Boston, Antetokounmpo converted a three-point play and Middleton added a three-pointer to push the Bucks’ lead to 113-107 with 1:03 left.

Antetokounmpo answered Brown’s three-point play with one of his own to effectively put the game away.

Boston’s Kemba Walker scored 16 points while logging just 19 minutes of playing time. The All-Star guard is nursing a sore left knee that has lingered since the start of the calendar year.

Prior to the game, players and staff from both teams knelt in solidarity while donning Black Lives Matter shirts during the national anthem.

DeMar DeRozan scored 27 points – all but two in the second half – and added 10 assists as the San Antonio Spurs finished with a flurry to beat the Sacramento Kings 129-120 in the Visa Athletic Center.

The win, along with Memphis’ overtime loss to Portland earlier in the day in another key Western Conference seeding game, moved the Spurs (28-36) to within three games of the Grizzlies for eighth place in the conference with seven games remaining until the playoffs.

The game was tied at 112 with 3:59 to play before DeRozan took charge, scoring eight of the Spurs’ next 13 points.

Derrick White added 26 points for San Antonio, with Rudy Gay scoring 19 off the bench, Lonnie Waller IV hitting for 16 and Dejounte Murray contributing 11 for the Spurs.

The Kings’ De’Aaron Fox led all scorers with 39 points, while Bogdan Bogdanovic hit for 24, Nemanja Bjelica added 12, and Harrison Barnes and Richaun Holmes contributed 10 points each for Sacramento (28-37).

After trailing 65-64 at half-time, the Spurs took the lead in the third and were up 96-92 heading into the fourth quarter, with DeRozan scoring eight points in the period. Sacramento did not score in the final 2:50 of the fourth quarter.

Cameron Johnson and Devin Booker combined for 18 first-quarter points, helping the Phoenix Suns build a big lead en route to a 125-112 victory over the Washington Wizards.

Booker finished with a game-high 27 points and Deandre Ayton registered a 24-point, 12-rebound double-double for the Suns (27-39), who entered the resumption of play with the worst record among the 13 Western Conference teams still alive.

Johnson, a rookie who had averaged just 8.1 points before the break, responded to his second start of the season with a three-pointer and three-point play among 10 first-quarter points as the Suns ran up 38 points in the period to take a seven-point lead.

Phoenix ran off 16 straight points to grab command for good 4:16 before the half. Mikal Bridges and Cameron Payne buried three-pointers in the run, which put the Suns up 60-46. Washington got no closer than seven in the second half.

The Orlando Magic turned a close game into a rout as they comfortably defeated the Brooklyn Nets 128-118 in the first game of the NBA’s restart for both teams.

Evan Fournier had 24 points while Aaron Gordon posted a double-double (10 points, 11 rebounds) for the Magic (31-35), who moved past the Nets (30-35) into seventh place in the Eastern Conference.

Starters Nikola Vucevic (22 points) and DJ Augustin (11 points) got into double digits for the Magic, as did reserves Jonathan Isaac (16 points) and Khem Birch (12 points).

Timothe Luwawu-Cabarrot scored 24 points off the bench for the Nets, who entered Friday six games ahead of the ninth-place Washington Wizards. The Wizards are scheduled to play the Nets on Sunday.