Nathan Bennett is excited about getting the opportunity to showcase his skills to the masses.

The Liverpudlian has won all but one of his fights as a pro to date and will meet a former star amateur on Saturday night.

Bennett (9-1, 2 KOs) has two wins on the bounce since losing his unbeaten record to Ben Fields last October.

And this weekend, as part of week one of Matchroom Boxing’s Fight Camp series at the company’s Brentwood headquarters, the 27-year-old takes on Dalton Smith, the man from Sheffield who won medals at the Junior European Championships and youth Commonwealth Games during a glittering amateur stint with Team GB, over eight rounds.

“These are the fights that get me out of bed,” Bennett told BoxingScene in a fight week interview after it was revealed that he tested negative for COVID-19.

“This is a fight that’s, of course, my toughest test as a professional, but I’ve got to look at the positives rather than the fact that I’m in against a top fighter.” 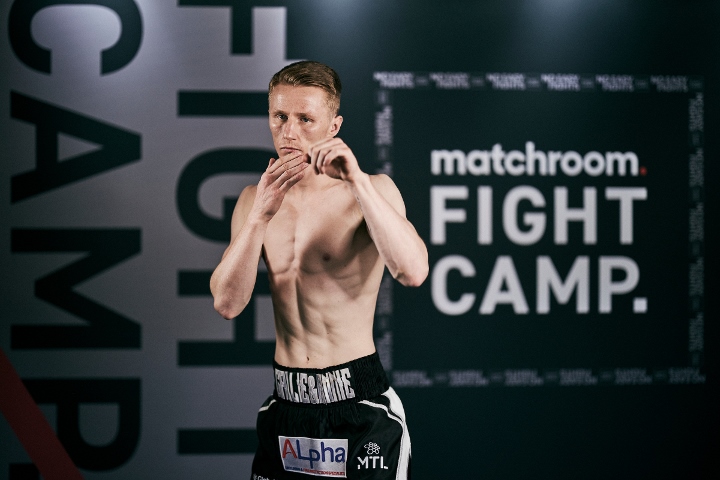 Bennett is managed by Steve Wood, the man behind IBF featherweight king Josh Warrington, and has boxed on small hall cards to date.

But he believes that he will be able to show what he can do on the big stage under the tutelage of former pro, Steve Harkin, and the other coaches at his amateur gym Kirkdale ABC.

“It’s a once in a lifetime opportunity and it will be watched all around the world,” he continued ahead of his outing which will be screened exclusively live on Sky Sports and DAZN. “This is my opportunity. This was meant to be for me. There are no expectations of me but I’ve got expectations of myself.

“Training has been superb, I’m in great shape and weight won’t be an issue for me, so my plan is to win and move on to bigger and better things.”

Smith has a flawless record since turning over to the paid code back in March 2019. He is unbeaten in five, four finishes coming inside the distance, but Bennett is keen to impress promoter Eddie Hearn, with the hope being that he will be added to the Matchroom roster on the back of a good display.

“I wouldn’t have been boxing until next year if it wasn’t for this fight, would I? Steve Wood phoned me and asked me what I thought about him and I told him straight away to make the fight.

“Dalton’s good, of course, he is, but we’ll find out just how good he is when he’s in against me. One thing’s for sure, I’m concentrating on what I can do and how I can win, rather than what his strengths are.

“This is about me moving to the next level in my career and on Saturday I’ll prove that I’m more than good enough to be able to do that.”

James Tennyson (26-3, 22 KOs), from Belfast, takes on Cardiff’s Gavin Gwynne (12-1, 2 KOs) for the vacant British lightweight title, while there is an electric featherweight battle between long-time domestic rivals Jordan Gill and Reece Bellotti and heavyweight Fabio Wardley faces former Team GB amateur Simon Vallily, who is stepping up from cruiserweight, for the vacant English belt, previously held by Daniel Dubois, in the sport’s premier division.