Joe George emphatically ensured that the judges had no say in his rematch with Marcos Escudero.

Well on his way to losing their 10-round light heavyweight fight Saturday night, George drilled Escudero with a left uppercut that abruptly ended it early in the ninth round. George’s vicious shot sent Escudero flat on his back 20 seconds into the ninth round.

A devastated Escudero couldn’t come close to getting up by the time referee Dan Schavoine counted to 10 at Mohegan Sun Arena in Uncasville, Connecticut.

Houston’s George remained unbeaten, improved to 11-0 and recorded his seventh knockout. Argentina’s Escudero (10-2, 9 KOs) lost for the first time by knockout eight months after dropping a controversial 10-round split decision to George.

Judges Don Trella (79-73) and SteveWeisfeld (77-75) had Escudero ahead entering the ninth round. Judge Tom Carusone (79-73) had George ahead at the time of the stoppage.

George’s win was the first boxing match Showtime televised since March 13, which was the last boxing show in the United States for nearly three months due to the COVID-19 pandemic. 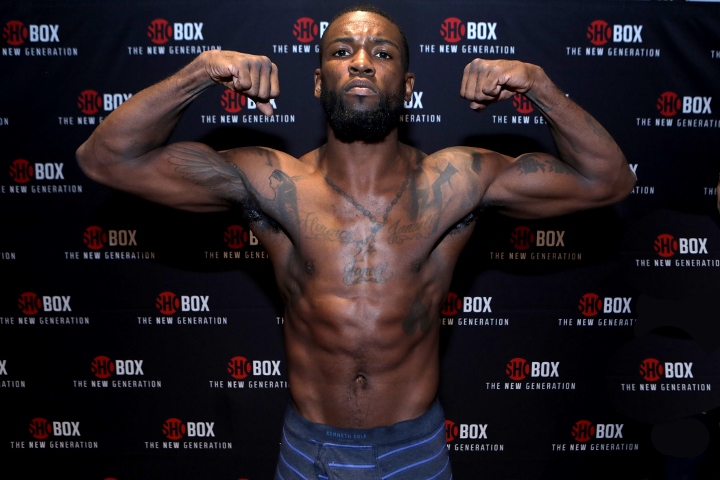 George finally let his hands go at the start of the eighth round, yet he quickly reverted to backing up and allowing Escudero to pressure him. It was still a better round for George, who landed more punches in it than he did during many of the prior rounds.

George’s right hand to the top of Escudero’s head seemed to cause a knockdown with 15 seconds to go in the eighth round.

Escudero went to the canvas 35 seconds into the seventh round, but it was the result of an awkward entanglement, not a punch.

Escudero’s right hand backed George into the ropes yet again with about 40 seconds left in the sixth round, which mirrored many of the previous rounds.

George covered up early in the fifth round as Escudero attacked him and backed him into the ropes. He blocked a lot of Escudero’s punches in those three minutes, but he didn’t throw a lot of punches.

Escudero caught George with a left uppercut just after the midway mark of the fourth round, when George was backed against the ropes. George’s right uppercut landed as Escudero leaned forward late in the fourth round.

Escudero kept George on his back foot throughout the third round. A right hand by Escudero backed George into the ropes with just over 40 seconds left in that round.

Escudero caught George with a solid left to the body 45 seconds into the second round. Escudero backed George into the ropes with just under a minute remaining in the second round and tried to hammer away at his body.

Escudero was the aggressor again throughout the second round, when George blocked or slipped several of his hardest shots.

George nailed Escudero with an overhand right to his jaw just 13 seconds into their fight. George and Escudero each landed left hooks with just under 30 seconds to go in the opening round, but George’s shot seemed to be more effective.

George won their first fight on the scorecards of judges Bob LaFratte (97-93) and Carlos Sucre (97-94). Judge Gloria Martinez credited Escudero with a 96-94 victory in that 10-rounder November 15 at WinnaVegas Casino Resort in Sloan, Iowa.

George buzzed Escudero with a right hand in the ninth round of that “ShoBox: The New Generation” main event. Escudero was busier, however, and landed more punches overall.