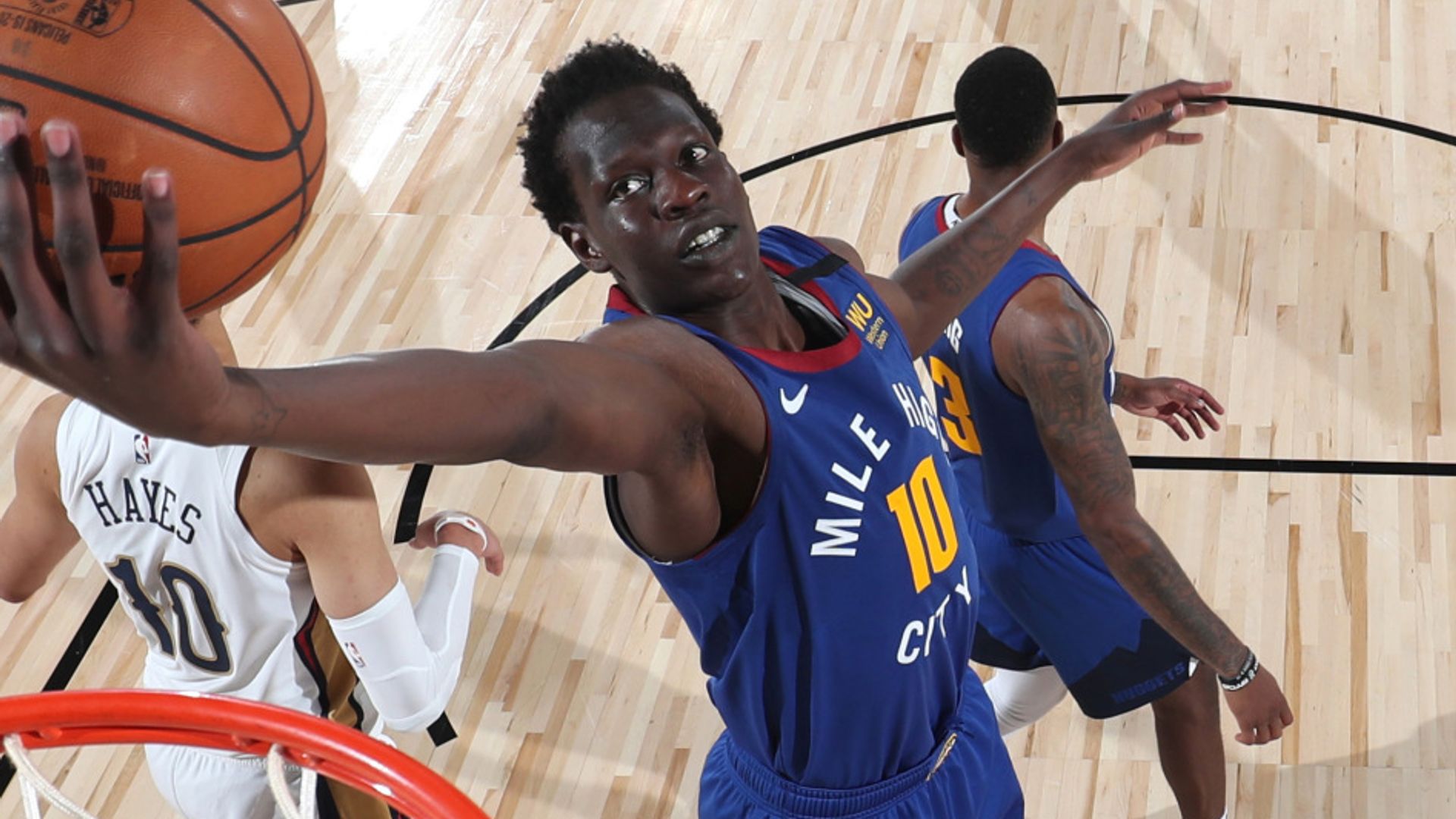 After making an impact in Denver’s three scrimmage games, has 7ft 2in rookie Bol Bol carved out a role in the Nuggets rotation ahead of their opening restart game?

Bol, son of the late 7ft 7in Sudanese NBA star Manute Bol, was selected in by the Nuggets in the second round of the 2019 Draft after a foot injury curtailed his college career at the Univeristy of Oregon.

Bol, who did not play a minute for Denver before the NBA suspended games on March 11, finally made his Nuggets debut in odd circumstances inside the Disney bubble.

With just eight available players for their opening restart scrimmage game with the Washington Wizards, head coach Mike Malone started Bol at small forward alongside Nikola Jokic, Mason Plumlee, Jerami Grant and Paul Millsap in what was one of the tallest starting line-ups in NBA history.

Bol starred on debut, racking up 16 points, 10 rebounds and eight blocks and helping the Nuggets to an 89-82 win. He followed that up with double-figure scoring in Denver’s two subsequent scrimmages.

On the latest edition of Heatcheck, Mo Mooncey, Ovie Soko and three-time NBA champion BJ Armstrong discussed if Bol could make a further impact in the seeding games and the playoffs.

“I am intrigued by what is happening with Bol Bol and the Nuggets,” said Mooncey. Denver had to roll out a super-tall line-up with Nikola Jokic at point guard and Bol at the three. It worked really well and Bol followed it up with some strong play.

“What stood out most to me was how well he played with Jokic. One thing Denver really needed was a shot-blocking presence because Jokic isn’t the greatest defender in the world. Usually the trouble with that comes on the offensive end where you’d have two big bodies clogging up the paint.

“The beauty of Bol is that he has a fantastic outside shot. He shot over 50 per cent from three-point range in college. He is also very quick for his size so he can get up there in transition and play as a cutter off the ball too. You are seeing the connection already forming between Bol and Jokic with almost half of Jokic’s assists coming directly from Bol. The future is very bright if Denver can continue to develop him.

“Will Bol help Denver cause a shock in the playoffs this year? I’m going to have to say it’s a cold take. Bol looks very impressive but these are pre-season scrimmages against opponents not playing their full-strength squads. The biggest thing is this: the blocks he has picked up have come when the Nuggets have played a zone defense which is tailored to him because he doesn’t have the lateral movement to pick guys up man-to-man.

“Will Denver be able to play a zone defense against some of the league’s top teams without getting picked apart? I’m not too sure on that one.”

Soko believes the size and length of Denver’s mammoth line-up of Jokic, Bol, Millsap, Plumlee and Grant could make for a viable zone defense “at points” in a regular season or playoff game.

“I believe Denver will ruffle some feathers in the playoffs,” he said. “In the zone we have seen them play, when you have guys who have so much length, cover so much ground and, in some senses, make up for Bol’s lack of laternal quickness, it could be interesting.

“This [super-tall] line-up is something no one has played against in the NBA. No one is used to facing it. As long as the guys play within themselves, it can be a very effective line-up that could maybe go to at certain points.”

Former Bulls guard Armstrong described Bol as “intriguing” but added the rapid-fire nature of the remainder of the NBA season could see coaches revert back to line-ups and systems they trust.

“When you look at the Denver Nuggets, the potential of Bol is one of the most impressive things you see,” he said. “As a shot-blocker and rim protector, he fills a gaping hole on the team and gives them a different look. That is potentially a tremendous asset for the coaching staff.

“However, experience has great value, especially in the playoffs. And we only have eight seeding games before the playoffs begin. I think all these coaches will revert back to the players they know and hold that pattern. Everyone will shorten their rotations.

“I like Bol and what he has bought to the Nuggets. I like the three performances I have seen and I am really intrigued by his versatility, both defensively and offensively. He has shown he can spread the floor and the game is not too fast for a man of his size.

“I look forward to how this plays out next year because Bol and Michael Porter Jr were high-risk, high-reward draft picks. The future looks promising in Denver.”