Marcus Bates believes something sinister occurred in his corner the night he lost to Ra’eese Aleem two years ago.

Bates claimed an unidentified cut man who worked his corner during that bout tampered with the water he was given between rounds. Aleem won their eight-round bout by unanimous decision in April 2018 at 2300 Arena in Philadelphia.

Bates also alleged that the aforementioned cut man, with whom he hadn’t previously worked, knows Aleem’s team and gave him contaminated water to give Aleem an edge in their bout. Aleem, 30, and Bates, 26, will fight again Saturday night in a 12-round junior featherweight fight Showtime will televise from Mohegan Sun Arena in Uncasville, Connecticut.

“Every time I came back to the corner and I had drunk my water, I just felt like it was taking away my energy, it was taking away everything,” Aleem explained during Showtime’s virtual press conference Thursday. “So, I came back to the corner – if y’all got the video of the fight when I fought him, I think it was about the sixth or the fifth round, when I was about to come out [of my corner] and they was trying to give me water, and I told ‘em, ‘No. I don’t want no more water. Don’t give me no more water. I don’t  want the water at all.’ So, that’s what it was. I mean, no excuses because, you know, I’m a boxer, I’m a fighter. We don’t make excuses when we lose because we don’t make excuses when we win. So, but yeah, I believe there was something going on with my water.” 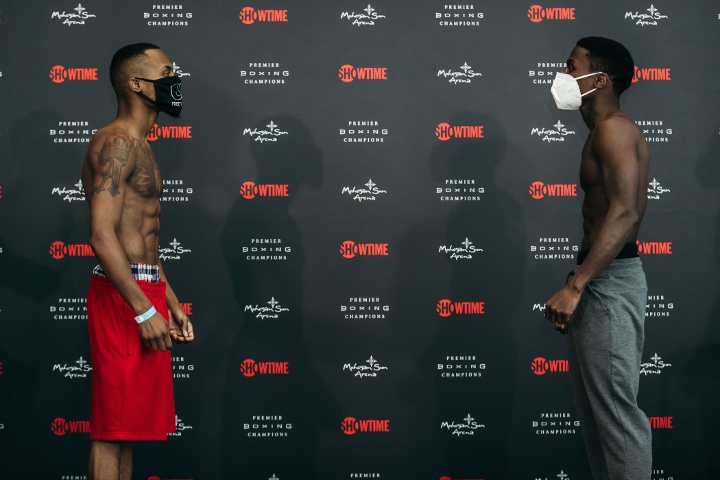 Bates (11-1-1, 8 KOs), of Washington, D.C., further suspected something was amiss after suffering what remains his lone loss as a professional.

Aleem condemned Bates’ accusation as “bullsh*t” and promised to knock him out in their rematch. Aleem (16-0, 10 KOs), of Muskegon, Michigan, was supposed to fight Tramaine Williams on Saturday night, but Williams was moved into Showtime’s main event against Angelo Leo because Stephen Fulton, Leo’s original opponent, tested positive Wednesday for COVID-19.

Leo (19-0, 9 KOs), of Albuquerque, New Mexico, and Williams (19-0, 6 KOs, 1 NC), of New Haven, Connecticut, will fight for the vacant WBO 122-pound crown Mexico’s Emanuel Navarrete gave up recently to move up to the 126-pound division. Aleem and Bates will compete in a WBA 122-pound elimination match, the first 12-rounder for either fighter.

Whereas Aleem was the one that took their first fight on a few days’ notice, Bates learned just three days ago that he’d square off against Aleem again. He had been training, though, and was part of the COVID-19 testing program established by Premier Boxing Champions, TGB Promotions and Showtime to help keep potential replacements on standby in case fighters scheduled to box Saturday night tested positive.

Several weeks of preparation, even for a fight he wasn’t certain would happen, and his familiarity with Aleem have made Bates completely comfortable with his assignment Saturday night.

“I know what he coming with now,” Bates said. “I know how he gonna come out to fight and I’m prepared for everything now, you know? Over the few weeks of training, I’ve been preparing myself for any style of fighter. Cuz our last fight, he was like a last-minute call, I guess. I was preparing for somebody else, but then he had stepped in a day or two days before.

“So, this time I’m prepared for him, and I’m ready to fight. … This is a perfect opportunity for me. If I win, I might fight for a world title. That’s every boxer’s dream, to get a world title and get a belt. So, yeah, I’m very excited to be here, fighting on TV and stuff.”