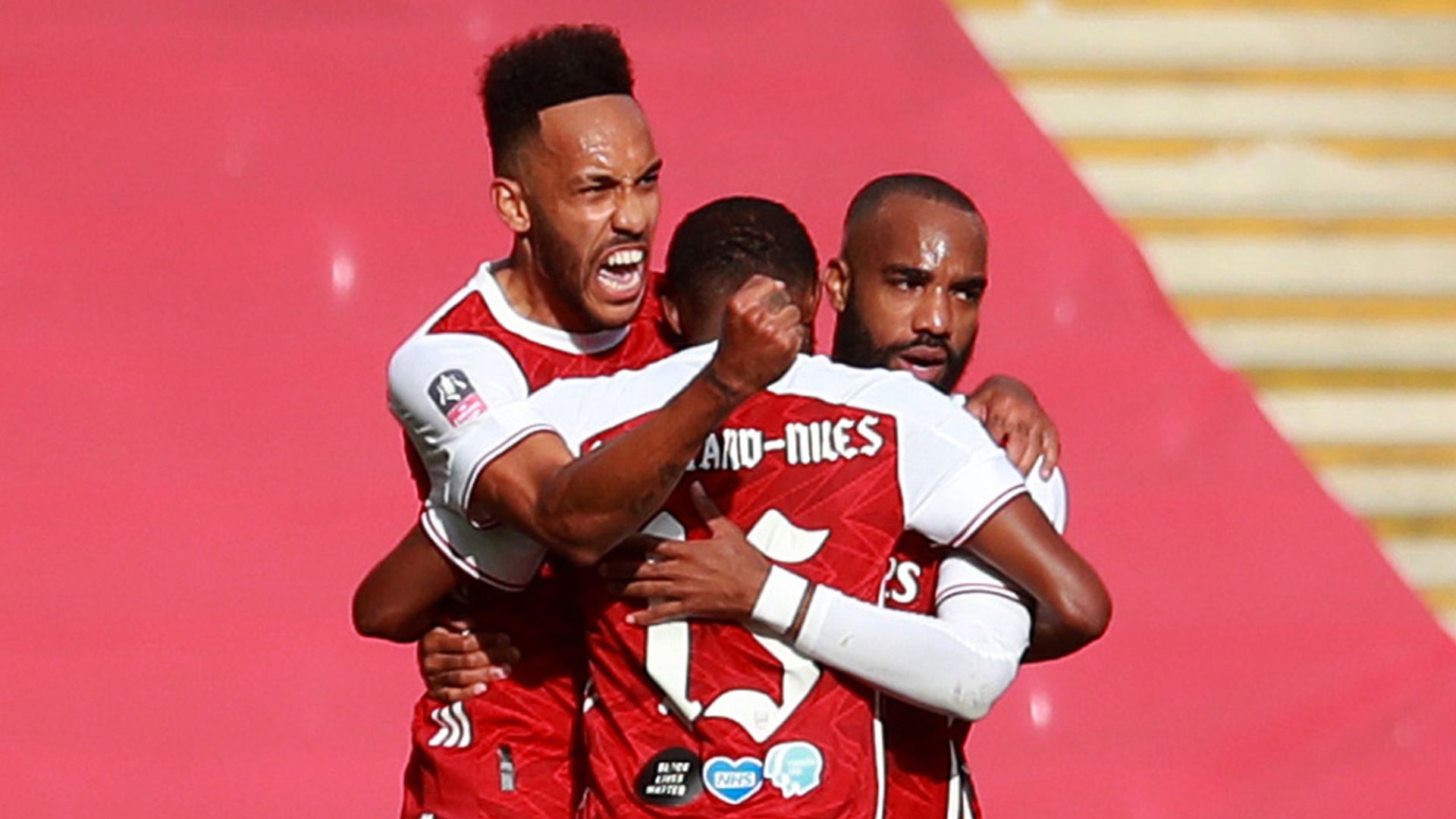 By Nick Wright and Peter Smith

Arsenal won the FA Cup thanks to a 2-1 win over Chelsea, but who impressed and who didn’t at Wembley?

Christian Pulisic gave Chelsea an early lead, latching onto Olivier Giroud’s lay-off and firing home, but Pierre-Emerick Aubameyang levelled from the penalty spot before scoring a superb winner in the second half.

The win ensures Arsenal finish a difficult season on a trophy-winning high, clinching a place in Europe for next season, and leaves Chelsea to reflect on a missed opportunity. Here’s how we rated the players.

Another assured display from a goalkeeper who is making a strong case for Arsenal’s No 1 shirt. Had little chance with Pulisic’s opener but made a string of sharp saves after that and commanded his area well throughout.

Targeted by Chelsea and endured some difficult moments in the first half, but recovered well after that and made some important defensive interventions.

Arsenal supporters wondered which version of Luiz they would see at Wembley. Thankfully for them, this was the best one. Provided poise and leadership at the back and avoided any notable errors before he was forced off with an injury late on.

Couldn’t get close enough to Pulisic for Chelsea’s opener but that was a rare lapse in an otherwise solid performance. His long passes over the top caused the Blues problems, particularly during the first half.

Has struggled at times since his return from injury but this performance was further evidence that he is recapturing his best form. Excellent in the build-up to the second goal, his driving run creating the space Aubameyang needed to do the rest.

Another excellent performance from the Spaniard at the base of Arsenal’s midfield. Showed his class on the ball throughout and impressed defensively too, snapping into tackles and making a crucial block from Reece James in the second half.

Fortunate that Chelsea did not capitalise when he lost possession in Arsenal’s half in the opening stages, but improved as the game wore on. Worked hard defensively and made an important block from Ross Barkley in stoppage time.

Followed up his impressive display in the semi-final against City with another eye-catching performance at left wing-back. His runs in behind were a constant source of danger in the first half.

Has struggled at times during his first season in England but played with real swagger at Wembley, drawing fouls from blue-shirted defenders and linking up smartly with Aubameyang, most notably for the winning goal.

Arsenal’s match-winner once again. He missed one early chance, heading wide from a Maitland-Niles cross, but was clinical thereafter. Won and scored the penalty to bring Arsenal level, then showed wonderful skill and composure for the second goal. A captain’s performance.

Didn’t have much joy in front of goal, firing wide from a free kick in the first half and allowing the ball the run under his foot when well placed to score late on, but worked tirelessly for the team before he was replaced by Eddie Nketiah.

Provided some fresh legs after replacing Lacazette during the closing stages.

A rare appearance for the Greek international. Played the final few minutes after replacing Luiz.

Brought on for Tierney to kill a few seconds right at the death.

Went the wrong way for Aubameyang’s penalty and got caught under a cross but had little else to do in the first half. Beaten by a smart finish from Aubameyang after the break and unable to come up with a defining stop.

Pushed forward whenever he had the opportunity but missed his target with several key crosses and fired well over when presented with a long-range opportunity in the second half.

Struggled with the pace and trickery of Maitland-Niles and then got caught the wrong side of Aubameyang before giving away the penalty. Forced off with a hamstring injury on the half-hour. Day to forget.

Kept Lacazette quiet for long periods but was wrong-footed and allowed Aubameyang to go past him far too easily for Arsenal’s second.

His attempt to stop a charging Bellerin in the build-up to the decisive second goal was so tame and opened up the opportunity for the Arsenal man.

Failed to have the attacking impact from the left he was in the team for and further evidence of why Lampard is looking to refresh this area of the pitch.

Sat in his favoured quarter-back style role and kept Chelsea ticking over. Put his foot in when required. But never really sparkled like he can.

Criminally sent off – rightly booked for a mis-timed challenge on Xhaka in the first half but was given a second yellow for allowing the Swiss to stand on his foot in the second. Had been key to Chelsea’s tempo. That dropped off midway through the first half and at times in the second before his wrongful dismissal.

Bright throughout after setting the tone early on by forcing a good save from Martinez with a long-range shot. Involved in the opener – and all of Chelsea’s best play. Booked for a soft foul on Ceballos but Lampard will be delighted with his efforts from the left side.

Laid off for Pulisic to score the opener when another fine day in the FA Cup seemed on the cards. But ultimately had a tough battle against an inspired David Luiz before being subbed off with around 15 minutes to go. His first Wembley loss since 2012.

Chelsea’s best player on the day delivered another reminder about his extraordinary potential with a clever finish for the opener. Could have had a second moments later and then went close at the start of the second half – but agonisingly injured his hamstring in the process. Could it have been different if he’d stayed on?

On after just 35 minutes for Azpilicueta but slotted in well, blocking a dangerous Aubameyang chance. Unfortunate to see the ball break to Pepe when he collided with Bellerin and had to watch Aubameyang score their second.

Replaced the injured Pulisic at the start of the second half and was lively as ever in what looks set to be his final appearance for Chelsea in England. But it all ended in agony – with defeat and what appeared to be a shoulder injury.

Was sent on to come up with something special but was never able to get into a position to influence the outcome.

Only real contribution was to be booked for catching Nketiah.

Like the rest of the triple change – Abraham and Barkley – failed to have the desired impact Lampard was after.