Their fight Saturday night is as much a grudge match for Ra’eese Aleem as it is a chance at redemption for Marcus Bates.

Aleem is offended by Bates’ allegation that tainted corner water was primarily responsible for his unanimous-decision defeat to Aleem two years ago. Bates lost their eight-round fight to Aleem by big margins on all three scorecards, but Aleem promised that their rematch won’t even go the distance Saturday night at Mohegan Sun Arena in Uncasville, Connecticut.

“The first time I fought him head to head, I beat him fair and square, and he had the audacity to say something was up with his water or some bullsh-t like that,” Aleem said during Showtime’s virtual press conference Thursday. “Real fighters don’t make up excuses, and that’s exactly what he has done. He’s made excuses. He called me out and told people I was scared to fight him. Well, he gets his chance now. It’s gonna be more than what he bargained for.”

Bates was on standby until Wednesday, training and undergoing COVID-19 testing in case one of the four 122-pounders scheduled to fight Saturday night tested positive for the virus. When Stephen Fulton failed a COVID-19 test Wednesday, Tramaine Williams, Aleem’s original opponent, was moved into the main event – a 12-round fight against Angelo Leo for the vacant WBO junior featherweight title.

Bates, of Washington, D.C., gladly replaced Williams in a 12-round WBA super bantamweight elimination match. The 26-year-old Bates had never been scheduled for more than eight rounds before taking this fight on three days’ notice.

“I believe it’s a big advantage for me because I am a 12-round fighter,” said Aleem, who hadn’t been scheduled for more than eight rounds before this fight, either. “Every fighter should strive for that. That’s what I trained for. I’m ready to go 12 hard, active rounds if need be.” 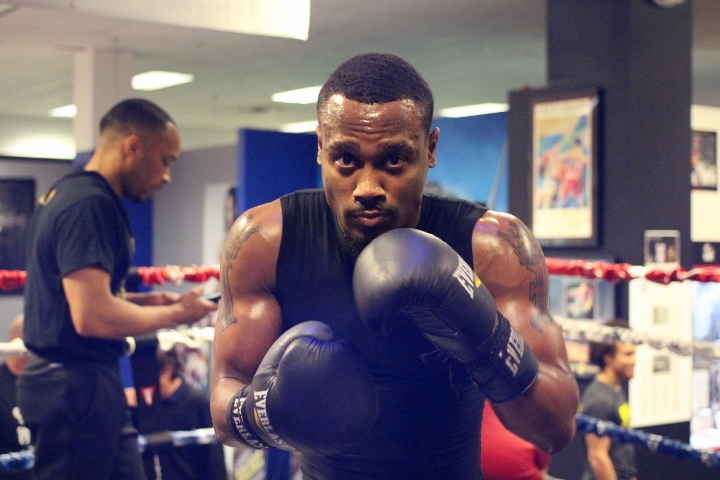 Aleem (16-0, 10 KOs), of Muskegon, Michigan, doesn’t think Bates is at a disadvantage due to taking their fight on such short notice, though. Bates (11-1-1, 8 KOs) had been training and there’s obviously familiarity among them.

“He is a top fighter and he is still a threat,” Aleem said. “So, given the circumstance of this and that doesn’t really matter. Because at the end of the day, he can fight. So, you know, I do have to be cautious of that. But given the fight at a moment’s notice and everything, I don’t believe that gives me an advantage. I just have to go in there and handle business.”

The 30-year-old Aleem hopes his fight with Williams is rescheduled at some point, especially if the skilled southpaw wins the WBO 122-pound title in the main event Saturday night. First, however, he intends to teach Bates a lesson by beating him even easier than he did in April 2018 at 2300 Arena in Philadelphia.

“That fight, it was my first fight in 2½ years,” Aleem said. “I was in Las Vegas, Nevada, training myself. So, it was just kinda new for me. You know, I was just kinda getting my feet wet. But since then, I’ve been active. I have a great trainer, Bobby McRoy. I’ve been in the gym. It’s different. I’ve grown a staggering amount from that fight until now. I don’t believe he’s gotten any better since then. Maybe a little bit, but I became a world-class fighter since then.”

That improvement made Aleem confident he could’ve defeated Williams as well. His focus now has shifted toward beating Bates inside the distance in the second of three fights Showtime will televise as part of a broadcast that’ll start at 9 p.m. ET/6 p.m. PT.

“It’s the same statement I was trying to make with Williams,” Aleem said. “And that is still a future opponent that I wanna fight. But, you know, I wanna show up and show out. You know, I’m not only looking to win, I’m looking to dominate. And make no mistake, I’m definitely looking to knock him out.”

Canelo: I Knew Saunders Was Not Coming Out, I Broke His Cheek