Former four division world champion Roy Jones Jr. believes that he still has the legs and the boxing ability to hang with a much bigger man.

He’s get the chance to prove his claims on September 12, when he faces former undisputed heavyweight champion Mike Tyson in Carson, California.

Their eight round exhibition will headline a pay-per-view event.

“It’s hard to say. Boxing is a strange sport. A lot of times people say the legs are the first thing to go, and my legs were really a key part of my style, my skill level. They say power is the last thing to go, and his power was the key element of his skill set,” Jones Jr. told ESPN’s First Take. 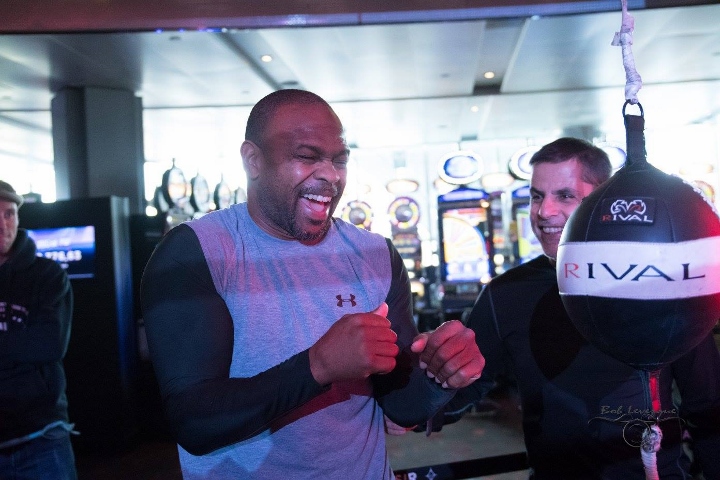 Jones admits that he plans to box and have some fun – but he expects Tyson to come out looking for blood and looking for a knockout.

“For me, I know how to have fun in the ring and try to make it the best that I can make it,” Jones said. “But at the same time, Mike knows one way. It’s like playing with a pit bull pup. … He’ll play, but he’ll get lost because all he knows is [to] … go at it. So that’s all Mike knows — go at it. So I’ve got to be prepared for whatever Mike comes out with.

“Now, I want to box, have a good time and give people a good show, as well. But Mike ain’t ordinary. He’s not that person that can go out and do that. All he knows is to take your head off.”

“Mike is still just as dangerous as ever. The only thing about it is, you’ve been out of this sport for so long, it’ll be hard for him to go a full 12-round bout and sustain this. Yet he’s still good, he has his speed, he still has his power, he’s still highly explosive, so he’s still a dangerous guy. It’s going to be dangerous for all eight rounds. You’ve got to be ready to protect yourself because that’s Mike Tyson.”

Berchelt: Fans Are Already Desperate To See Me and Valdez Fight