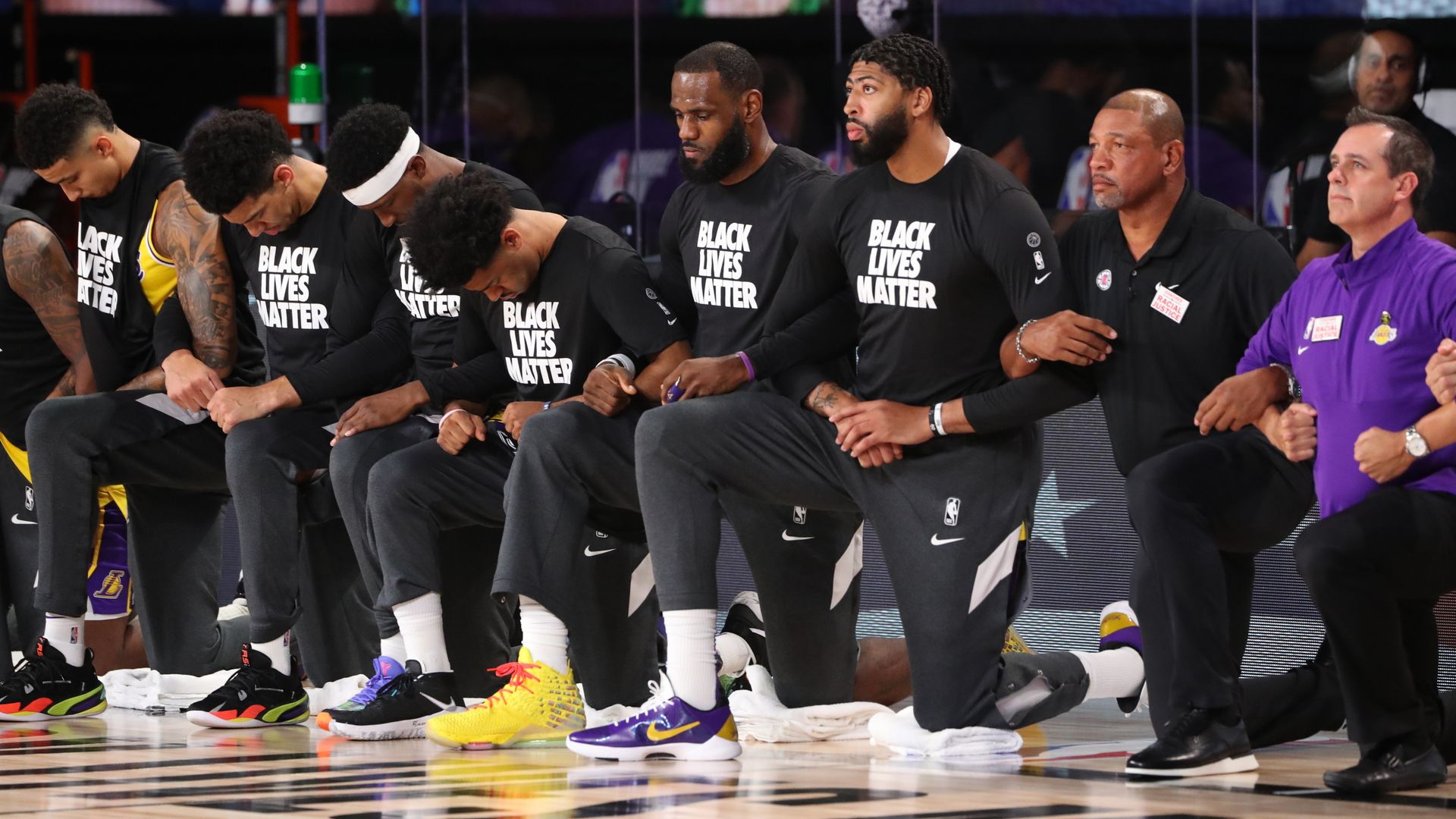 Every person present at the opening game of the NBA’s restarted season knelt in support of the Black Lives Matter movement during the national anthem before the New Orleans Pelicans and Utah Jazz played on Thursday night.

All players, coaches and staff members of the Pelicans and Jazz, along with all officials, wore shirts reading “BLACK LIVES MATTER”, which was also printed on the court. Many locked arms with those next to them, while some players raised fists in the air.

The players and coaches on the Los Angeles Lakers and Los Angeles Clippers also knelt prior to Thursday night’s later game at ESPN Wide World of Sports campus near Orlando.

“The game of basketball has always been bigger than just the ball and the rim and 10 guys on the floor,” Lakers star LeBron James said postgame on TNT.

“It’s an opportunity to use this platform to be able to spread a lot of positive, a lot of love, throughout the whole world.

“We understand what is going on in society right now, and we’re using this NBA platform as the players, as the coaches, as organizations to continue to stand strong on that. This is a good start. It’s great to have the NBA back. I hope our fans are proud of us tonight.”

Asked if the NBA is making a difference, James said: “There’s been progress. But in the past when we’ve seen progress, we’ve let our foot of the gas a little bit. We can’t do that. We want to continue to keep our foot on the gas, continue to push forward, continue to spread love throughout America.

“We are dealing with a lot of racism, a lot of social injustice, a lot of police brutality, not only in my neighbourhoods, not only with Black people but with people of colour, and it’s something that we want to continue to have people’s ears open to. We have ears now, but we cannot stop with our foot on the gas as we’ve been doing over the last few months.”

The anthem before the Jazz-Pelicans game was performed virtually by Louisiana native Jon Batiste, who played a rendition with a mix of piano and guitar.

Before the anthem, the TNT broadcast aired an introductory segment narrated by rapper Meek Mill, promoting social justice initiatives and the BLM movement, followed by a segment with several NBA players speaking on the subject.

Players displayed a variety of social justice messages on the backs of their jerseys, including “Black Lives Matter”, “Say Their Names” and “I Can’t Breathe”.

The game was the first in more than four months since the regular season was suspended in March due to the coronavirus pandemic.

Again at the Lakers-Clippers game, various players had social justice messages on the backs of their uniforms. James passed on the option and went with his last name.

The Compton Kidz Club sang the national anthem through a video feed before the Clippers faced the Lakers.

The Pelicans issued a statement that read: “The New Orleans Pelicans stand by the ideals of freedom of speech and the right to peacefully protest. Collectively with the Utah Jazz, our organization joins the NBA in supporting our players and coaches. To promote meaningful change relative to social justice and racial equality, the New Orleans Pelicans have partnered with our players, staff and coaches to create a Social Justice Leadership Alliance committed to furthering the discussion, listening and taking action to make positive change in our community and our country.”

The Jazz wrote in a statement: “The Utah Jazz are committed to advancing social justice and stand in support of the players, coaches and staff as they exercise their First Amendment rights, and use their voices, their experiences, and their platforms to peacefully express themselves. We are a values-based organization and believe in the foundational principles of justice, equality, fairness, and economic empowerment. Our organization strives to be a unifying force in our communities, and we hope this time in our history can be a catalyst for positive change in a country we love.”