Caoimhin Agyarko looked a middleweight on the rise as he knocked down Jez Smith three times on the way to a ninth-round stoppage in a scheduled ten-rounder on the Queensberry Promotions show at the BT Studios in London.

Agyarko, 23, was once a decent amateur in his native Northern Ireland, but he has a compact style and picked his shots well. Smith, who was moving up from welterweight, was outgunned early on, but rallied well in the fourth and fifth rounds, finding Agyarko with several clubbing right hands.

The power started to take its toll on Smith in the seventh, as Agyarko landed a crunching right uppercut as Smith lay back on the ropes and then dropped him with a left hook to the body. 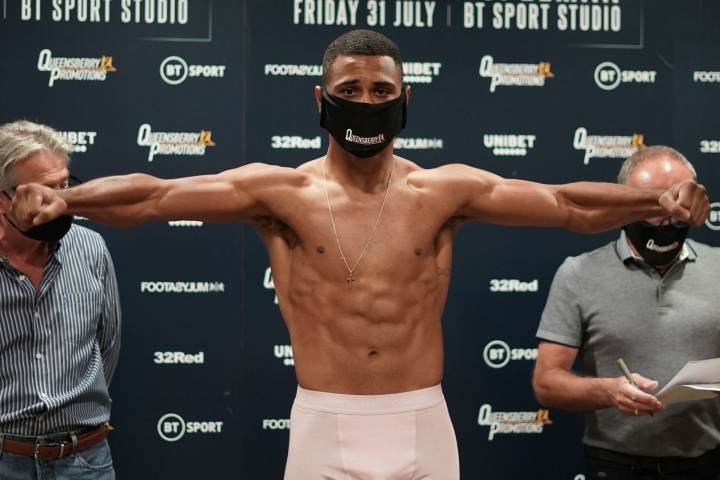 He survived the round, but was knocked down by another concerted body assault in the eighth round. This time Mark Lyson, the referee, thought long and had before allowing Smith to continue, but when he was stopped by a right cross early in the ninth, Lyson waved it off. The end came at 47 seconds of the ninth round.

“Having a first ten-rounder shows me what level I am at. It was a good learning fight for me, a good step-up and we got through it.

“He caught me with one too many right hands, I got complacent, but I adapted, kept my left hand up and got the job done.”

Andrew Cain, a super-bantamweight from Liverpool, extended his unbeaten record to six wins as he forced Ed Harrison to retire at the end of the third round.

The shorter, stockier Cain went after Harrison from the opening bell, keeping his hands low and prowling after his gangly opponent. Harrison ducked, dived and slid away, and while he stood and fought at times, he looked vulnerable to Cain’s power whenever the shorter man found his range.

By the end of the third round, Harrison was bleeding heavily from the nose and he was pulled out by his corner. Lyson refereed. It was Harrison’s fourth defeat in five fights.

Strand dominated behind a rangy jab and while there was a rally by Fidoe in the last round, he never threatened an upset.