This was, after all, no simple switch of opponents. Leo went from facing right-handed Stephen Fulton to slick southpaw Tramaine Williams on just three days’ notice once Fulton tested positive Wednesday for COVID-19.

The unbeaten junior featherweight contender instead downplayed a challenge Williams won’t encounter because he was training to face Raeese Aleem, who, like Leo, fights from a right-handed stance.

There is nothing minor, of course, about the significance of their 12-round, 122-pound main event Saturday night at Mohegan Sun Arena in Uncasville, Connecticut.

Leo and Williams will fight for the vacant WBO junior featherweight championship Mexico’s Emanuel Navarrete relinquished recently to move up to the featherweight division. The first-ranked Fulton (18-0, 8 KOs) and the second-ranked Leo (19-0, 9 KOs) were supposed to fight for it, but the sixth-ranked Williams was placed on Showtime’s tripleheader in case either Fulton or Leo tested positive for the coronavirus.

The 26-year-old Leo, of Albuquerque, New Mexico, has taken a crash course of sorts to better familiarize himself with Williams (19-0, 6 KOs, 1 NC), of New Haven, Connecticut.

“I watched a few films on him [Wednesday] night,” Leo said. “He’s a good fighter. He’s a slick fighter. You know, it’s gonna be an interesting fight. [The] styles, they’re contrasting. So yeah, that’s about it. You know, I seen a little bit of film on him, and pretty much got the gist of him. … I feel like, you know, this fight is gonna be the same outcome [as a fight against Fulton]. He does like to fight on the inside a little bit more. If he wants to box, we can do that, too. Whatever it takes to get the ‘W,’ you know, I’m ready. I’m in the best shape of my life, like I said, and I’m ready for whoever.” 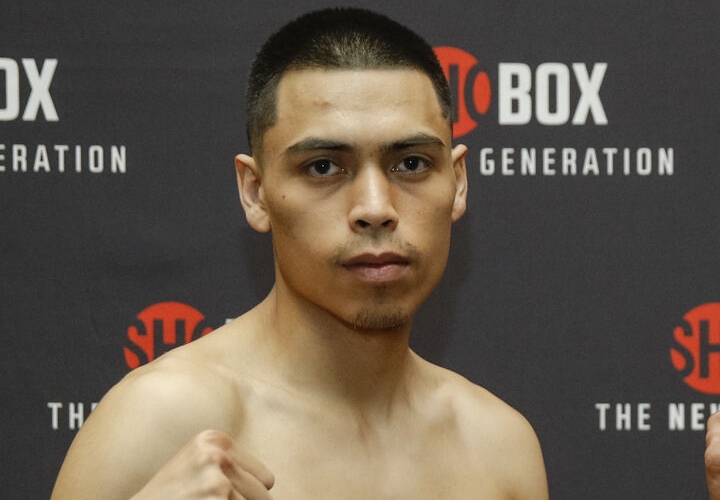 After getting guidance from his promoter, Floyd Mayweather, while he was training in Las Vegas, Leo won’t allow a new opponent to distract him from what he traveled across the country to accomplish.

“He’s a sharper fighter than Aleem,” Williams said. “It looks like he has more experience as well. And that’s about it.”

If Leo defeats Williams, he’ll likely have to fight Fulton next. Fulton’s handlers have petitioned the WBO to have him fight the Leo-Williams winner within 180 days of their fight Saturday night.

“Definitely,” Leo said. “If he wants to fight, I know a lot of people wanted [the Fulton] fight. So, if he wants to fight after this, we can definitely get it on. If not, I’d like to unify against [IBF/WBA champ] Murodjon [Akhmadaliev] or [WBC champ] Rey Vargas or whoever it is. But that’s what I do. I’m a fighter. I’ll fight whoever.”

Leo beat Mexican veteran Cesar Juarez by 11th-round technical knockout in his last fight, December 28 at State Farm Arena in Atlanta. He knocked down Juarez (25-9, 19 KOs) twice in the sixth round and once in the 11th round on his way to recording his first stoppage in more than two years.

The 27-year-old Williams hasn’t boxed in more than a year. He defeated Dominican veteran Yenifel Vicente (36-5-2, 28 KOs, 1 NC) by unanimous decision in his last appearance, a 10-round bout last July 27 at College Park Center in Arlington, Texas.

Fulton had been more active than Williams, yet Leo is treating them similarly.

“You know, it’s nothing different,” Leo said. “These things in boxing happen. You’ve just gotta stay focused. Luckily, Tramaine isn’t too much of a different fighter than Fulton. [They’ve] got similar styles. The only thing, like I said, is he’s a southpaw. So, you know, you make some adjustments. I’m in shape for whoever. Right now, I’m in the best shape of my life, and once I get in that ring, I’ll make adjustments.”