Al Haymon, promoter Tom Brown and Showtime’s Stephen Espinoza prepared as best they could for exactly what happened Wednesday.

They developed a comprehensive, costly contingency plan to keep their televised bouts intact in the event boxers scheduled to participate tested positive for COVID-19. Observing seven of the last 10 main events ESPN and Top Rank produced in June and July get altered, postponed or canceled altogether reinforced the importance of being able to make such adjustments at the 11th hour.

Once they learned that Stephen Fulton tested positive for COVID-19, they immediately moved Tramaine Williams into Showtime’s main event versus Angelo Leo on Saturday night at Mohegan Sun Arena in Uncasville, Connecticut. Leo (19-0, 9 KOs), of Albuquerque, New Mexico, and Williams (19-0, 6 KOs, 1 NC), of nearby New Haven, Connecticut, will fight for the vacant WBO junior featherweight title. 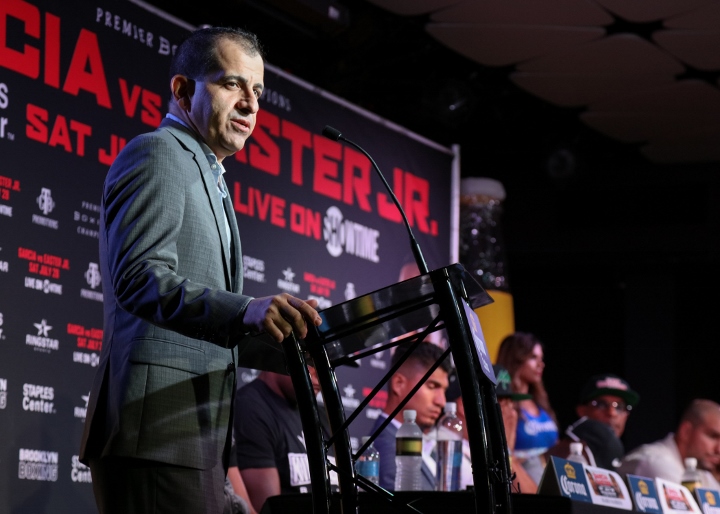 Williams understood when he accepted his co-featured fight against Raeese Aleem that he would fight Fulton or Leo in the main event if either fighter tested positive for COVID-19.

Once Fulton fell out of the main event, they promptly replaced Williams with Marcus Bates in the co-feature, in which Washington, D.C.’s Bates (11-1-1, 8 KOs) will attempt to avenge his lone loss as a professional against Las Vegas’ Aleem (16-0, 10 KOs). Williams and Aleem had been scheduled to meet in the 10-round co-feature of Showtime’s tripleheader.

“In this case, the protocols worked,” Espinoza, Showtime’s president of sports and event programming, told BoxingScene.com. “This positive case was caught prior to Fulton entering into our closed system, so the risk was minimized, and our system worked. Unfortunately, this is now a fact of life. There is no way to eliminate all the risks. All we can do is try to minimize those risks to the greatest extent possible, and to take steps to be prepared. One of the steps we and the promoters and PBC have taken is to have backup fighters ready, fighters who have been tested, who have been training the entire time, who have been paid to keep themselves ready to step in at a moment’s notice in the unfortunate event of a positive test.

“That’s how we’ve been able to keep this card A, largely intact, and B, still stacked with high-quality, competitive matches. To lose someone of Stephen Fulton’s caliber, but still be able to maintain a world title fight with two top-rated contenders is a great alternative to what was a very highly anticipated main event. And to be able to have someone to step in like Marcus Bates to provide a rematch of his only loss to Raeese Aleem is probably the best possible result short of having our original card intact.”

There are only three fights scheduled for Saturday’s card at Mohegan Sun. Without a non-televised undercard, Bates was strictly on standby, training for a fight that might not have happened.

“For future cards, there will be some off-TV fights,” Espinoza explained. “But for this particular event, there were just fighters that were paid to train and be ready, and they were also included in the testing protocols. So, a fighter such as Bates, coming in as a replacement he has already undergone testing, even though he was only a backup. So, his first test wasn’t [Tuesday] or [Wednesday]. He’s been tested previously and obviously been negative all throughout.”

The opener of Showtime’s three-bout broadcast wasn’t impacted by Fulton’s removal from the main event.

In that 10-rounder, light heavyweights Joseph George and Marcos Escudero will meet in an immediate rematch. Houston’s George (10-0, 6 KOs) edged Argentina’s Escudero (10-1, 9 KOs) by split decision in their 10-round bout November 15 at WinnaVegas Casino Resort in Sloan, Iowa.