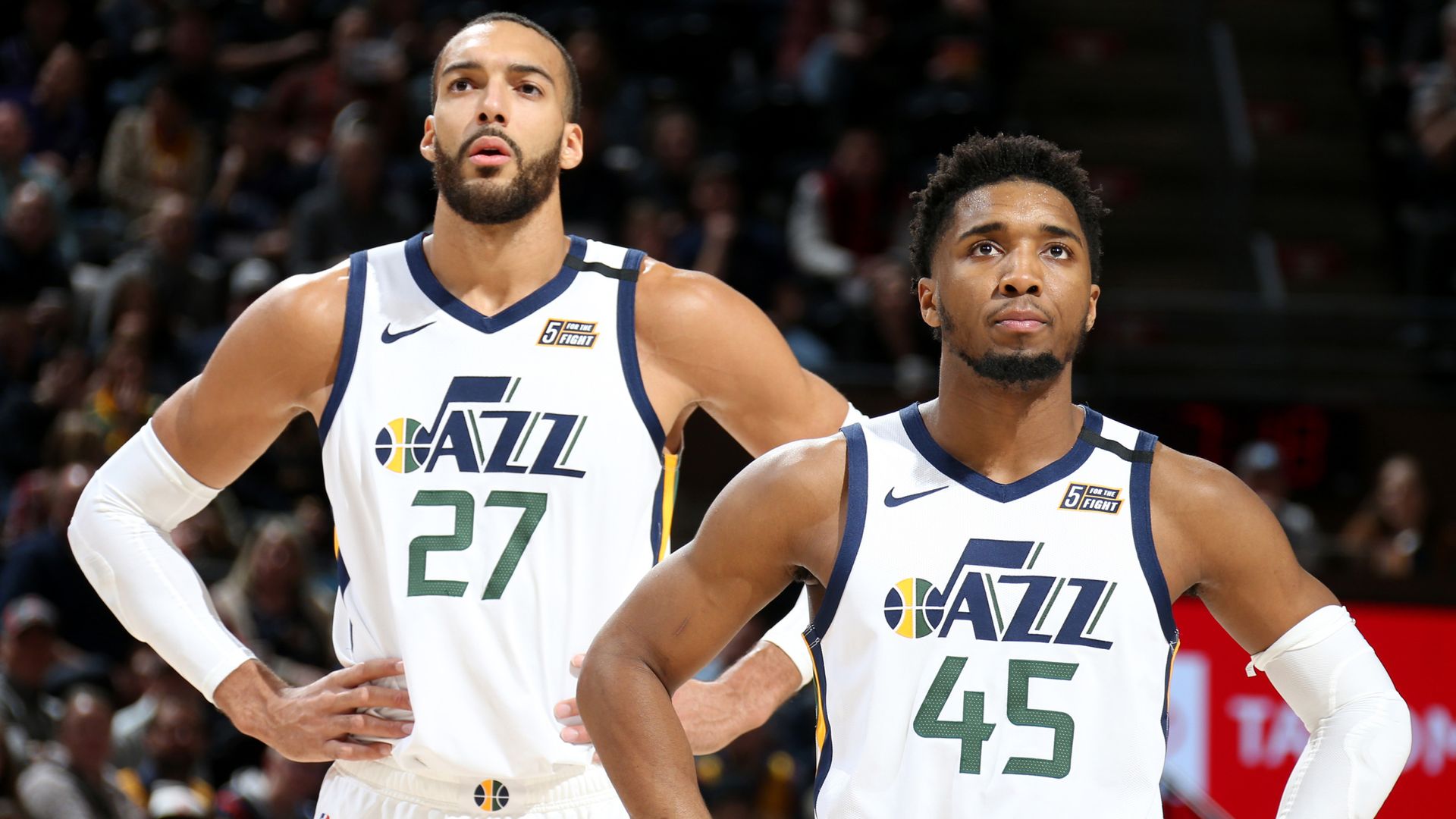 In the absence of Bojan Bogdanovic, repairing the chemsitry between Rudy Gobert and Donovan Mitchell will be key to the Utah Jazz’s success in the NBA restart, writes Sky Sports NBA analyst Mark Deeks.

When the NBA season returns tonight, the Utah Jazz will begin again in the provisional fourth seed in the Western Conference. They had compiled a 41-24 record on the season thus far, closer to the first seed than the eighth, and although they had been struggling to find form at the time of the season’s suspension, that doesn’t matter now.

Coupling their mostly-good play this season with the as-near-as-is 50-win average over the previous three, they are not to be taken lightly. Not least because they are a mere breath away from being in the top 10 in the league in both offensive and defensive ratings (a very important parameter for a contender).

That said, it never felt like a fourth-seed type of season. Big name summer acquisition Mike Conley Jr struggled for all but the very last few games before the season’s suspension.

The theoretical upgrade he offered in shooting over the outgoing Ricky Rubio was supposed to make him a much better fit alongside superstar shooting guard Donovan Mitchell. However, not only did Conley fail to bring his shot with him from Memphis, he also looked to have slowed on both ends of the court, battling yet more injuries in his aging body.

Free agent acquisition Bojan Bogdanovic was a healthy infusion of shooting at the power forward position, especially in contrast to the outgoing Derrick Favors, yet a consistently weak bench required Joe Ingles (himself with declining numbers this season) to return to the second unit. That prevented much of the opportunity for the versatile five-man unit featuring the aforementioned four players plus Rudy Gobert that was supposed to bring Utah into genuine contention.

Streaky all year, the Jazz had won only five of their 10 games before lockdown, only one of which was against playoff opposition, and had gone 9-10 since January 27. The enforced time off may help them to hit the reset button on what was becoming a bit of a slide. It has however been a season of loss in other ways for a franchise that is always under the radar.

Perhaps most notably, legendary former Jazz coach Jerry Sloan, suffering with a form of dementia for some time, succumbed to the illness in May and died aged 84. Sloan had not been in any professional role for the Jazz for some years, yet he remained someone who, distinguished playing career with Chicago aside, became synonymous with the Jazz over the course of the past three decades. The knock-on effect is felt throughout the franchise.

Earlier this month, vice president of player personnel Walter Perrin left the team to join the New York Knicks as their new assistant general manager. General manager Justin Zanik was interviewed by the Chicago Bulls as well (although he ultimately stayed put).

It is a sign of a well-run team that their executives are candidates to be promoted upwards outside of the organisation and sought after for coveted positions, yet it adds instability at a time when stability was already called into question.

Instability on the court went from hypothetical to actual with the surgery for Bogdanovic, one which has cost the Jazz their third-best player and at least – in theory – much of a chance at title contention this season.

Compounding that off the court – and infamously so – was the coronavirus saga, and the spotlight Utah in particular found themselves in.

It was they who were pulled off the court seconds before tip-off back on March 11 that pre-empted the decision to suspend the season, and it was the rift that played out in public between Gobert and Mitchell due to the Frenchman’s now-infamous actions in not treating the spread of the virus seriously that seemed to sow seeds of discord. A recent story by ESPN’s Tim McMahon on the pair’s relationship did not exactly put the fire out.

This was supposed to be a good season, and on paper, judged purely by the wins column, it has been. But it has also been one full of tribulations, some of which were self-inflicted and avoidable.

Still, that is spilt milk under the bridge. When the season does return, the quality of Utah’s on-court product will be most directly determined by how they are able to replace Bogdanovic at power forward.

Whereas Favors’ old school paint size offered better rim protection and a strong rebounding rate, plus the ability to play backup center when Gobert was out of the game, he never paired ideally on the offensive end due to his jump shooting ability being spotty at best.

The incredibly sweet shooting stroke of the Bosnian forward added much-needed spacing to the Gobert/Mitchell pairing (who have never had the best pick-and-roll chemistry, but who need to get it), and was in theory something that would also pair well with Conley. Indeed, it was just starting to, before the injury.

Even then, though, there was no obvious back-up to Bogdanovic. Finding ways to man the position will be key if there is to be a window this year.

Super-utility player Royce O’Neale has shared some of the time at the power forward position, and will likely continue to do so going forward, thus seeing him play everywhere from point guard to power forward at various times, playing heady and unselfish basketball on both ends at all of them.

Yet O’Neale’s size disadvantage, subsequent resultant poor rebounding rate and often-frustrating hesitation when it comes to shooting means it is inevitably still going to be a significant downgrade, no matter how astute and versatile he is defensively.

Georges Niang is smart but slow, Ingles can spend some time there but at the cost of reopening the need for the Ingles role off the bench, and it would be quite a big step up for the hitherto-unwanted Tony Bradley to take much of an active role in the post-‘Bogey’ platoon.

It has been a season of having to overcome things for the Jazz; indeed, it so often is. It was the unstoppably headstrong Sloan’s conflicts with the similarly-stubborn Deron Williams that led to the break-up of their last contending team. Even way back during the glory years of the pairing of John Stockton and Karl Malone, there were numerous times it looked as though Malone might leave.

The Mitchell and Gobert situation is the latest off-court issue to fix, and considering the absence of Bogdanovic, repairing that holds the key to plugging the on-court gaps, too.

Time is a great healer, of course, and Lord knows we have all had enough of that over the last hundred or so days. Now, the concern returns to whether Utah are able to address their needs on the court, because the reset button of the suspension could help them here.

Back in February, it was the Jazz who was spluttering and misfiring; now, everybody is, and if only they can find a way to patch up the rotation, the gap to the field above them has closed.