Stephen Fulton probably won’t have to wait too much longer to fight for the WBO junior featherweight title.

BoxingScene.com has learned that Fulton’s handlers have petitioned the WBO for Fulton to fight the Angelo Leo-Tramaine Williams winner next for the WBO’s 122-pound crown. Pending the WBO’s approval, Fulton would have to fight the Leo-Williams winner within 180 days of their fight Saturday night.

Philadelphia’s Fulton (18-0, 8 KOs), the WBO’s number one contender, was supposed to box the second-ranked Leo (19-0, 9 KOs), of Albuquerque, New Mexico, for that title Saturday night at Mohegan Sun Arena in Uncasville, Connecticut. 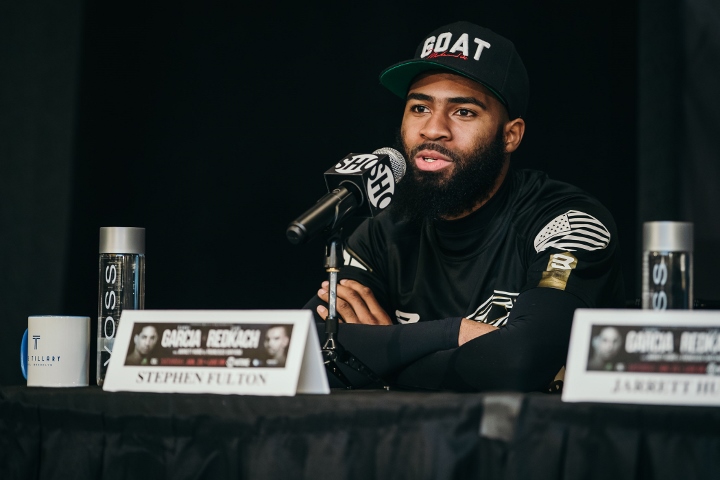 The 26-year-old Fulton tested positive for COVID-19, however, and was removed Wednesday from what was supposed to be the main event of Showtime’s tripleheader.

Williams (19-0, 6 KOs, 1 NC), who was scheduled to face Raeese Aleem in the 10-round co-feature Saturday night, replaced Fulton on three days’ notice. The unbeaten Williams, of nearby New Haven, Connecticut, is ranked sixth among the WBO’s 122-pound contenders.

The Fulton-Leo fight was ordered by the WBO recently once Mexico’s Emanuel Navarrete vacated its junior featherweight title to move up to the featherweight division.

The 30-year-old Aleem (16-0, 10 KOs), a Las Vegas resident raised in Muskegon, Michigan, will meet Marcus Bates (11-1-1, 8 KOs) in a 10-round junior featherweight fight. Bates, of Washington, D.C., will try to avenge his lone professional defeat against Aleem, who beat Bates by unanimous decision in an eight-round bout in April 2018 in Philadelphia.

The opener of Showtime’s three-bout broadcast remains the same, a 10-round immediate rematch between light heavyweights Joseph George and Marcos Escudero. Houston’s George (10-0, 6 KOs) beat Argentina’s Escudero (10-1, 9 KOs) by split decision in their 10-round encounter November 15 at WinnaVegas Casino Resort in Sloan, Iowa.

Showtime will televise live boxing Saturday night for the first time since March 13, when it aired a “ShoBox: The New Generation” tripleheader from Hinckley, Minnesota. This tripleheader is the first of nine cards Showtime officially announced last week, a four-month run that includes two pay-per-view events.