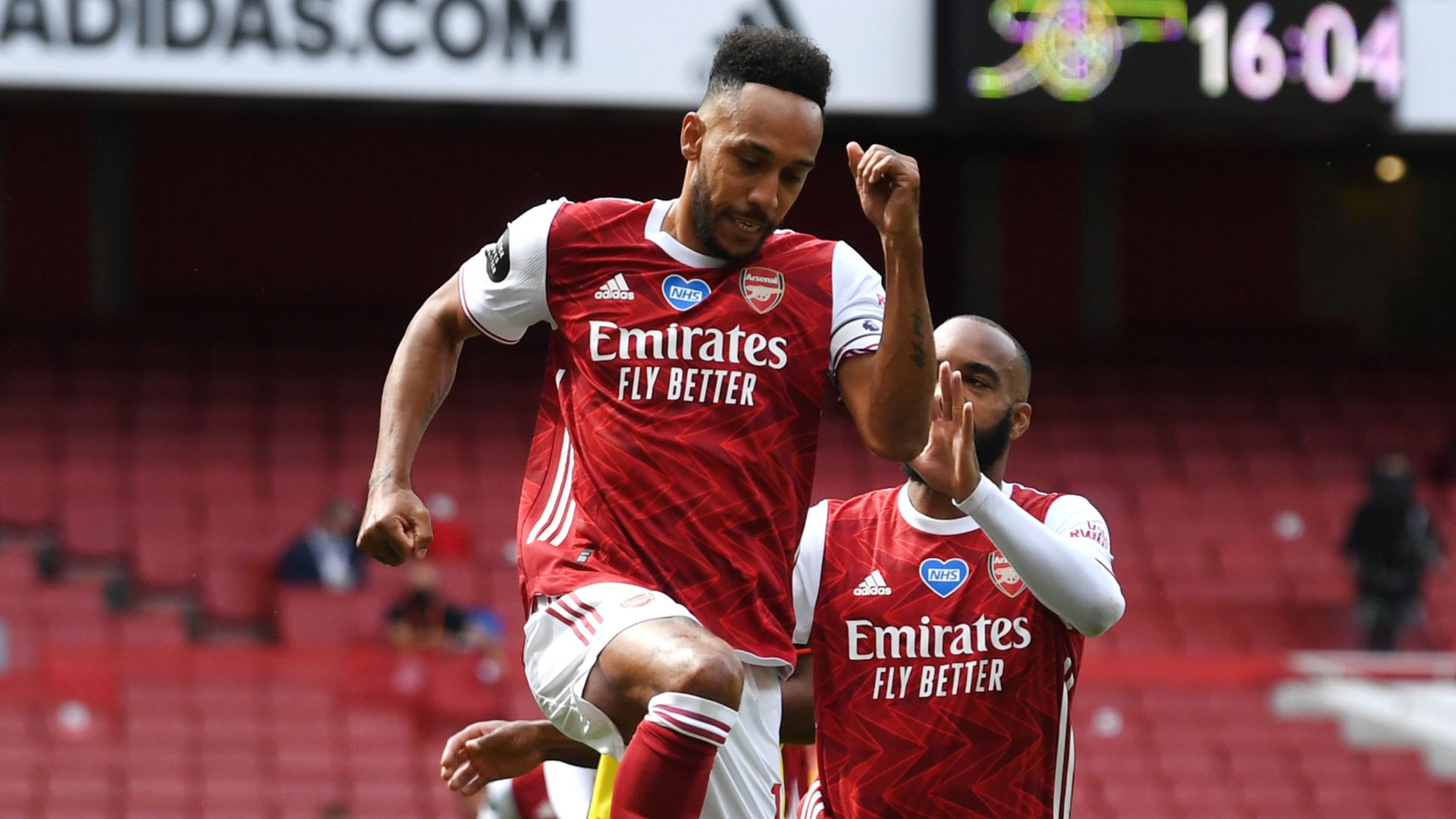 Pierre-Emerick Aubameyang signing a new contract at Arsenal will be as big as winning FA Cup, Charlie Nicholas has said ahead of Saturday’s final.

The Arsenal captain has just a year left on his current deal and there have been rumours linking him with a move to the likes of Real Madrid and Barcelona.

But the Soccer Saturday pundit says the striker signing a new deal would match a victory in the FA Cup final against Chelsea this weekend.

He told Sky Sports News: “It’s vital keep hold of him, but if Real Madrid or Barcelona were to show interest in him at his age, and he wants to go, he’ll go. We had to let the best I’ve seen in an Arsenal shirt – Thierry Henry – go because he wanted to join Barca.

“That’s the reality as this guy is a goal machine. When you look back at the wages we gave Mesut Ozil, we had to put up with Alexis Sanchez until we part-exchanged him… this guy is of the same ilk where you’re wondering if it’s worth giving him the big salary.

“Personally, I think it is as there’s very little guarantee in football but the guarantee he gives you when he’s fit is goals. Goals for Arsenal is the main ingredient in the way they play. Arsenal’s duty now is to fix a defence that has been weak for the past six or seven years.

“Gradually, I think Arteta will do that, but the club are still being held to ransom a little bit [over Aubameyang]. If Arsenal are to finally get this [contract] over the line, you give him what he wants, and then Aubameyang still becomes a sellable asset if he then wants to leave in a year.

“But if we run it down, as we did with Aaron Ramsey, you’re just holding on to someone who isn’t entirely committed to the cause. I’m hopeful now that Aubameyang will re-sign – Arsenal, get it over the line! It would be as big a boost as winning the FA Cup. That’s how big it would be.”

Another player who has been linked with an exit is Mesut Ozil who has been conspicuous by his absence this season, appearing in just 18 Premier League games and not stepping onto the field at all after the restart.

Nicholas added: “The wages that Ozil has been getting has been ridiculous, but that’s not Ozil’s fault. That’s down to the committee and the board who gave him the money and said, ‘we think you are well worth this value’. I don’t know how they got to that assumption.

“This is a fabulously talented footballer with a brilliant CV at Real Madrid and at national level – we know that. But Arsenal have struggled to get consistent performances out of Ozil. He doesn’t offer the same guarantee as Aubameyang.

“Ozil has made so much money and he will be bored. He will be frustrated and fed up, and when he gets the right deal he will eventually move on. He won’t be sitting around with his little umbrella in the sunshine for much longer as it’s a habit of life! He wants to go and play.”

‘FA Cup win vital for both Arteta and Lampard’

Before any ins and outs are sorted, Arsenal must face Chelsea at Wembley on Saturday and should the Gunners win, they will book a spot in the Europa League group stages next season.

When asked how vital it is for Arsenal to make it into Europe, Nicholas said: “It’s very important for Arteta as having walked through the door he’s found the poorest Arsenal team in the Premier League.

“He’s had to deal with individuals like Matteo Guendouzi not responding in the way he wanted him to, he’s had to wait for Kieran Tierney to get fit, how bad is the defence, the injury to his goalkeeper Bernd Leno… he’s had nothing but problems.

“But he’s gradually given us, as Arsenal people, hope. I’ve heard people say that if he wins this, it will cover over the cracks. It won’t. Arsenal were in decline and have been now for five, six, seven seasons.

“Arsene Wenger, towards the end of his reign, kept on winning FA Cups just to keep things going. When you’re new and you bring in a winning mentality, that is part of the fabric of the rebuild.

“As an Arsenal man, I’m pretty confident that things are going in the right way, we’re kind of limited defensively, but I do think that Arteta knows exactly what he’s got, and I think recently, with the bad results we’ve had against the big teams, beating Liverpool and beating Manchester City I think proved a point.

“They go into this one with confidence, with belief, and it’s just two teams that just love to attack.

“It will be a back three for Arsenal with David Luiz as the central figure – we will have to rely on him. The thing about Chelsea is that they’ve been playing a back three also, and I don’t think they’re any better defensively than Arsenal.

“The wide areas are going to be key and I’m delighted that Tierney has finally been able to get fit and he is starting to look the real deal for Arsenal. This is where I feel Arsenal could win this, with pace and pinning Chelsea back.

“My main concern isn’t so much the form of Arsenal’s former player Olivier Giroud, but the player who’s impressed me as much as Kevin De Bruyne and Sadio Mane has been Christian Pulisic.

“He’s been breath-taking to watch, and as an Arsenal fan I’m worried about him in this final. But Arsenal have pace and goals in the team. I’d like to see Bukayo Saka start rather than Nicolas Pepe with Alexandre Lacazette and Aubameyang, but overall, I’m confident and I could see Arsenal just nicking it.”