Showtime announced eight events last week, a run scheduled to conclude December 12. Each of those telecasts are tentatively slated to be held at Mohegan Sun, though that could change if COVID-19 restrictions are loosened elsewhere and fans can attend cards.

“I really would’ve liked to have explored the sound stage, and we were pretty far down the road on that,” Espinoza, Showtime’s president for sports and event programming, told Chris Mannix for the newest episode of his Sports Illustrated boxing podcast. “And really where the complications were, were union issues. When you go on to a set, generally a set on a lot, generally it’s a union set. And it doesn’t always compare apples to apples, in terms of those unions and what we do on live sports production. You know, and in the grander scheme of things we had some things that needed to be ironed out.

“But I’m not sure that we would’ve gotten a whole lot of attention. I mean, the unions and the guilds are engaged in, you know, marathon talks right now just to get series production on the air. We wouldn’t have been a priority. ‘Hey, can you negotiate a special exception, so we can do boxing on the CBS lot?’ You know, it seemed like a lot more trouble than it was gonna really be worth and really bad timing to do that. So, we looked elsewhere.” 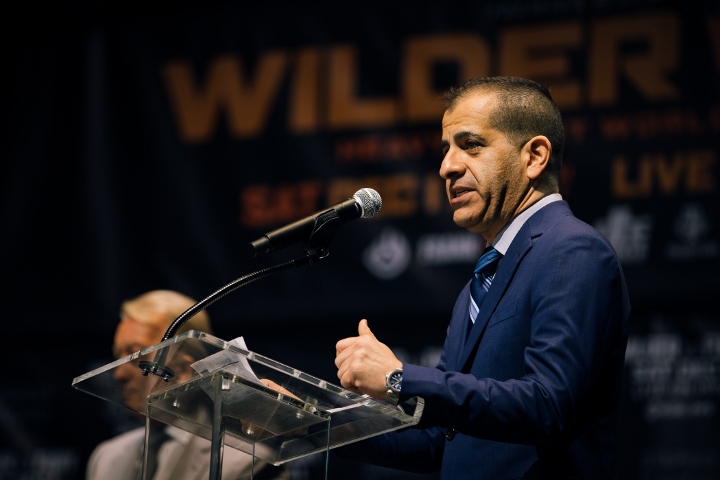 “We looked at Vegas,” Espinoza explained. “Vegas was, you know, really busy with UFC and Top Rank [boxing cards]. And there were some concerns with the commission on whether they can have enough personnel because we really wanted to partner with Bellator. That was key for us. I mean, it makes sense, you know, for us synergistically. But there are some real cost benefits, so we knew we wanted nine or 10 events over 12 weeks, which means we have to be there exclusively.

“So, we had to go somewhere where the venue was gonna say, ‘Here, you can move in this date and stay continuously.’ So, we’re only loading in once, we’re only loading out once. We came up with a production/lighting structure that is basically very similar for MMA and for boxing. So, all we have to do week to week is switch the ring for the cage. So, once you do that, and once we figured out we wanted to go to a one-stop shop, you know, there’s a limited number of places. You know, there’s Vegas, and once you eliminate that, there’s a handful of others.”

After Saturday’s telecast, Showtime is scheduled to bring boxing back to Mohegan Sun on August 15. David Benavidez (22-0, 19 KOs) will defend his WBC super middleweight title against Colombia’s Roamer Alexis Angulo (26-1, 22 KOs) in the 12-round main event of another three-bout broadcast that night.