Vergil Ortiz Jr. never stressed about the long delay between fights or the circumstances surrounding his latest ring adventure.

The unbeaten rising welterweight made his 2020 debut, seven months after earning universal recognition as 2019 Prospect of the Year. The lengthy absence was entirely due to the ongoing coronavirus (COVID-19) pandemic, which wound up hitting home ahead of Friday’s clash with Canada’s Samuel Vargas.

Ortiz was without the services of head trainer Robert Garcia, who tested positive for COVID-19 upon arrival outside the quarantine bubble at Fantasy Springs Resort Casino. Fight night instructions instead came from Vergil Ortiz Sr. and Hector Beltran, all while fighting without fans in attendance.

Once the opening bell sounded, everything felt normal again.

“My dad pretty much is my coach. He’s obviously known me his whole life,” Ortiz joked to BoxingScene.com following his 7th round stoppage of Vargas. “He’s been in my corner the whole time. He was always giving me advice whether he’s the chief or not. I’ve known Hector Beltran for a long time since I was an amateur.

“As much as I would have loved Robert being there, the fight worked out the way we wanted.” 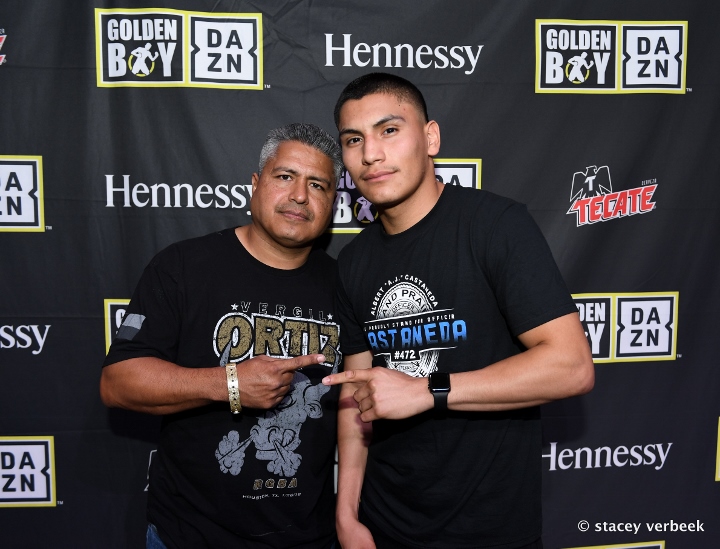 The one-sided affair saw Ortiz connect on 48% of his total punches, including 66 landed punches in the decisive round seven. It all came without the benefit of a raucous crowd, a far different scene from when he wrapped up his four-knockout campaign last December in this very venue.

Rather than playing to a normall packed house, Ortiz’s latest performance was limited to approved essential personnel.

“I didn’t notice, I was just so focused on the fight,” insisted the 22-year old from Grand Prairie, Texas. “I didn’t really notice the difference. It was different but Golden Boy is like my family and they were cheering for me.

“It wasn’t anything different for me. It felt like just another fight. When I’m fighting it’s just me and my opponent.”