Pacquiao, 41-years-old, has been inactive since July of 2019, when he captured the WBA welterweight title with a twelve round unanimous decision over unbeaten Keith Thurman at the MGM Grand in Las Vegas.

There had been talk of Pacquiao fighting in the first half of 2020, but the coronavirus pandemic put those plans on the shelf. 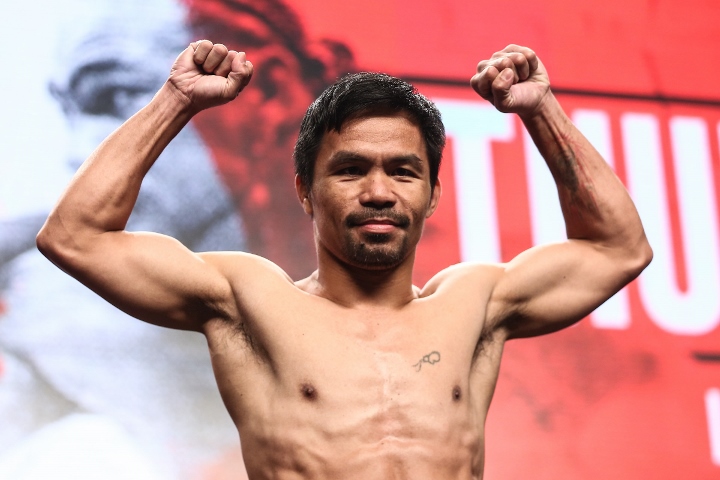 Pacquiao is still in hot demand and several countries are interested in hosting his next fight – with the United States and Saudi Arabia in high consideration.

However, MP Promotions President Sean Gibbons indicates that Pacquiao’s return will depend a lot on how the pandemic plays out in the next few months.

“There’s a possibility [that Pacquiao will fight this year], but you’ve got to remember, there’s a lot of things that have to happen. First of all, COVID-19 needs to rapidly get slowed down in the US or in Saudi Arabia, where we’ve had offers,” Gibbons said in an interview on the Philippine Sportswriters’ Association Forum, as reported by ABS-CBN Sports.

“Now, if somehow, Saudi Arabia, who has shown great interest in the Senator fighting there before COVID-19 hit, if they were to come around, that would be good for the Senator because he wouldn’t really have to miss that much time like he does, having to come to the US.

“And the other thing is the Senator’s schedule, again. You’ve got to remember, his time to fight is generally July, January… July and January due to his schedule in the Senate.”

The veteran boxer has stayed in shape by working out at home on a regular basis. When he prepares for his scheduled fights, he trains under close friend Buboy Fernandez and Hall of Fame trainer Freddie Roach.