Eddie Hearn, promoter for IBF, WBC, WBO, WBA lightweight champion Katie Taylor, says the boxer has been desperate to silence the critics who believe Delfine Persoon won their bout in June of 2019.

Taylor was a very close ten round majority decision over Persoon at Madison Square Garden in New York City. There were many who felt Persoon had done enough to get the decision win.

Taylor was initially scheduled to face Amanda Serrano on the Dillian Whyte-Alexander Povetkin undercard on August 22 in Brentwood. 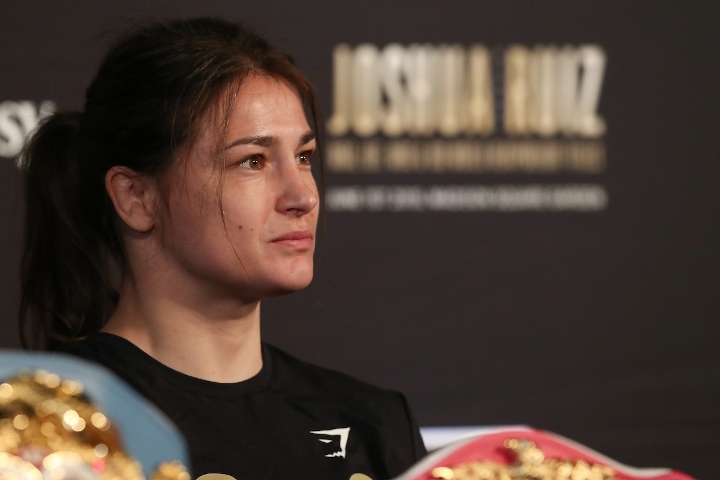 But then there were financial issues that both sides were unable to fix as the weeks ran down.

When Serrano fell out as the opponent, Taylor jumped on the opportunity to face Persoon in a rematch.

Taylor is motivated to set the record straight regarding who won their first contest.

“I think ever since we walked back to the changing rooms, Katie Taylor has thought, ‘I want to put that thought out of people’s minds. It was a close fight, I believe I won but I will do it again and I will prove to you that I am the best’.”

Taylor vs. Persoon is part of Hearn’s ‘Fight Camp’ series.

“I wanted to bring boxing back with a bang, we’re a major sport and we had to make a big impression,” Hearn said.

“Everybody would prefer to fight in a packed arena but I think fighters started to realise ‘I can’t afford for my career to stall’.

“We hope this isn’t going to be the new norm but what you are going to see on Saturday is something very different and there are going to be a lot of people tuned in to see the start of Fight Camp where, for the next four weeks, this will be the home of boxing.”