Bob Arum hasn’t given up on making a long-elusive fight against Manny Pacquiao next for Terence Crawford.

Arum informed BoxingScene.com that Pacquiao is among Crawford’s potential opponents for his upcoming bout. Crawford’s promoter confirmed that the unbeaten WBO welterweight champion will return to the ring November 14 or November 21 regardless of whether he can secure Pacquiao as Crawford’s opponent.

If a Pacquiao-Crawford fight were put together for November 14 or November 21, their pay-per-view main event would not take place in the United States because there is no guarantee fans will be able to attend sporting events in the U.S. by then. Arum has had discussions with interested investors from other countries who could pay a sizeable site fee for that 147-pound title unification bout, but Pacquiao’s former promoter acknowledged that it is far from a done deal. 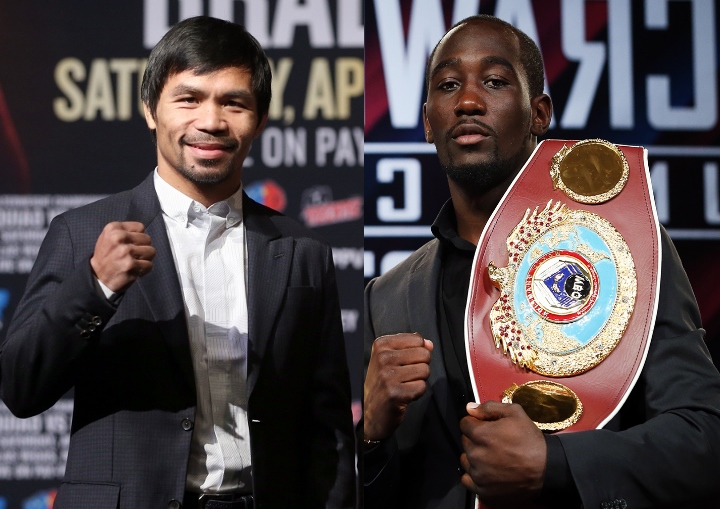 Crawford has wanted to box Pacquiao for several years, but the feeling wasn’t exactly mutual when Arum’s company, Top Rank Inc., promoted both boxers. Now that the Filipino legend is interested in their showdown, Crawford has repeatedly stated in recent months that he wants to battle Pacquiao next.

“The Pacquiao fight, obviously we’d like to do it,” Arum told BoxingScene.com. “Whether we can do it, how we can do it, that’s what we’re figuring out now. Obviously, if it can happen it’ll happen, and if it can’t happen, it won’t happen. But nothing is concrete on that. We hope we can do it. We’re trying, but this is not a usual situation.”

The 41-year-old Pacquiao and the 32-year-old Crawford would end long layoffs against one another if they fight November 14 or November 21.

Arum has regularly mentioned England’s Kell Brook (39-2, 27 KOs), a former IBF welterweight champ, as a possible opponent for Crawford’s next bout as well. Crawford would accept a Brook bout, yet he is much more interested in finally facing Pacquiao.

“We told Terence that he’s scheduled to fight in November,” Arum said. “If it can’t be Pacquiao for various reasons, then we’ll match him with somebody else. But we told Terence to prepare for mid-November, whether it’s the 14th or the 21st.”

Whomever Crawford faces next, the three-division champion has made it clear that he won’t consider accepting any type of pay cut predicated on the economic impact of the COVID-19 pandemic.

Arum is exploring sites outside the United States for Pacquiao-Crawford because a significant site fee would help offset the gate revenue that’s unavailable because fans can’t attend boxing matches in the U.S. Under normal circumstances, Arum could charge premium prices for Pacquiao-Crawford tickets at various venues in Las Vegas.