We’ve been talking about it for weeks and now it’s finally official.

Needless to say, the announcement drove many into a full-on tizzy – having followed their several months’ worth of insistence that “Iron Mike” would instantly re-ascend the heavyweight peak.

The way he snarled when he hit the pads and barked as he savaged the heavy bag.

It all pointed to an inarguable reality, they said.

Tyson Fury, Anthony Joshua and Deontay Wilder – in any order or parlay – were dead meat.

And if you dared suggest otherwise, be prepared for a full-scale digital assault.

I mean, sheesh… don’t you remember the way he bounced Trevor Berbick like a basketball, rendered Marvis Frazier a flaccid windsock and scared Michael Spinks to the brink of night sweats?

Just because the last of them occurred while Fury was in utero doesn’t make it any less awesome.

Then you’re clearly not aware of the works of Bernard Hopkins and George Foreman, they’d insist. 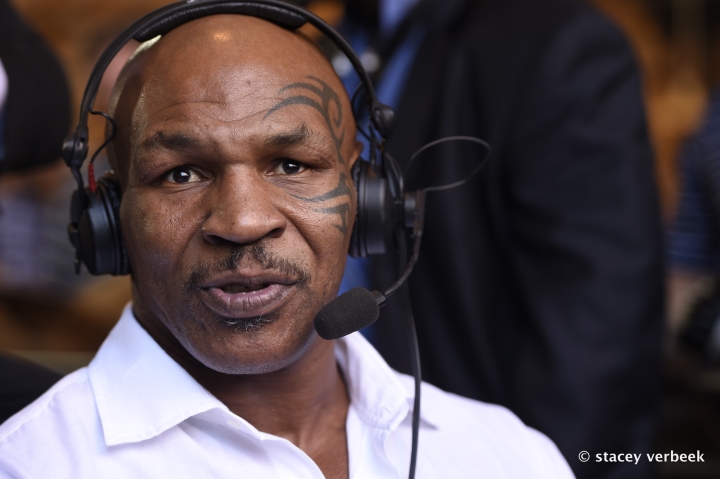 Lest you forget, the former was still a belted champion at 175 pounds within two months of birthday No. 50, and the latter began his second heavyweight reign when he was 10 months past celebration 45 – which clearly proves that popular fighters of advanced age are just as capable as today’s youngsters.

And even though Mike is four and nine years older than they were, respectively – and both Hopkins and Foreman had been active for several years, while he’s been dormant for 15 – it doesn’t matter.

Because, you know… the Tyson Rule. Nothing after Tokyo matters.

Amazingly, in the interminable dumpster fire that is 2020, the delusion played.

And it picked up steam now and then, too, whenever someone with even a sliver of boxing cache suggested anything other than Tyson ought to seek counseling for chronic nostalgia syndrome.

For a while, it seemed like a never-ending cycle.

But then, just as the inbox ticked toward fanboy overload… it came.

A sycophantic intervention. Courtesy of Tyson himself.

As the hordes scrambled to frame Jones – a retired 51-year-old without even a marginal win since Obama’s first term – as the ideal short-cut to a 2021 title shot, their hero let them in on the gag.

It was all a brilliantly contrived sales job.

The comeback “fight” is actually an eight-round exhibition in which they’ll wear oversized gloves.

And, in the words of a California State Athletic Commission official, they’ll certainly not be “going out there to try to take each other’s heads off.” Instead, he said to Yahoo Sports, “They’re just going to be in there moving around the ring and letting fans see these legends.”

So, Tyson is about as likely to meet a top-10 foe as I am to complete a vegan cleanse.

Instead, their “Frontline Battle” is simply a high-profile premiere for the ex-champ’s newest venture — the “Legends Only League” – which, according to website promo language, caters to every athlete’s “drive to continue on, to fight, and to never give up” and “brings the best of the best back into the ring, onto the court, and back on the field. Because talent, skill, and the drive to compete never go away.”

All kidding aside, it’s a million-dollar premise (T-shirts and hoodies are already going for anywhere from $24.99 to $64.99, for God’s sake) and no less an expert than Randy Gordon wouldn’t be surprised if the pay-per-view extravaganza – which will include “significant undercard matches as well as iconic musical performances” (gasp!) to be announced – reaches well into seven figures in terms of buy rate.

Given the breathless reaction to workouts and sparring sessions, he’s probably not wrong.

“Tyson can have much more fun against Roy Jones in an exhibition than he can against Tyson Fury in a real fight,” Gordon said. “Even though it is being billed as an exhibition, Tyson’s legend continues to grow. No matter where the pay-per-view is set, it will not surprise me to see over a million buys on this.”

For a pandemic-weary sports world, it’s an ideal spectacle.

Endless possibilities for the next time around… Tyson-Douglas II, anyone?

In fact, the only victims are the dupes who didn’t see it coming in the first place.