Junior lightweight world titlist Jamel Herring, who has had a defense against Jonathan Oquendo postponed twice because of positive Covid-19 tests, is rescheduled to fight him again.

The fight is due to headline a Top Rank Boxing on ESPN card on Sept. 5 from “the bubble” inside the conference center at the MGM Grand in Las Vegas, which also played host to Top Rank’s Tuesday and Thursday cards for most of June and July.

Top Rank promoter Bob Arum said he has his fingers crossed that Herring’s issues with the coronavirus are now over and that he will be able to successfully defend his 130-pound world title and set up a major fall fight with former featherweight and junior featherweight world titlist Carl Frampton.

“You’re not Dr. (Anthony) Fauci and I’m not Dr. Fauci, so who the hell knows, but I can’t believe he will be positive again. I just think you wait six weeks and it’s gone and we can do the fight. But do I really know? No,” Arum told BoxingScene.com. 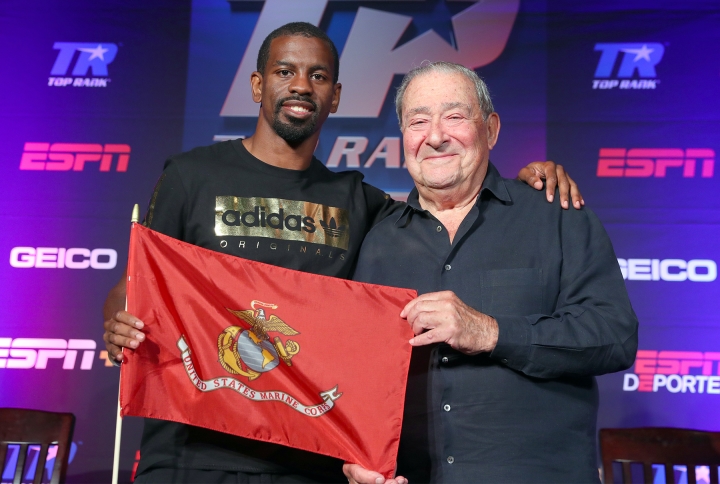 Herring (21-2, 10 KOs), 34, a Coram, New York, native and Marine Corp. veteran, was initially supposed to make his second defense against Oquendo (31-6, 19 KOs), 36, of Puerto Rico, on July 2 but the fight was postponed when Herring tested positive and showed mild symptoms.

The bout was rescheduled for July 14, but when Herring arrived in Las Vegas two days before the bout he was tested upon his arrival and quarantined in his room while awaiting the test results, which turned up positive the morning before the fight. The next day he tested negative with most believing that the second test result was a false positive. However, the protocols put in place by the Nevada State Athletic Commission and Top Rank meant the fight had to be scrapped for the second time.

But Herring messaged BoxingScene.com on Monday and said he was getting ready to fight Sept. 5.

“We’re more than willing (and) happy to honor our contract,” Herring said.

“He’s fine,” said McIntyre, also confirming to BoxingScene that the fight with Oquendo would take place on Sept. 5. “Matter of fact, after Jamel tested positive the second time, the very next day he tested negative. We all thought it was a false positive. So we took it on the chin. He went home for two weeks and came back on Monday. We are picking up where we left off.

“There’s four weeks left of training but we’re definitely being careful. We won’t go right back to sparring 12 rounds. We don’t want him to overtrain. We’ll cut it back down but he will stay in shape. He was disappointed the fight with Oquendo had to be called off for the second time because this fight is his biggest payday so far and he was looking forward to that.”

McIntyre revealed that he also tested positive for Covid-19 shortly after Herring’s first positive test, and he was not that surprised.

“I tested positive right after Jamel did. He probably gave it to me because we work the pads together,” McIntyre said. “I had mild symptoms so I coached from across the gym with a mask on, yelling at the coaches and Jamel.”

He said the others at his gym, including welterweight world titlist Terence Crawford and former junior welterweight titlist Maurice Hooker, were tested as a precaution and were negative for the coronavirus.

“Bob did tell me after this fight it will be Frampton after that,” McIntyre said. “As long as we come out unscathed and Frampton also, I think it’s supposed to be late November or the beginning of December.”

It’s a fight Frampton is also looking forward to.

“The Jamel Herring fight was meant to happen in the summer but got ruled out (because of the coronavirus pandemic), so this (against Vardanyan) is a fight that keeps me busy and keeps me active. Hopefully, I get the win here, and then we can have the Herring fight for the world title later this year or in early 2021, Frampton said.