Claressa Shield can’t help but think that the grass is greener on the other side.

The two-time Olympic gold medalist and three-division titlist is one of boxing’s standout talents and the current poster child for woman’s boxing in particular.

But Shields (10-0, 2 KOs) knows she would be fooling herself if she didn’t think that the gap between female boxers and their male counterparts still remains dauntingly wide…everything from pay to the marketing budget. She has noticed, though, that this discrepancy doesn’t really exist over in the mixed-martial-arts universe of the UFC – or at least it’s not as wide as it is in boxing.

“In MMA there’s just more exposure than woman’s boxing,” Shields told Brian Custer on The Last Stand Podcast. “I hate to say it…from me just looking at social media, from me just seeing that they’re the main event on every other card and people are coming and filling up arenas for them. We don’t have that in woman’s boxing. I haven’t even been on pay-per-view yet and I’m a three-time division world champion. But Gervonta ‘Tank’ (Davis) [is about to be] on pay-per-view. It’s like, it’s just not equal.” 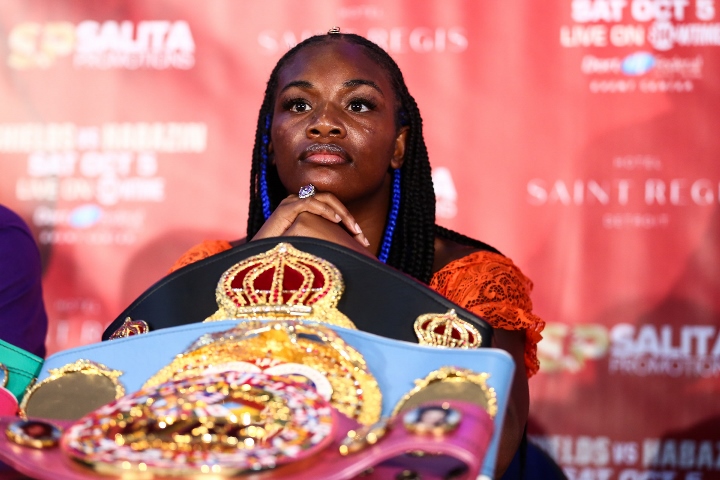 Davis is projected to fight Leo Santa Cruz on October 24 at the Mohegan Sun in Uncasville, CT on Showtime Pay-Per-View.

“Over in the MMA I love how it’s equal,” Shields, 25, said. “You have some fights where the men are the main event. And you have the same amount when the women are. Women are on pay-per-view and in boxing it’s just not the same way.”

The Flint native, of course, is referring to the likes of Amanda Nunes, Cris Cyborg, Holly Holm, Rose Namajunas, and Joanna Jedrzejczyk, to name a few, all of whom have headlined in big bouts in the UFC.

Shields, who is promoted by Dmitry Salita, understands that you can’t just transpose the UFC’s success into boxing overnight, which is why she has told the powers that be that she is willing to fight on the undercard of a big boxing pay-per-view show – provided that the main event features a world champion.

Still, Shields believes she has made progress for women’s boxing. She recalled the time when it took longer for a fight poster to be made for one of her fights than it was for, say, a fight between two male fighters.

“I noticed that when I fought against Hannah Gabriel, I noticed that we didn’t get a poster for until we were like 5 weeks out from the fight, which, that’s a decent amount of time, but when you pay attention and see that they’re talking about another fight that’s two months or two months and-a-half out, that’s 8 to 10 weeks compared to 5,” Shields said. “But they wanted to get as many viewers for the guys they promoted (through) promos and commercials…(we) get the same amount of exposure but with less time of promotion. So I spoke on that and I don’t think it was done on purpose, but I feel like they didn’t have any other women fighters (before) speak on that.”

“But I’ve been trying to figure out ways to get more exposure through boxing and to welcome everybody to see that the game of women’s boxing has changed,” Shields continued. “We have some great fighters now. They were good back them, no disrespect, but we’ve got women who actually make boxing their career. I’ve been boxing since I was 11 years old, I’m 25, (that’s) 14 years!”