The win and the manner in which it came about was just another night in the office for Edgar Berlanga.

However, it was so much more for the heritage he proudly represents.

The Brooklyn-bred Nuyorican extended his perfect streak of 14 1st round knockouts in as many fights. The latest victim was Marietta, Georgia’s Eric Moon (11-3, 6KOs), who lasted just 62 seconds in their ESPN-televised chief support Tuesday evening live from a crowdless MGM Grand Conference Center in Las Vegas.

“It was amazing,” Berlanga told BoxingScene.com. “I know a lot of Puerto Ricans were at home watching. I’m blessed to be in this position.” 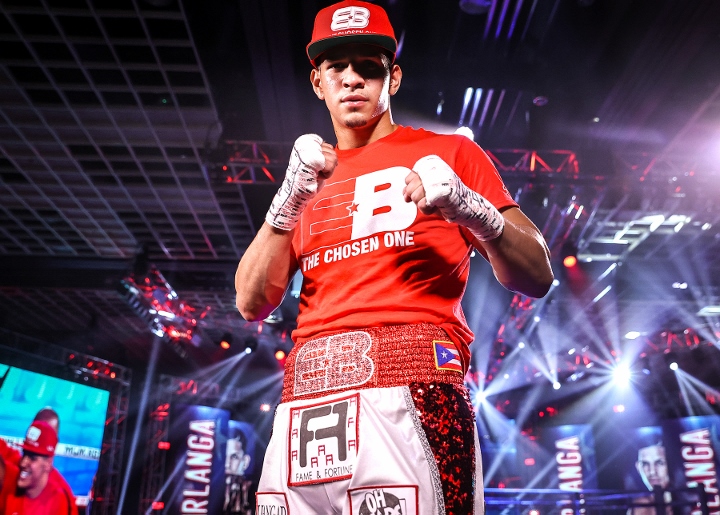 Fighting in an empty ballroom more than 2,500 miles away from home wasn’t quite the vision Berlanga (14-0, 14KOs) had for his first fight of 2020. The 23-year old knockout artist was due to have appeared on a March 14 card at Madison Square Garden’s Hulu Theater in New York City, in supporting capacity to Shakur Stevenson in a planned featherweight title defense versus Colombia’s Miguel Marriaga.

Berlanga had just played the main room at MSG three months prior, selling upward of $40,000 worth of tickets for the show. By his own account, more than double the support was in store for his March clash only for the event to get shut down by the initial wave of the ongoing coronavirus (COVID-19) pandemic.

“When they canceled my fight March 14, I was a little hurt,” Berlanga confessed. “It was a chance to fight in front of my people.”

At the time, it was sorely a win that Boricuas needed, for reasons well beyond the ropes. The southern coast of Puerto Rico suffered massive damage from a series of earthquakes from last December early into the new year, with much of the island going days without power as a result.

It came just two years after the devastation of back-to-back hurricanes from which many residents only recently fully recovered. Little time was afforded to recover from earthquake damage when COVID-19 began to spread through Puerto Rico and around the world.

Needless to say, however long or short Berlanga’s fights last these days, every second of them as well as all of the preparation leading in always comes in honor of La Bandera Puertorriqueña.

“This fight was dedicated to all my people on the island, they’ve been going through so much,” Berlanga humbly notes. “Every fight I take, I dedicate to them. It’s just an amazing feeling to be where I’m at representing the island.”