Blessed with the opportunity to return to action, David Benavidez can’t envision many reasons that would keep him out of the ring any longer than has already been the case.

Not even having to fight for less money.

The unbeaten super middleweight was refreshingly candid on the subject of the expectation of boxers having to settle for smaller fight purses amidst the ongoing coronavirus pandemic. With the inability to fight in front of crowds and promoters still finding creative ways to bring back boxing in some capacity, has come a standoff with many of the sport’s biggest names who rightly refuse to move forward without receiving what they feel is due—and in many cases, contractually-promised—compensation.

For now, Benavidez (22-0, 19KOs) can’t entirely relate as the subject has yet to surface in his world. At the very least, it hasn’t affected his plans for an August 15 title defense versus Miami’s Roamer Angulo (26-1, 22KOs), which will air live on Showtime from a crowdless Mohegan Sun Casino in Uncasville, Connecticut.

“It’s understandable to think that taking a paycut isn’t fair,” Benavidez noted on the subject during a recent virtual press conference to otherwise announce his rescheduled bout versus Angulo. “My contract states that my deal stays the same for this fight and the next fight.” 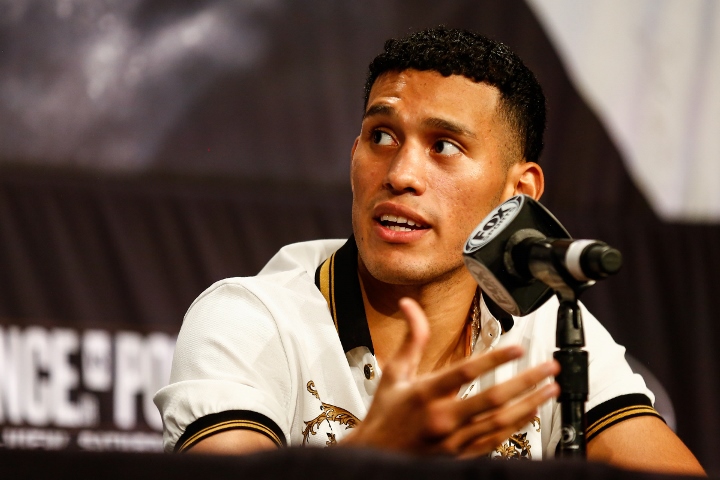 The subject hadn’t come up when it came time to finalize his rescheduled fight versus Angulo. Their bout was originally due to take place April 18 in Benavidez’s hometown of Phoenix, Arizona. A sizable crowd was expected for what would have marked his first fight at home in nearly five years, but such plans could not resurface as everyone continues to navigate around the current global health crisis.

By the time fight night rolls around, Benavidez will enter the ring for the first time since regaining his super middleweight title 11 months ago. A 9th round stoppage of exiting titlist Anthony Dirrell came last September in Los Angeles, the second fight of 2019 for Benavidez after going 13 months between fight—much of which was due to serving a suspension after testing positive for a banned substance through random drug testing.

The previous gap between fights cost Benavidez his super middleweight title he worked too hard to regain. Even with time on his side as he is still months from his 24th birthday, taking any more time than necessary away from the ring is no longer an option—even if it means settling for less in the short-term in order to be properly rewarded down the road.

“If I have to take a paycut, I will take a paycut,” Benavidez insists. “That’s up to my promoter and my manager, you know—we can definitely come to an agreement.