They first met in June 2019, at Madison Square Garden in New York City.

Taylor won a razor close ten round majority decision, but there were many observers who felt Persoon had done enough to get the win. 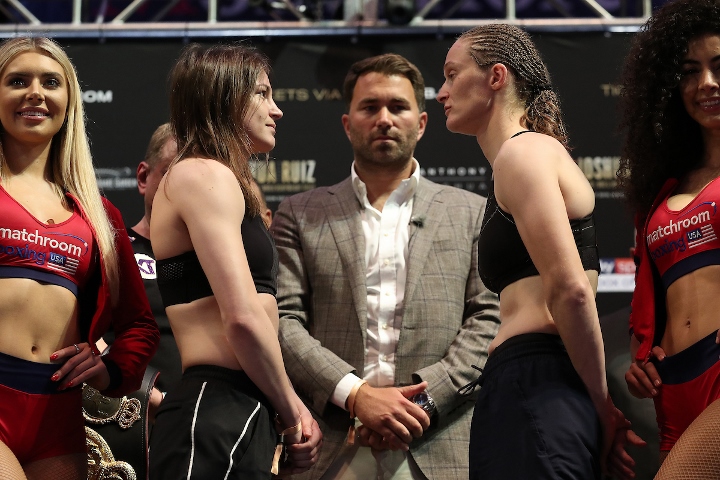 The two boxers will now collide for a second time, to set the record straight, on August 22 in Brentwood. The card will be headlined by the heavyweight clash between Dillian Whyte and Alexander Povetkin.

Persoon is not pleased with some of the tactics Taylor used in their 2019 encounter.

She says Taylor was excessively holding during the bout – and there is little expectation of a fire-fight in the rematch.

“She will run. In the first fight there was a lot of holding, holding, holding. In another country they would tell you: ‘Don’t hold’ then take away a point. But they never spoke about her holding me. In the fourth round her trainer said: ‘Grab her arms!’ Is she going to run and grab me? For the people, that is not a good fight,” Persoon told Sky Sports.

“Ten rounds of running with one or two punches is not a fight that people want to see. Take the first punch, answer, jab, come in, go out. Katie throws one shot, runs away, then grabs. I hope she wants a nice fight – two boxers to go for it, and the best boxer wins. Let’s show that two women can have a spectacular fight. But I don’t think she will.”

“Technically she is a very good boxer, and better than me. But this isn’t three rounds of three minutes, it isn’t amateur boxing. This is pro fighting, this is 10 rounds of two minutes. Punch, run away, punch, run away. People want to see two boxers blocking shots, answering back. Technically she is better than me, I know this. But this is pro fighting, not amateur. Physically we have to go for 10 rounds.”