Krzysztof Glowacki and Lawrence Okolie finally have a timeframe for their long-awaited showdown.

Now all it needs is a firm date and location. 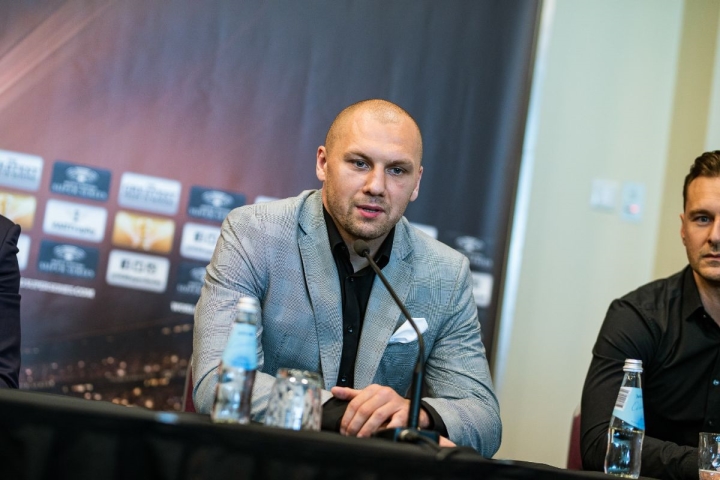 Efforts to secure a venue remain ongoing, although Hearn did reveal—while hosting an Instagram Live ahead of the debut of his ‘Fight Camp’ Series which begins this Saturday—his intentions to stage the event in late November or early December.

Plans for a showdown between Poland’s Glowacki (31-2, 19KOs) and London’s Okolie (14-0, 11KOs) since last December, when the vacant title fight was formally ordered at the WBO’s annual convention in Tokyo. A purse bid hearing was avoided when Hearn assured Glowacki’s team of a deal to be made, with original plans calling for the bout to have taken place this past spring.

There was a point when the fight was to have been packaged on a show featuring two-time middleweight titlist Gennadiy Golovkin (40-1-1, 35KOs) in a title defense versus mandatory challenger Kamil Szeremeta (21-0, 5KOs). Those plans were thwarted by the ongoing coronavirus pandemic, which in turn wiped out an intended June 20 fight date for Joshua’s fight with Pulev.

The WBO belt was stripped from two-time titlist Mairis Briedis for failure to comply with a sanctioning body-mandated rematch with Glowacki. The two were ordered to meet following their controversial title fight last June, which Briedis won by 3rd round knockout only for the bout to generate two separate formal protests by Glowacki’s team.

The latter of two produced the desired outcome—an immediate rematch rather than wait out the World Boxing Super Series (WBSS) cruiserweight final between Briedis and Yunier Dorticos. Briedis chose the latter route, thus resulting in the WBO belt becoming available and with Glowacki and Okolie serving as the two highest rated contenders.

Both boxers accepted the invitation to enter negotiations for a vacant title fight, with a deal reached soon thereafter. The universe hasn’t been quite as cooperative, leaving everyone in limbo though with somewhat of a clearer picture provided by Hearn on Monday.

Glowacki has been out of the ring since his controversial stoppage loss to Briedis last June in the WBSS cruiserweight semifinal round. The official result held up, ending his second reign without making a successful title defense.

Glowacki won his first title in an off-the-canvas 11th round knockout of Marco Huck in their August 2015 war in Newark, New Jersey. One successful defense followed, a 12-round win over former champion Steven Cunningham in April 2016 before conceding the title to Ukraine’s Oleksandr Usyk later that September in his native Poland.

Okolie (14-0, 11KOs) has not fought since recording a career-best win, scoring a 7th round stoppage of previously unbeaten Yves Ngabu last October. The feat capped a 2019 campaign which saw four knockouts in as many fights on the year. The win also helped the 27-year old—whom represented Great Britain in the 2016 Rio Olympic—advance in the WBO cruiserweight rankings at the very right time.