It took all of seven seconds in the opening round for the 28-year-old Estrada (19-0, 8 KOs) to separate the 42-year-old Adkins (5-1, 5 KOs) from her senses. The bout took place on the  undercard of the Vergil Ortiz-Samuel Vargas main event (DAZN) at Fantasy Springs in Indio, CA. Estrada rifled off a couple of picturesque three-punch combinations that dropped Adkins cold on her back. It’s being called the quickest knockout in women’s boxing history. It was also one of the most egregious mismatches in recent memory.

Golden Boy, Estrada’s promoter, might be happy with the result. Foster not so much.

“On paper, hindsight is 20-20 for everybody,” Foster told The Ring. “Now that we know the outcome, I think it’s fair to criticize me for approving that because I’m critical of myself. I kinda blew this one.” 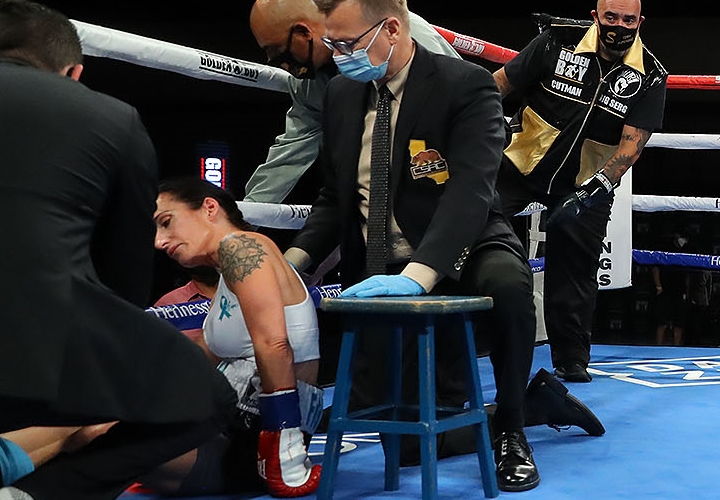 What was disturbing about the knockout wasn’t Estrada’s efficiency so much as her opponent’s utter lack of competency. From her rigid posture to the clumsy way she held up her gloves, Adkins looked like a virtual novice.

A quick look at Adkins’ ledger suggests that she practically was.

Coming into Friday’s fight, Adkins, Topeka, KS, was undefeated through five fights all by stoppage. She began her professional career, however, in 2018, when she was 39. Moreover, four of her bouts were against “fighters” making their professional debut. Two of her opponents never fought professionally again, one of them went on to have two more fights, both losses, and the other she fought twice, stopping her both times.

The Los Angeles-based Estrada, by contrast, is one of the more talented fighters of the lower-weight classes. In her last bout, she notched a career win by earning a technical decision over 2012 U.S. Olympic bronze medalist Marlen Esparza.

Only in boxing can a fighter go from fighting an Olympian to somebody who got off a Greyhound.

In a curious admission, Foster seemed to suggest that if the WBC had not approved the bout for a secondary title, he would not have given the nod.

“If I had to do it over again, I wouldn’t have approved that fight,” Foster said. “I have never denied a (WBC title fight).”

“I certainly didn’t think she was going to win the fight,” he continued. “But I thought it would go longer than seven seconds.”