Some fighters are content to wait on the sidelines until the Covid-19 pandemic passes over, and others, like 23-year-old Brandon Figueroa, go stir-crazy from the inactivity.

The highly-rated junior featherweight from Weslaco, Texas just wants to get in the ring.

The fight is scheduled for September 26 as part of the undercard to the Jermall Charlo vs. Sergiy Derevyanchenko Showtime Pay-Per-View.

“Damien Vasquez. I’ve never heard of him, to be honest,” Figueroa said on a recent episode of the PBC Podcast. 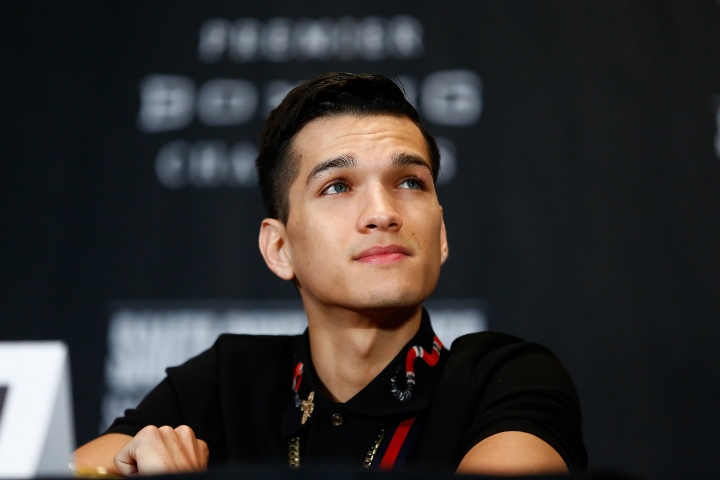 He has certainly heard of Stephen Fulton (18-0, 8 KOs), though, the fast-rising Philadelphian who is slated to take on Angelo Leo for the vacant WBO junior featherweight title on Aug. 1 in the headliner of a PBC on Showtime event. Both share the same manager in Haymon. Still, that hasn’t stopped them from trading salvos over social media for the past year, with both accusing each other of ducking. So who’s telling the truth? For Figueroa, it’s simple: Fulton never wanted the fight when it was first broached.

“I remember a long time ago he fought Adam Lopez,” Figueora recalled. “It was a good fight. [My team] told Al Haymon we wanted to fight either one of them because they were both hot rising prospects. I know [Fulton] said that I wanted to fight him, when he had no fights, but honestly I had [only] three more fights than him at that time. I called out both of them and they said no, and I called out Stephen Fulton again a second time, and he said no. So then I worked my way up to the ranks and now he’s the one that wants to fight me.”

One thing Figueroa wants to make clear is that he has never consciously turned down a fight. Besides, he loves fighting too much to begin with. The more rugged the better. In his last bout, he engaged in 12-rounds of trench warfare against the hardnosed Julio Ceja, fighting to a draw. Of course, Ceja was grossly overweight for that fight – 4 1/2 pounds over the 122-pound limit.

“I’ve never backed down from anyone, I don’t know where [Fulton’s] getting that from, that I’m ducking him,” Figueroa said. “You can talk to Al Haymon. I’m in the position where I’m at because I’ve never said no to any opponent that Al Haymon has thrown at me. If he wants to fight, I’m ready to fight..I’ve been looking for that fight too, but he didn’t want to fight me back then. Now, he’s the one calling me out?

Should the fight go down, Figueroa offered a simple prediction.

“We would either go to a decision or I would probably make him quit in the later rounds,” he said. “[Fulton] doesn’t have that power. He doesn’t have that consistency that I do. I think he’s a good fighter, but not a great fighter to the point that I’m scared of him or that I’m ducking him. If Al Haymon lines up that fight then we can go at it, but I feel like I’ll be the bigger man that night. I’ll just take it to him, like I do with all my opponents and just break him down and finish him in the late rounds.”