By Chris Williams: Shawn Porter believes Errol ‘The Truth’ Spence Jr will have more problems with Terence Crawford’s southpaw stance than he will with his.

With Spence (28-0, 22 KOs) being a southpaw, it’s going to force the 34-year-old Crawford (38-0, 29 KOs) to make adjustments to that stance, as he normally always faces fighters that use the orthodox stance.

Porter isn’t saying it, but he likely figures that Crawford being a highly technical fighter, he’ll easily adapt to Spence’s southpaw stance without any trouble.

He could be right in that aspect, but where Crawford could struggle is with the nonstop pressure that Spence puts on him. Moreover, the power and the body shots from Spence will take a toll on Crawford, as he’s fought a fighter with power that was still in their prime.

The biggest punchers Crawford has faced in the pro ranks are Egidijus Kavaliauskas and Kell Brook. However, neither guy is on the level of Spence, and they folded early against Crawford without getting a chance to put some wear on him.

“I honestly think for him there’s going to be more strategy involved than ever with his switching,” said Shawn Porter to K.O. Artists Sports when asked if Terence Crawford should turn southpaw against Errol Spence Jr, given that he’s a southpaw too.

“I don’t want to give away his [Crawford] game plan from what I’ve seen for how I’d prepare for him, but I can say is if he were to turn southpaw and remain southpaw, I still have a feeling that Errol would have more trouble than he would with the southpaw situation.

“I could be completely wrong, but I think Errol would have a little more trouble, but we’ll see. It remains to be seen. There are so many questions. I’m tired of answering them. I’m ready for that fight to come so I can stop answering the questions.

“I’m pretty sure every Hall of Famer in here has had a trilogy fight. So, yeah, why not?” said Porter when told that there’s a rumor that Spence wants a rematch clause for the Crawford fight.

“Obviously, you don’t want to limit yourself to the possibilities outside of winning that fight or losing that fight. Both guys are trying to be very smart and very strategic. I respect it, and I get it. We’ll get the fight. Everybody has got to be patient,” said Porter. 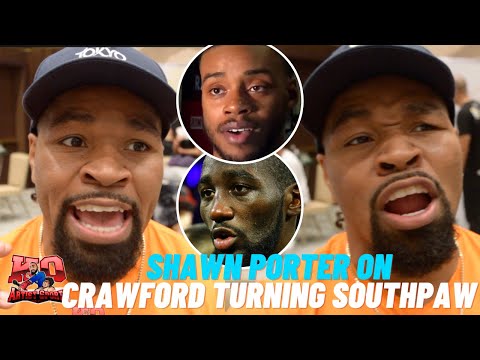