By Dan Ambrose: Andy Ruiz Jr says his weight right now is around 268 lbs for his fight this Sunday night against Luis ‘King Kong’ Ortiz at the Crypto Arena in Lod Angeles.

Ruiz (34-2, 22 KOs) weighed 268 lbs for his upset victory over Anthony Joshua in June 2019. For Ruiz, it’s a good weight for him because he was too thin for his last fight against Chris Arreola, weighing in at 256 lbs.

With that said, Ruiz’s being in good shape weigh-wise doesn’t mean he’s going to defeat the 43-year-old Ortiz (33-2, 28 KOs) in their clash on FOX Sports PPV.

Before Ruiz’s upset win over Joshua, he was always viewed as just an average heavyweight, and he’s done nothing to prove that view wrong since his loss to AJ in their rematch in December 2019.

Even in the best shape, Ruiz isn’t an elite-level or even an A-level heavyweight. He’s just a good B-level guy who took advantage of Joshua being reckless in their first fight.

If the ancient Ortiz is at 80% of what he once was during the prime of his career, he wins going away on Sunday because he’s got the perfect opponent for him to out-box and out-punch in front of him.

“I’ve been doing everything that I was supposed to do. Yesterday, we ate beans. I’m not on a big diet,” said Andy Ruiz Jr to ESNEWS when told that he’s looking thin.

“I’ve been eating good. The main thing and most important thing is putting in the hard work inside the gym. The weight goes off and comes back on whenever it does. We just focus on boxing.

“I’m in the 260s, bro. I weight almost what I weighed when I fought Anthony Joshua [for the first time in June 2019] but with having a little more ability. I feel good,” said Ruiz.

If Ortiz is able to follow the blueprint created by Joseph Parker in 2016 and replicated by Joshua, he beats Ruiz with no problems. The way to beat Ruiz is to jab, stay on the outside and tie him up each time he comes in punching range.

Ortiz can’t allow Ruiz to get his speedy combinations off because he lacks the hand speed to match him in that department. What Joshua & Parker did to prevent Ruiz from getting his shots off was to tie him up. 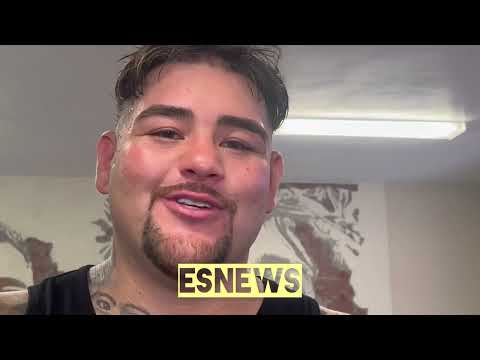