Jake Wightman back to earth after dream summer Jake Wightman is not the type to get too carried away. A more down to earth world champion you could not wish to meet. Even if he were prone to the odd bout of taking himself just a little too seriously, however, the 1500m gold medallist knows he operates within a sport which has a special talent for cutting even the tallest of poppies down to size.

Exhibit A arrived only a few weeks ago. After enjoying his break from a season which had included that stupefying victory in Eugene, as well as Commonwealth bronze and 800m silver at the European Championships, his first winter hill session back with his training group delivered a metaphorical slap in the face.

“My mum was there and a passer-by had asked who we were,” says Wightman, with a rueful chuckle. “Mum told her ‘one of them won the world championships during the summer’ and so the woman came over to ask which one of us it was.

“I said I was and she said ‘oh, well done’. Then we went and did the rep and I was dead last, right at the back of everybody, so she’s either thinking that everyone else [in the group] is an Olympic champion or that I’ve really lost it in those few months!”

Thumping back to reality is all part of the process, of course, but having some precious metal from the summer’s work tucked in his pocket has rather cushioned the blow for Wightman, who is speaking to AW from a training camp at altitude in Flagstaff, Arizona.

Unlike the aftermath of the Tokyo Olympics, where he was left distraught at coming 10th in the 1500m final and attacked the winter with a grim-faced determination which would reap particularly rich rewards, this time he has the moment of his sporting life – so far – to draw upon as an energy source.

July 19, 2022 was the day of days for the Wightman household. His aforementioned mother Susan, herself a former international athlete and Jake’s first coach, was in the Hayward Field stands to watch the world 1500m final, only a matter of metres away from where her husband Geoff – Jake’s dad and current coach – was also calling the race as stadium announcer.

The couple would leave the famous arena that evening having achieved new levels of paternal pride. Their son gambled on himself and won, breaching the seemingly impregnable defences of Olympic champion Jakob Ingebrigtsen and making a sumptuously timed bid for glory with 200m to go which will live long in the memory.

Looking back on the moment that caused his own jaw to drop and which is the prime reason why he has been voted British male athlete of the year in the AW Awards, there is a telling word which Wightman uses more than once to describe how he felt.

“For me, the whole experience – especially the day of the final – was very calm,” he says. “In Tokyo I felt a little bit more like ‘this is the Olympic final, this is a huge moment, I need to run well here, there’s so much riding on this’.

“Eugene was so different. It was [a case of] ‘that didn’t go very well last year. Hopefully it can go well this year. I’ve done everything I can and if the opportunity is there to try and win it, I’ll do that’.

“It’s kind of comforting knowing that there’s no expectation, that you’ve got nothing to lose. It’s just what can you do rather than what should you do? That’s how I saw it.

“In that situation it was like a free ticket, a free pass to just go out there and try to become a world champ.

“I saw my mum in the warm-up area and I could tell she was more nervous than me. I tried to reassure her that it would be fine and that I’d be alright. I didn’t have any stress or nerves. The most dangerous you could be is by just being calm, collected and not panicking in any situation, which is how I felt going into that race.” 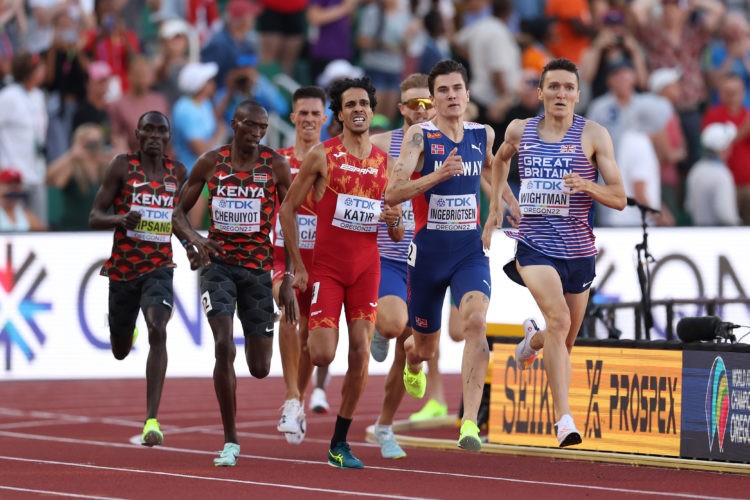 That sensation barely changed, either, even when it came to the moment of truth. Heading towards the final bend, Wightman was right where he wanted to be – on Ingebrigtsen’s shoulder. This was precisely the scenario he had hoped would present itself, but it takes a certain amount of courage to seize an opportunity. Was there not any fear when he changed gear, took the lead and threw all of his cards on the table?

“No, I’ve never really been scared to put myself in a position to try and win races where it could potentially backfire,” he says emphatically. “There have been so many occasions where that’s happened and I don’t think you get the most out yourself without doing that.

“I’ve never been in a position where I’ve been on Jakob’s shoulder with 200m to go, so I think it was a new situation for both me and him.

“And for me to go past him… I felt in control of it but you just don’t know how he’s going to react to it.” 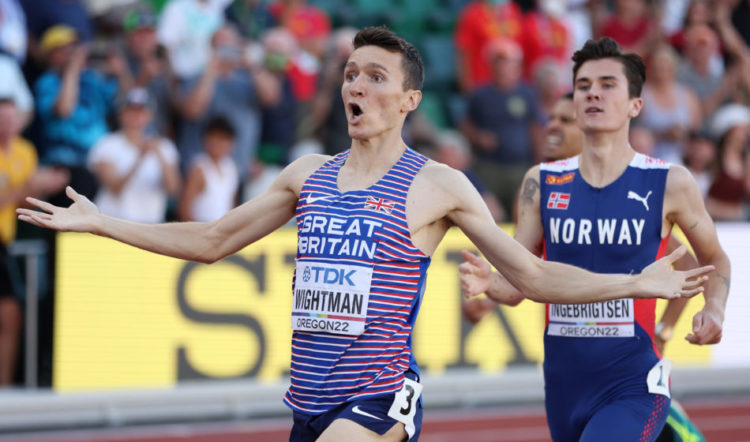 The Norwegian did react, but it wasn’t enough. Wightman was on his way to the line and an experience which will remain seared into his brain.

“The moment of crossing the line for me is the one that you will never ever get back,” he adds. “It was the biggest buzz of the whole thing.

“It was the shock of actually doing it. It’s very different to believe you can do it to actually being able to go out and do it so that whole night was something really, really special.

“It’s also looking back at how many other people were buzzing for you or buzzing about watching it. Not only did I make it special for myself and enjoy it – my mum enjoyed it, my dad enjoyed it, [and so did] my friends and family but also just people watching back home, being able to give them something to get excited about is even more special.”

The hope is that there are more of those moments to come. Wightman cut an understandably fatigued figure at the Commonwealth Games before narrowly missing out on the European 800m title and then also breaking the Scottish record for the distance with 1:43.65 at the Diamond League in Brussels.

With his place in the 1500m at next year’s World Championships already secure due to being the defending champion, he will explore the possibility of adding the two-lap event to his schedule in Budapest.

Qualifying for the British team at 800m is no mean feat in itself, however.

“If I can go to the trials over 800m and show that I would be capable of challenging for medals at the Worlds, that would make me consider trying to double,” he says. “But if I went to the trials and I wasn’t probably winning it, then I would feel like it’s too much of a jeopardy to my 1500m and that would make the decision for me. I’d love to be able to double but it will very much depend on how good my 800m is going to be.”

Wherever he lines up, though, Wightman now does so with added attention. The hunter is now the hunted. Such labels don’t worry him, though.

“To have the satisfaction of knowing I am good enough to do that [become world champion] and therefore I should be good enough to do it again next year and going into the Olympics is something that’s very motivating, especially at this point in my career where I don’t know how many years I’ve got left.

“I know that I’m probably coming into my peak now, so I’ve got to make the most of every single year I’ve got left in this sport.”