By Allan Fox: Trainer Malik Scott is fine-tuning Deontay Wilder’s combination punching and further developing his left hand to turn it into a weapon that he can utilize against Robert Helenius on October 15th.

For Wilder’s return contest against Helenius (31-3, 20 KOs), it’s crucial that he has a full arsenal of punches he can fall back on if he can’t score a knockout with his right hand.

Wilder (42-2-1, 41 KOs) needs an impressive victory over Helenius to increase his chances for a lucrative fourth fight against Fury or a title shot against IBF, WBA & WBO heavyweight champion Oleksandr Usyk.

Losing to Helenius would wreck Wilder’s chances of getting a title shot against Fury or Usyk, and possibly even Anthony Joshua.

Deontay always looks good in training, so it’s hard to tell whether he’s going to be improved for his fight against Helenius. It’s one thing to look good hitting pads, and it’s altogether different to do against an opponent hitting back.

“Who is Fury going to fight if the Usyk fight doesn’t happen?” said Steve Cuningham to Fighthype. “He has to send [Robert] Helenius home with a pillow in order for me to say, ‘Wilder is back,” said Cunningham about Deontay Wilder’s next fight for him to make a case for the fourth contest against Fury. 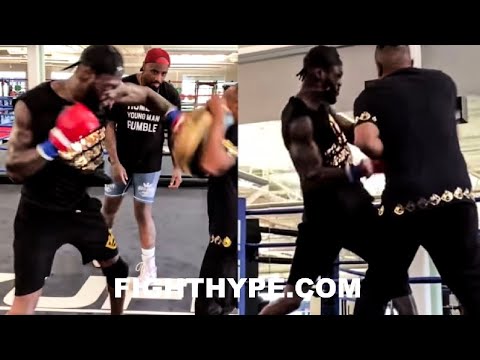 “I know Malik Scott is in there training, getting him right on some technical stuff. If he [Wilder] goes in there and wins a 12 round decision, and Wilder is boxing his brains out, then okay, that’s an elevation too.

“If he looks the same and it goes to decision, nah. I need to see what kind of Wilder that we’re going to fix. That was some serious issues those Fury wars.”

Cunningham didn’t say what he meant by his comment about Wilder potentially looking the same. Lately, that means that he could lose to Helenius because he’s lost his last two fights by knockout to Fury, and he hasn’t won a fight since 2019,