Question marks surrounded Kilian Jornet’s participation in the 2022 Ultra-Trail du Mont-Blanc when the mercurial ultra-distance runner posted the news that he had tested positive for Covid on the eve of the race. The 34-year-old was not showing any symptoms, though, and did not show any ill effects during the 106-mile race either as he clocked a course record of 19hr 49min 30sec.

It was his fourth win in the gruelling UTMB and his first victory here since 2011 as he broke away from French-born Canadian Mathieu Blanchard approaching the final big climb to win by just over five minutes in front of massive crowds in Chamonix.

Tom Evans, the former British Army captain, finished a brilliant third in his UTMB debut. The 30-year-old won the shorter ‘CCC’ (Courmayeur-Champex-Chamonix) race during the UTMB week in 2018 and promised to utilise the strengths he developed during his military career as he stepped up to the main event this weekend.

This background included doing night operations in pitch black minus a torch, which meant he was mentally comfortable with racing through the first night following the 6pm start on Friday (Aug 26). Being able to actually use a head torch, he joked, was amazing.

Evans ran for much of the distance with Zach Miller but he pulled away from the American in the final kilometres and eventually caught and passed Jim Walmsley, who had led overnight but went through a bad patch on Saturday morning as he drifted back through the field to finish fourth with Miller fifth.

Evans clocked 20:34:35 with Walmsley 38 minutes behind and Miller a further 15 minutes back.

Jornet clearly enjoyed his return to the top of the podium as he spent his final stages in Chamonix high-fiving the thousands of spectators lining the route at times around six-people deep.

Evans was also all smiles – and tears – as he cut an emotional figure at the finish line. In a nod to his army background, he even gave a salute at the finish line before being joined by his fiancee Sophie Coldwell – an international triathlete – who he gets married to in two months’ time.

Before the race Evans described the UTMB as the ‘Super Bowl of ultra-distance trail running” and some fans on social media after the race posted that they felt his podium place was akin to a winning a bronze medal at the Olympics or World Athletics Championships.

“What went to plan was listening to my body and backing off a little when it got a little tough,” said Evans. “The hardest part of the race was that it got really hot and I can out of fluids. It was pretty grim but was okay in the end.” 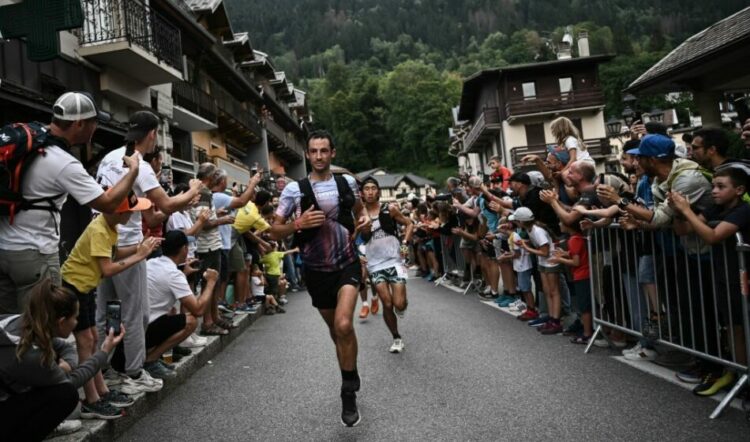 Katie Schide from Maine in the United States improved on her eighth place in 2021 to win the women’s race (finishing 22nd overall) in 23:15:12 from Marianne Hogan of Canada.

Hogan then passed Schide during the race but the American battled back to win. “I had a low moment but someone told me to put my jacket on (because it might help) and I began walking. Marianne looked really good but then I noticed I was taking time on her again during one of the climbs so I decided to keep going and see what happened.

“There were three climbs left at that stage so there was plenty of time to figure it out.”

Schide suffered a nose bleed mid-race and felt nauseous eating sugar on the course, so she began eating cheese instead and it helped get her through the bad patch and powered her to victory.”