To his left was NCAA champion Trey Cunningham, the eventual silver medallist. Inside the American should have been Olympic champion Hansle Parchment, who withdrew at the last minute due to injury. The 2019 world champion and Olympic silver medallist Grant Holloway, who would go on to win gold, was in lane four, while world leader Devon Allen was in lane three – until he was disqualified for a false start.

It was a lot for Joshua Zeller to take in as he lined up for the final of the men’s 110m hurdles at the World Championships, but the former European under-20 champion felt quite at home.

In fact, five weeks earlier, he’d been on the same Hayward Field start line for the NCAA Division 1 Championships final, subsequently acknowledged to be one of the fastest and deepest races in NCAA track and field history. It was won by Cunningham in 13.00, with Eric Edwards second (13.15) and Zeller third (13.26).

“Being in the NCAA is very competitive,” says the 21-year-old University of Michigan athlete. “I wasn’t afraid of anyone [at the World Championships] because I’d run against some serious competition already. I think that set me up really well.”

On one hand it had. What Zeller couldn’t prepare for was Parchment’s unexpected withdrawal and Allen’s controversial dismissal.

“Just before the false start I was very focused, but I took a quick glimpse to my left and I was like, ‘Hang on a minute, someone’s missing’,” he recalls. “Then the false start happened. Devon Allen is obviously a crowd favourite, and that was the toughest part as they were really shouting and upset about it.

“It was a tough call, but I really think I did a decent job of staying composed. I didn’t want to get to a world final and not put out a good race, I’d have been devastated if I’d let that get to me.”

Zeller was born in South Africa but moved to England with his parents when he was three months old. Brought up in Wokingham, near Reading, he joined Bracknell AC as an under-11 and experienced his first significant athletics success with victory in the English Schools under-17 100m hurdles in 2017. It was at that point he started to consider his future in America.

“I spoke to different schools during my first year as an under-20,” says Zeller, who at that time was coached by Adrian Brown. “That summer I got selected for the world under-20 team in Finland. I also ran 13.49 which basically opened doors to every university I wanted to go to in the USA.”

Zeller committed to Michigan on a full scholarship. He started in September 2019 while still basking in the glory of his European age group title, but he was sent home at the onset of the coronavirus pandemic, missing an entire outdoor season. 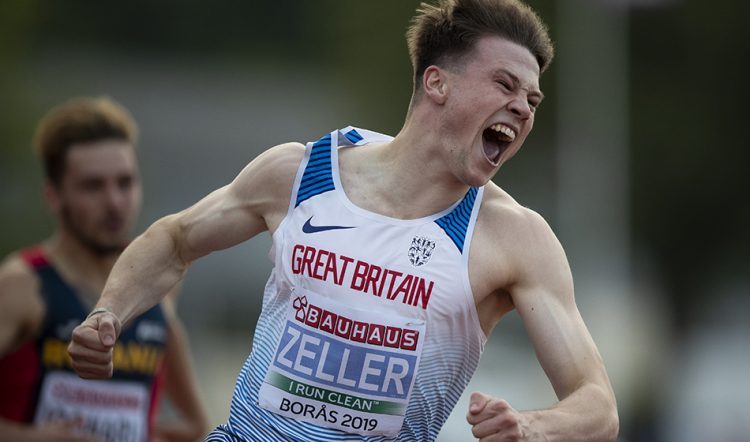 A return to competitive action in 2021, guided by college coach Steve Rajewsky, concluded with sixth place in the final of the European Under-23 Championships in Estonia. It was a good performance, but it was blown out of the water by his achievements in 2022, which, prior to his selection and eventual fifth place at the World Championships, included winning the Big Ten title in a lifetime best and championship record of 13.19, also a Michigan school record and the fifth fastest ever by a British athlete.

“It was good fun to step up to senior level and pull on the GB vest,” reflects Zeller – Britain’s first 110m hurdles world finalist since 2013 – of his Eugene experience. “I learned how to manage rounds a little bit better, specifically rounds on the same day. That was challenging and something I’d never done before at that level.

“There were a lot of people [on the team] who had been around for a while that I’d looked up to; it was like an ‘idols turning into rivals’ type of situation. People I’d looked up to were now alongside me, which was really cool and really inspiring.”