By Dan Ambrose: Deontay Wilder says he’s in top physical condition for his comeback on October 15th against Robert Helenius (31-3, 20 KOs) on FOX Sports pay-per-view at the Barclays Center in Brooklyn, New York.

Deontay has trimmed down his physique with the help of a lot of workouts at the track and hard work in the gym.

Wilder (42-2-1, 41 KOs) has a lot to prove to the boxing public after his consecutive losses to Tyson Fury, and he cannot afford another loss at this point if he wants to remain as one of the major players in the heavyweight division.

Choosing to fight Helenius is a gamble on Wilder’s part, given that he’s coming into the contest with three straight wins by knockout.

Helenius’ last two victories have come against Adam Kownacki, and he looked especially impressive in those fights.

If Helenius lands the kinds of shots on Wilder that he did against Kownacki, he’ll likely score an early knockout on October 15th.

“I’ve been training very, very hard, and I’ve been doing things I’ve never done before. No limitations on me,” said Deontay Wilder to The Schmo. “I thought I was in shape, but this is real true shape.

“I can’t wait until October 15th, me vs. Robert Helenius. It’s going to be an amazing fight. You can find it on FOX pay-per-view. You don’t want to miss this one.

“Right now, we’re trying to cool down things. I’m way ahead of time. We’re trying to figure out how to ease things down, so we don’t suffer any injuries.

“I’m a man of my word. I put my heart out, and I fight with my heart. So I’m willing to go through the fire with whatever I believe in. I die for what I believe in, and for me, the biggest lesson of all is not having limitations.

“So I’m looking forward to displaying and continuing with my knockouts and giving the fans what they want to see.

“I’m back; the excitement is going to continue, and I’m looking forward to doing bigger & better things with the second reign until the end,” said Wilder. 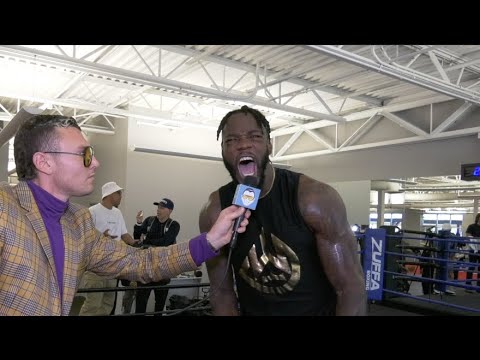