With a fast, flat course and little wind, the course for the Al Mouj Muscat marathon has potential for fast times. This year, however, the temperature was much higher than expected and the times produced reflected this.

That said, there were some great performances in the two main events, the marathon and half-marathon on November 11.

The main contenders quickly established themselves at the head of the fields in both the men’s and women’s events respectively, perhaps recognising that given the temperature it would take a brave effort to go it alone too early in the race.

The course is flat on beautifully smooth roads, forming a predominantly out-and-back route with few turns. The opening and closing miles of each race are within the Al Mouj development in the city which forms a harbour, housing and recreational area.

In the men’s race, marathon specialist Eliud Too of Kenya eased away from the pack in the closing miles to take the win in 2:17:58. Having only raced at the marathon distance since 2016, his winning time was well outside his 2:10:41 personal best but with this win Too adds the Muscat title to wins in Ibiza, Dublin and Bilbao.

Ugandans Bernard Cheptoch and Jackson Kiprop finished second and third, with Cheptoch turning his attention to the marathon this year after acting as a pacemakers in many events.

In the women’s race it was a day of several firsts for the top three athletes. Sophy Jepchirchir stretched away from compatriot, Emmah Ndiwa in the last few miles in what was the first race for both athletes outside Kenya, with Norah Chebet making it a Kenyan one-two-three as she finished third in her debut marathon. 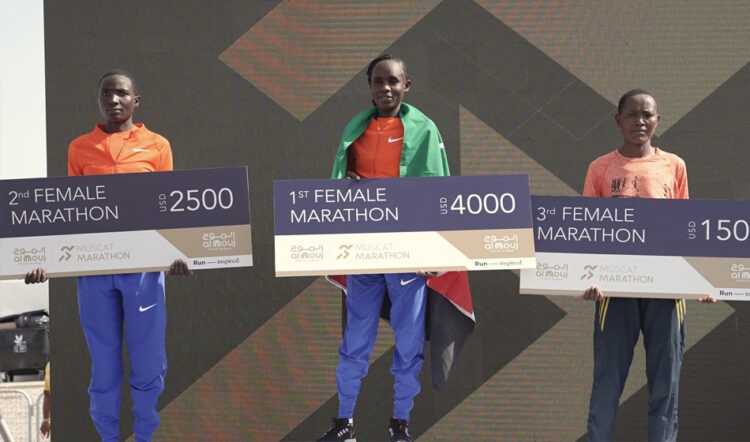 In the half-marathon, the standout performance came from 17-year-old Aynadis Mebratu from Ethiopia in the women’s race. Part of training group led by the husband-coach of double Olympic champion Meseret Defar in Addis Ababa, she sprinted to a comfortable win in 73:21, outside her 67:45 best set earlier this year.

Inyasi Sulley of Tanzania upset Issac Kibet of Uganda in the men’s race as he beat the 60-minute man by just over a minute in only his second race over the distance.