After running first half at sub-2hr pace, the Kenyan slows in latter stages but still takes half a minute off his global mark with 2:01:09 as Tigist Assefa of Ethiopia scores women’s win in 2:15:37

In the days leading up to the 2022 BMW Berlin Marathon the rumours from the Rift Valley were that Eliud Kipchoge was in fantastic shape. The 37-year-old Kenyan is not known for hyperbole either so when he arrived in Germany and quietly predicted that he was looking for a “good race” it was an ominous sign that something special was about to happen.

During a mesmeric display of distance running on Sunday (Sept 25) Kipchoge delivered on his promise and delighted the thousands of spectators lining the route as he took half a minute off his world record of 2:01:39 with 2:01:09.

Amazingly, he scorched through halfway in 59:51 too. But he had to wave auf weidersehen to any hopes of breaking two hours on this World Marathon Majors course as he had to complete most of the second half of the race alone. Despite the vicious early pace he avoided hitting The Wall, however, and held on to not only smash his world record but he scored a fourth victory in Berlin, equalling the achievement of Haile Gebrselassie.

“We went too fast,” he said, admitting that his original plan was to go through halfway in 60:40. Several thousand miles away and talking on Kenyan television, his coach Patrick Sang agreed as he described the pace as “unfortunate … it was too fast for them”.

Still, he cemented his status as the world’s greatest ever marathon runner with a world record that was achieved the hard way – with splits of 59:51 and 61:18.

A half-marathon of 59:51 would have been a world record for that distance alone as recently as 1993. And at the INEOS 1:59 Challenge in Vienna three years ago he managed to maintain that pace for 26.2 miles but on that occasion he was helped by a phalanx of pacemakers for almost the entire distance.

Setting off in near perfect conditions on Sunday morning in Berlin, Kipchoge cruised through 10km in 28:23. At this stage Kipchoge had company as well from Guye Adola and Andamlak Belihu of Ethiopia and they went through their 12th kilometre in a sizzling 2:47 – which is 1:59:26 pace. 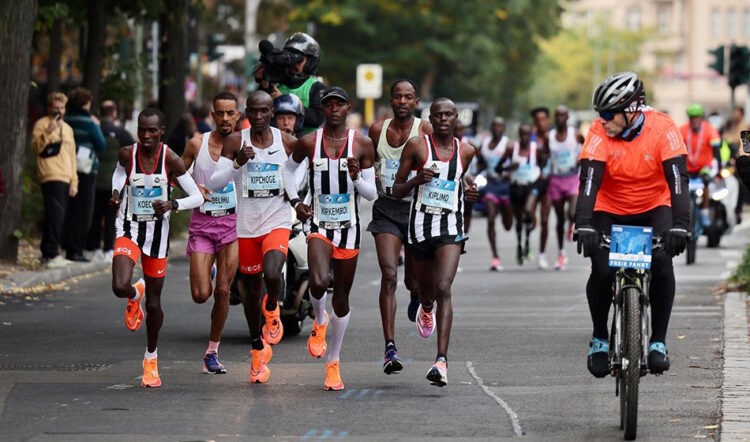 Adola began to drop off the lead group just before halfway, though, and eventually dropped out. Belihu, however, survived until just after halfway and held on to clock 2:06:40 in fourth place, although he was overtaken in the second half of the race by Mark Korir of Kenya, who ran 2:05:58 for second, plus Tadu Abate of Ethiopia, who ran 2:06:28 in third. The first non-African home was Kenya Sonota of Japan in 2:07:14.

Apart from the INEOS event in Vienna, the fastest half-marathon in a marathon before Berlin 2022 was 61:00 in London in 2018. So Kipchoge was now operating at a much faster pace than any runner in history in a standard marathon. Unlike Vienna he did not have any help with pacers either.

Passing 30km in 85:40, it was now apparent the sub-two-hour run was slipping away but he was still more than a minute inside world record pace. 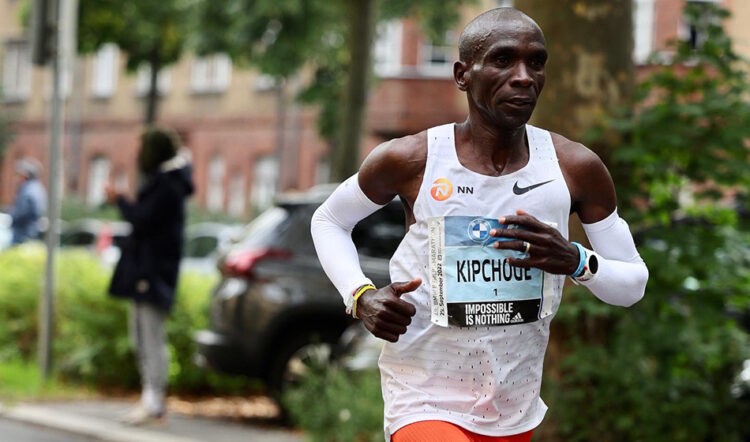 Not surprisingly his speed began to fluctuate and after gradually slowing he ran his slowest kilometre of the race with 3:02 in the 38th kilometre before an even slower 3:11 in the 40th kilometre.

“No limitations,” he said, “after 38km I knew I would be capable of breaking the world record. Circumstances were great, and so was the organisation of the event. I’m really happy with today and impressed by the fans and their support.”

Now, who would bet against him claiming an unprecedented third Olympic marathon title in Paris in 2024?

“There is still more in my legs and I still have a future career. My mind is still moving and the body is still absorbing the training,” he said.

The autumn marathon season has got off to a flying start because the women’s race in Berlin also saw a tremendous performance as Tigist Assefa went No.3 on the world all-time rankings with a phenomenal breakthrough run of 2:15:37.

The Ethiopian has an unusual background as she ran 800m for Ethiopia at the Olympics in 2016 and has a two-lap best of 1:59:24. But the 28-year-old has now moved up to the marathon and ran a modest 2:34:01 to finish seventh in the Riyadh Marathon in March this year before a mammoth improvement in Berlin.

Halfway was reached in the women’s race in 68:13 with Assefa joined by Vibian Cheruiyot, Tigist Abayechew, Workenesh Edesa and Sisay Meseret Gola. By 30km just Assefa, Abayechew and Gola were in the race for the victory but by 35km Assefa had broken away and built a lead of 20 seconds over Abayechew which she extended to the finish.

It meant four women broke 2:19 as Berlin once again lived up to its reputation as a super-fast course.

In the wheelchair races, Marcel Hug of Switzerland won the men’s event in 84:56 ahead of Daniel Romanchuk (88:54) and David Weir (89:02) while Catherine Debrunner of Switzerland took the women’s race in 96:47 – three seconds ahead of Manuela Schär with Susannah Scaroni a further second back.