By Dan Ambrose: Gennadiy Golovkin has his work cut out for him going up against the younger Canelo Alvarez in their trilogy match next month on September 17th in Las Vegas.

The boxing world is counting out the 40-year-old Golvokin (42-1-1, 37 KOs) despite his past success against Canelo in their two fights, which many fans believe GGG deserved to win.

Golovkin hasn’t looked good in his last four fights since losing to Canelo (57-2, 39 KOs) by a controversial 12 round majority decision in 2018.

Rather than continuing to fight quality opposition, Golovkin has been taking tune-ups while seemingly waiting for the big payday he’d get in the trilogy match with Canelo.

Now that Golovkin has finally gotten what he’s been waiting for, he looks old and ill-equipped to win against Canelo.

“I’m picking Canelo. I think Canelo has continued to challenge himself, continued to grow and evolve as a fighter since their last fight, which was in 2019, 2018, something like that,” said Shawn Porter to The Mayweather Channel, picking Canelo Alvarez to defeat Gennadiy Golovkin.

“I haven’t seen the same out of GGG, so I do think Canelo is going to win this fight. I think it’s only a matter of time in this one,” said Porter.

“I don’t think so,” said Jeff Mayweather when told that Porter believes Canelo can win the rematch with Dmitry Bivol. “He didn’t only beat him. He mentally destroyed him.”

“One thing is this. He [Bivol] outworked him,” said Jeff.

“If Floyd Mayweather didn’t mentally destroy Canelo, who can?” said Porter. “Floyd didn’t do it. Granted, he was young, and there were a lot of stories you could tell after a big fight with Mayweather. He was more experienced and all these different things.

“You can’t massage this one the same. So what do you do? You put him [Canelo] in the ring with someone he’s already beaten once, twice, whatever the case may be, and you allow him to destroy that guy, which is what they’re expecting him to do with GGG.

“Give him that confidence to come back to do what they think he can do with Bivol. So, he’s not mentally destroyed,” Porter said about Canelo.

“People may not believe me, but I got GGG. I think he’s going to win the fight,” said Golovkin’s trainer Johnathon Banks. “Am I biased? No. Am I biased for this particular fight? Yes. Does my bias-ness control my decision-making? No,” said Banks.

“I’m going with GGG, possibly by KO,” said Denis Douglin. “I personally thought Canelo won the first two, but his energy is so different. I don’t like Canelo’s energy.

“He’s fighting angry now. Before, when he was coming up, he was having fun. It’s a different energy, so I’m saying GGG,” said Douglin.

“Yeah, he’s like 40 years old,” said Thompson. “So, I’m going to go with Canelo by knockout by the eighth or ninth round.”

“Canelo. I just think GGG is getting a payday,” said Antonio Zepeda. “I think he’s gotten older, and after this fight, he’s going to retire. He already said it. After this fight, he’d financially set for the rest of his life. I think that’s what he’s look at this.”

“I think Canelo is going to beat his a** again,” said Bones Adams. “He knows how to beat him. He’ll have a good game plan. He’s been in with bigger, stronger people, so it’s not going to be a big difference about the power. He withstood his power once, he can do it again. Easy fight for him,” said Adams.

“Canelo again,” said Keith Hunter. “It will be interesting, though. We have to see if GGG ages. It looks like he’s getting old in there. Canelo is more lubricated as far as his vehicle and how he’s moving. GGG looks a little stiff. So we’re going to see if he’s still crafty and has his fundamentals.” 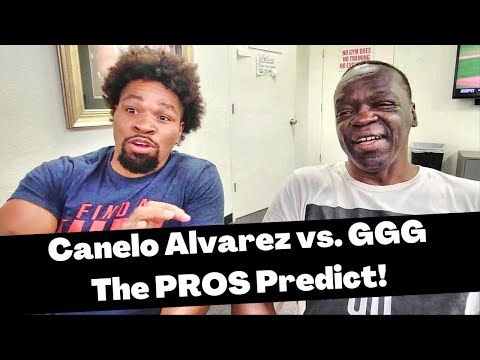