A Dozen Legends of the Ring Well Remembered! By Ken Hissner: Whenever I do an article, especially on the U.S boxers, I get comments adding boxers I didn’t put in, and some, for the most part, are interesting.

Here are a dozen legends, and I look forward to the ones from my readers.

Who other than Muhammad Ali should we start with? He was the most graceful, original, and entertaining heavyweight champion of all. Ali revolutionized boxing in the 1960s and rewrote the history books by winning the title thrice between 1964 and 1978. The impossible was his specialty, and the standards he set will probably never be surpassed.

Ali was the 1960 Olympic Gold Medalist at light heavyweight, having lost in the heavyweight trials to Percy Price from the Marine Corp; he was allowed to participate at light heavyweight. He lost over three years due to his license being revoked. He finished with a record of 56-5 with 39 stoppages.

Henry “Homicide Hank” Armstrong held titles in three divisions, featherweight, welterweight, and lightweight. It was Armstrong’s claim to fame having all titles at once. His battles with Barney Ross, Lou Ambers, and Fritzie Zivic are classics of the ring. Near the end of his career, he even fought the “other” pound for pound best in “Sugar” Ray Robinson, losing a decision. He ended up at 149-21-10 with 99 stoppages.

Speaking of Robinson “Sugar” Ray had a boxing career of over 25 years and 199 fights with a 174-19-6 record with 109 stoppages holding both the welterweight and middleweight titles. He had style, glamour, charisma, and class. Fourteen of his victims were world champs.

Heavyweight champion Jack “The Manassa Mauler” Dempsey became a byword for ferocity, his ring style rooted in his hard and hungry teenage days when he battled in saloons and mining camps for a dollar. He personified the Roaring Twenties, became the game’s first million-dollar attraction, and remains its most enduring symbol. He ended with a 53-6-8 record with 43 stoppages.

Roberto “Hands of Stone” Duran is arguably the greatest lightweight the sport has seen. Duran moved on to win world titles at welterweight, light middleweight, and middleweight in a fabulous career that began in 1967 and was still going in 1996. He is the ultimate warrior who fights for money but relishes the thrill of combat almost as much. He finished with a 103-16 record with 70 stoppages hailing from Panama.

Possibly one of the two greatest heavyweight champions of all time was Joe “The Brown Bomber” Louis, who was one of that rare breed of athletes who transcend their sport to become figures of truly international significance. He held his title more than anyone else, made a record 25 defenses, and became an icon and an inspiration for all. His record was 66-3 with 52 stoppages.

Julio “J.C.” Cesar Chavez held world titles in four divisions: super featherweight, lightweight, welterweight, and light welterweight. He was 31-4-2 in world title fights. His record was 107-6-2 with 85 by stoppage. He hailed from Mexico.

Another legendary heavyweight champion was Jack “Galveston Giant” Johnson, who in his time he was the most hated man in sport, perhaps even in the whole of American society. Still, by the sheer weight of his talent, Johnson forced his way to the top despite every obstacle. He was the first black heavyweight champion, the forerunner of Muhammad Ali in style and spirit. If he had one flaw, it was when as champion, he drew “the colored line,” refusing the fight other colored contenders until forced to go to Paris, France, and draw with No. 7 ranked “Battling” Jim Johnson. His record was 54-11-9 with 34 stoppages.

Unbeaten Rocky “The Brockton Blockbuster” Marciano was crude, stocky, and unskilled – yet nobody beat him in 49 fights, with 43 by stoppage. He had two natural assets, unlimited courage, and a thunderous right, and they carried him to the heavyweight championship. He retired in his prime, the only heavyweight champion with a perfect record.

“Iron” Mike Tyson, in the second half of the 1980s, was unbeatable. The youngest heavyweight champion in history at 20 years, four months, and 23 days, he swept opponents aside with arrogant ease not seen since the prime of Joe Louis. But then it all went horribly wrong, inside and outside the ring, in an unparalleled fall from grace. His record was 50-6 with 44 stoppages.

“Sugar” Ray Leonard had a huge ego but ability to match. He was world champion at five weights, from welter to light heavy inclusive, and he beat middleweight champion “Marvelous“ Marvin Hagler, Roberto “Hands of Stone” Duran, and Thomas “Hitman” Hearns. His final record was 36-3-1 with 25 stoppages, and was the 1976 Olympic Gold Medalist at light welterweight.

World Flyweight champion Jimmy “The Mighty Atom” Wilde was referred to as “the ghost with a hammer in his hand!” He was the man who proved, once and for all, that size doesn’t matter. He never scaled more than 102 lbs. in his fighting prime, yet 98 of his 135 opponents failed to last the distance with this punching little Welshman, whose championship career stretched from 1914 to 1923. His record was 131-3-1 with 98 stoppages. He was from Wales, UK. 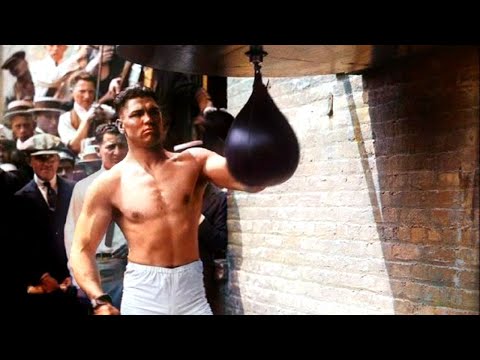