Fury & Joyce are too big for Usyk says Frank Warren That said, Joyce already lost to Usyk a decade ago when the two fought in the World Series of Boxing in a five-round bout. However, that was a long time ago, and Joyce was much lighter than he is now.

The speed and mobility difference between the still remains, as Usyk is quicker and far more mobile.

Last weekend, Usyk (20-0, 13 KOs) defeated Anthony Joshua in a rematch in Jeddah, Saudi Arabia. The win for Usyk was his second over Joshua, whose career is now on the brink of failure after a decade in the pro ranks.

Usyk says he now wants WBC champion Fury, and if he can’t get that fight, he may be done with the sport. With Fury expecting a king’s ransom for the undisputed clash with Usyk, it remains to be seen whether that fight can be made.

It’s obviously not a good sign that Fury is openly telling the promoters to open their checkbooks for him.

“I was watching it, and I felt I liked Usyk. I liked what he did, but I feel a real big heavyweight – I’m talking about a heavyweight who has got good whiskers, who’s got good work rate [would beat him],” said Warren said to Sky Sports.

It’s unclear whether Joyce or Fury has the athleticism to defeat Usyk at this point in their careers.

Both guys have packed on a lot of weight in recent years and are scaling in the 260+ lb region, which could prove to be too heavy for them to beat a fast & highly mobile smaller heavyweight like Usyk. He threw over 700 punches in his win over Joshua last weekend, and that’s a number that Joyce & Fury are incapable of matching due to their size.

“Joe, for example, he’s got good work rate, he’s got a very good chin,” said Warren. “I think he gives him a lot of problems, and I think Tyson gives him huge problems as well. I think they’d be just too big and have too much ammunition for him.” 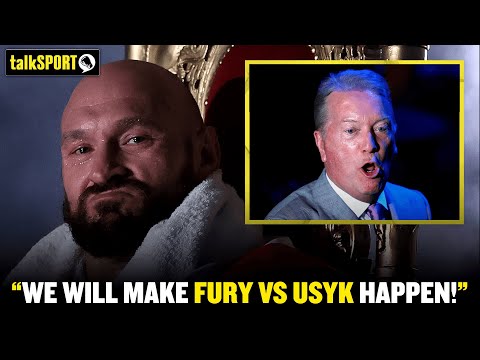